The picture news of Sokoto-born Usman Yahaya, a medical student on the state scholarship in Russia painted, elicited sympathy when the news hit the airwaves. Deep down, there were claims and counter-claims report ADENIYI OLUGBEMI. 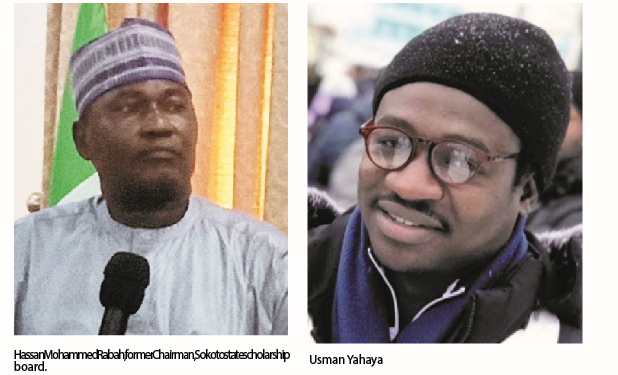 The news of a brilliant Sokoto-born Nigerian medical student in Russia, Usman Yahaya, arguably the best African medical student at Irkutsk State Medical University (ISMU), with a 5.20 GPA grade and a Fellowship Certificate from the Russian Centre for Scientific Research (RCSR), allegedly detained at a Russian immigration camp at Angarsk Irkutsk, by authorities of the European nation’s Immigration, indeed went viral.

To the chagrin of Sokoto state government, sponsor of Usman Yahaya, through the Sokoto State Scholarship Board, the online medium on who’s platform the report trend, for reason(s) best known to them, damage the iota of integrity left in them, by offering their platforms to a serial liar.

Tambuwal said, “I wonder how someone who claimed he is in jail could be sending out series of recorded videos and some so called journalists will believe such.

“Those so called journalists never go beyond the four walls of their cocoon to verify source of such videos. At least, the Nigerian embassy in Russia is there for them to do their checks and balances.”

Undeterred, Governor Tambuwal said, the uncharitable news is not enough to dampened the state government decision to get brilliant and determined students, the best and affordable education anywhere in the world.

To the student who were recently evacuated from Ukraine back home, the governor dropped the cheering news that, the state government through the scholarship board is waiting for them to complete the current going session which has been going online, before transferring them to other foreign universities, to complete their studies.

Yahaya, in an interview he granted an online medium attributed his predicament to the Director, Foreign Students at the Sokoto State Scholarship Board, Kabiru Labaran, for allegedly tampering with his foreign bursary, approved yearly by the state government, since 2016.

“Because the university they took us to study was newly-established and substandard with poor teaching methods, many parents, most especially Sokoto elites relocated their children to other universities. Some were transferred to the universities inside Sudan, while to other countries like the UK, Russia, Uganda, and Egypt, leaving only children of the poor masses at Nahada College.

“In late 2015, I wrote to seek relocation of study, as many others did and my request was approved to go to Russia. A new sponsorship letter was issued to me on July 18th 2017, in that regard.

“Earlier in May 2017, when I was told that my request was approved by Governor Aminu Waziri Tambuwal, I returned to Nigeria to claim my scholarship stipends. But on checking my files in the Scholarship Board it was documented that the payments for the 2015/2016 and 2016/2017 academic sessions were paid to me, which was not true.

“And then, the years were calculated as part of my years of initial sponsorship to Sudan. When I asked questions about the funds, the then Director-General, Alhaji Murtala and the current Director of Foreign Students, Kabiru Labaran, threatened to remove me from the state government beneficiaries for asking too many questions.

“Therefore, I was afraid and backed off because of their threats but the payments for the above mentioned years were documented as paid to me, which is untrue.

“Since then, It was compulsory that on every payment I received from the government, I must pay a kickback to the Director of Foreign Students of the Scholarship, Kabiru Labaran. These payments are sometimes through the persons I assigned to receive my payment by cash and sometimes through the bank transfer of which I have the transfer proof to back up my claims.

“Furthermore, payments for my tuition and upkeep allowances for the year 2018-2019 were approved by Governor Tambuwal, but the Director of Foreign Students, in collaboration with some of the Scholarship Board Staff, vehemently short paid my scholarship stipends to the sum of N800,000, as against the governor’s approval. Also when I demanded the refund of my money, the officer threatened that it would affect my subsequent payments if I ask too many questions.”

Corroborating part of Usman Yahaya claims, former Chairman of Sokoto state scholarship board, Hassan Mohammed Rabah, confirmed that, Usman Yahaya, had a five-year scholarship to study medicine in a Sudan University, from 2014 – 2019.

But, after a year in Sudan, Usman Yahaya, came up with an application to transfer his studies from Sudan to Russia.

Rabah said, “despite realising that Usman Yahaya has issues with the university in Sudan, the then, Commissioner of Education went ahead and approve his application with the proviso that, it will be at no additional cost on the state government. This is after Usman Yahaya had spent one year in Sudan.

“On getting to Russia, he had to spend one year learning the language, meaning two years already gone. At the end of the five years scholarship, he started coming up with funny tales

“At a time, he went and hide himself in a bunker and came up with stories that, he was sick and will need to undergo two stages of surgeries. His Excellency, Governor Aminu Tambuwal was magnanimous enough and, graciously approved money for his ‘treatment.’

“Later, he started sending fictitious letter requesting for money, which we found out were not from his university when we got in touch with his university.”

Countering Yahaya’s claim that, he is currently in detention and had been suspended from ISMU over his inability to make payments and get registered for his final-year medical examination, Hassan Rabah, denounce such claims as, “tissues of lies, meant to steer up undeserved sympathy and blackmail the state government.”

Rabah narrated that, “a fellow Russian student from Sokoto state confirmed to us that, he saw Usman Yahaya, who claimed to be in detention, two days ago, at the university sports complex.

“We also have information that, he got married to a Russian woman, who he has issues with and, he is desperately looking for money everywhere, which pushed him to blackmail the state government.

“We are in touch with the university, he is still in the university, with a semester to go. We are pleading with the governor to magnanimously settle his remaining fee of four thousand eight hundred dollars (which he put at twelve thousand dollars), for him to complete his studies.”