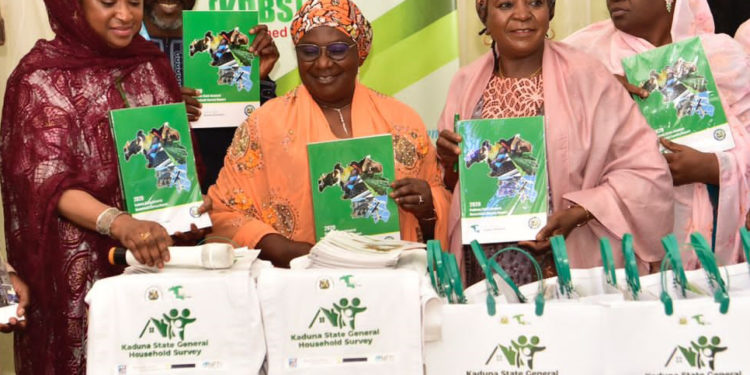 Acting Governor of Kaduna state, Dr. Hadiza Balarabe, has noted that reliable and realistic data is very important for everyday life and planning at personal as well as official levels.

Dr Balarabe who unveiled the report of the 2020 Kaduna State General Household Survey, added that ‘’all credible governments have created as their core, a culture centred on evidenced-based decision making. Kaduna state is not left out of this.’’

According to her, demographic and health data are important prerequisites for monitoring health, social and economic sectors for development indicators in the state.

The Acting Governor further said that regular and credible collection of data and their dissemination will enhance decision-making.

While noting that the Kaduna State Bureau of Statistics developed the first General Household Survey seven years ago, she said that the aim is to create a comprehensive health and demographic health evidence database.

She added that the Bureau ‘’made a tremendous effort to investigate the range of health concerns that influence women and children’s lives as well as to improve the ability to collect critical data on these populations.’’

Also speaking, the Commissioner of Planning and Budget, Hajiya Umma Aboki commended Governor Nasir El-Rufai for his support and guidance in building a very strong statistical system in Kaduna state.

She said that his political will ensured that a minimum standard of official statistics is institutionalized in the State Bureau for Statistics, which she described as “second to none in the country”.

According to Hajiya Umma, the survey was funded by the Kaduna State Government with the support of Bill and Melinda Gates Foundation, to provide ‘’up-to date data in health and demographic indicators, particularly maternal and child health, fertility, family planning and nutrition at the state, zonal and local government levels to meet the monitoring and evaluation needs of the SDGs and support the achievement of the State Development Plans (SDPs). ‘’

Speaking at the event, the Statistician General of Kaduna state, Dr Bukar Baba Alhaji, said the survey is a cross sectional quantitative model that divided the state into 30 clusters with different stratifications.

An interactive dashboard was also launched that allows Kaduna citizens to interact with the data which will guide MDAs in monitoring and evaluation of programmes and service delivery in the state.