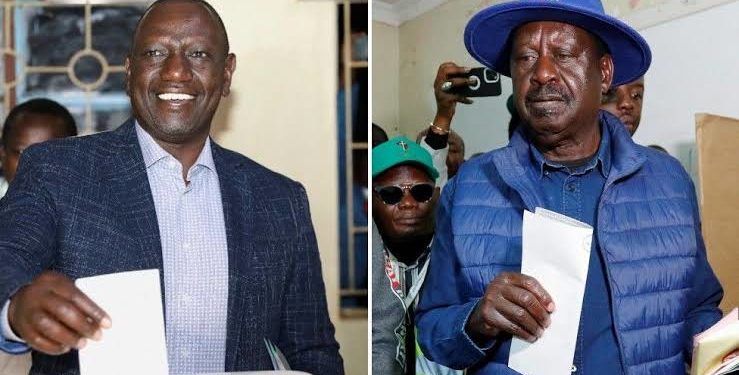 After a week of intense suspense and anxiety, Kenya finally concluded its general elections with

He defeated Raila Odinga, 77, former Prime Minister of Kenya (2008–2013) and leader of Orange Democratic Movement, under Azimio la Umoja One Kenya Alliance; in what started as a keen contest.

Other candidates were David Waihiga Mwaure, leader of Agano Party; and George Wajackoyah, leader of Roots Party of Kenya.

The Independent Electoral and Boundaries Commission (IEBC) declared Ruto as having garnered 50.5 percent  of the total votes cast  (7.1 million) while his main opponent, Odinga, got 48.9 percent of the votes (6.9 million).

Sadly, but not outrightly unexpected, the conclusion of the exercise is beginning to leave a sour taste in the mouth, considering the drama within the electoral body and the outbreak of post-election protests and violence in some areas.

Four out of the seven national electoral officials rejected the outcome of the election.

This is in spite of the accolades from many watchers including the United Nations that the voting process was peaceful and calm.

The take always from the Kenya experience has been quite insightful since the election started on August 9.

Besides voting for their fifth president since 1963, they also elected members of the National Assembly, Senate, governors, county women and members of the 47 county assemblies.

The campaigns prior to the Kenya election were not thoroughly issue-based as the back and forth between Odinga and Ruto bothered more on class politics framed as hustlers versus dynasties. Nevertheless, presidential debates were fixed.

Expectations of a robust debate was cut short as Odinga and Wajackoyah dropped from the presidential debate. The first round was to have Mwaure and  Wajackoyah go head on, while Raila Odinga and William Ruto face off in the second tier.

Odinga argued that he could not debate with Ruto, whom he accuses of having questionable integrity. Wajackoyah’s demand to debate with the two main presidential candidates was not met. Mwaure and Ruto were featured alone in their respective sessions.

However the voting process was largely peaceful even though the exercise was postponed in some areas due to security concerns.

Also, voting was affected by the failure of the Kenya Integrated Elections Management Systems (KIEMS) to pick voters’ fingerprints.

IEBC allowed the use of manual register in parts of Kakamega and Makueni counties after a blight of hitches from the KIEMS kits. Some polling stations opened later than the stipulated time of 6 am, leading to delayed voting.

By midday of election day, 6,567,859, constituting 30 per cent of registered voters had cast their ballots.  An hour to the closure of polling centres at 5pm, the electoral commission reported a voter turnout of 12,065,803 equating to 56.17 per cent  of registered voters.

On 10 August 2022, IEBC announced that  14 million Kenyans, who were identified electronically, had voted bringing the total percentage to 64.6 per cent.

Also, electoral officials had blamed the delay in announcing the result of the country’s presidential election on candidates’ agents for slowing down the national tally of votes.

The IEBC chairperson, Wafula Chebukati, accused party agents of approaching the process like a “forensic audit,” saying they were disrupting the process.

Kenyan election law requires designated poll officials known as returning officers to bring physical forms showing results from across the nation to the tallying center in the capital Nairobi.

Three days after the polls closed, 99.94 per cent  of results from polling stations have been submitted electronically, but only a small number have been verified and announced by the IEBC.

The wait heightened anxiety across the country as Kenyans waited eagerly to find out the winner of the presidential race. Provisional results tallied by major TV stations showed frontrunners Raila Odinga and William Ruto neck-and-neck in the race.

This was in spite of the fact that The IEBC had until Monday, 15 August, to announce the winner.

Ruto had accepted the polls and pledged to be a president for all. Odinga rejected it, saying that the process was unconstitutional and illegal. Thankfully, he is heading to the court to challenge the outcome, rather than incite violence.

As a newspaper, we call for calm. But this can materialise when all the key stakeholders commit to ensuring justice, fairness  and stability and act manifestly in accordance with the law.

President Kenyentta should urgently ensure that the situation does not escalate, he cannot leave office with the legacy of a destroyed Kenya. Also,  the political candidates should rein in their supporters by disassociating themselves from any resort to violence and appealing for calm.

It’s sad that the electoral body is already split. But the legal system, having come to the rescue in 2017, should remain above board. Clearly, the judiciary beyond having to affirm its integrity would be required to ensure stability in Kenya which in turn ensures stability in the region. While Africa ought to have come of age with regards to conduct of elections, she cannot afford any form of crisis in these times of global economic uncertainty.

We are mindful of the need for all actors in Nigeria’s electoral system to deliberately endeavor to surpass the performance in Kenya. And we would hope that Nigeria, which holds its much-anticipated general elections next year, is watching closely.

Thankfully, the Independent National Electoral Commission (INEC) was highly represented in an observer capacity at the Kenya election. It goes without saying that the INEC, having performed above board in the Ekiti and Osun elections, will strive to improve on its performance in the general election.

We would also hope that our presidential candidates will take a cue from their counterparts in Kenya by ensuring that the elections are peaceful through their commitment to peaceful processes.

But there is more to expect from the candidates. The need to have issue-based campaigns cannot be overemphasised. Although enough of that was not seen in the Kenya experience, we are worried that the quality of engagement heading into the campaign season in Nigeria leaves much to be desired.