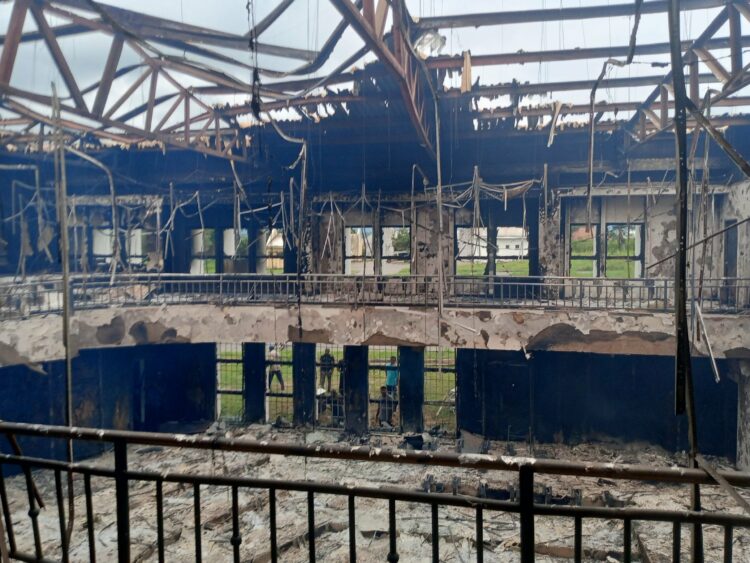 The Kogi State government has initiated a probe into the fire incident which gutted the state House of Assembly yesterday.

In a statement, the commissioner for Information, Kingsley Fanwo, said the state government wished to inform the people of Kogi and other Nigerians that the House of Assembly had been razed down by fire.

He said the sad incident occurred in the early hours of yesterday.

According to him, security and technical experts have started working hard to unravel the cause(s) of the inferno which caused significant damage to the complex.

Fanwo said the state government would inform the general public of findings as they unfold.

The commissioner said the state government would make temporary arrangements to ensure that legislative business was not halted as a result of the unfortunate incident.

Meanwhile, the Dangote Group has said it was not involved in the fire outbreak at the Assembly complex.

The group and the state government have been on the warpath over the acquisition of the land occupied by Dangote Cement Factory in Obajana.

The House of Assembly’s resolutions and directives led to the executive arm of government’s decision to take over the plant.

In a statement signed by the group’s chief branding and communications officer, Dangote Industries Limited, Anthony Chiejina, he said: “Our attention has been drawn to a circulating press statement issued by the Kogi State government, wherein the Dangote Group was accused of allegedly sponsoring arsonists to set the Kogi State House of Assembly on fire in the early hours of October 10, 2022.”

The statement titled, ‘Obajana: Desperation sets in as imported hoodlums burn down Kogi Assembly’, which was signed by the Kogi State commissioner for Information and Communications, Kingsley Fanwo, pointedly accused the company of burning the Complex in an attempt to possibly destroy evidence relating to the ownership tussle between the Kogi State Government and the Dangote Group over the Obajana Cement Company.

Dangote Group said:  “as a socially responsible corporate entity, we totally refute this allegation and condemn this unprofessional and irresponsible attempt to smear our image before local and international investors and thus erode our brand value.”

“Dangote Group would never stoop so low as to sponsor thugs to destroy any property, belonging to either government or any individual. This runs contrary to our business ethos and everything we stand for as a leading manufacturer with teeming customers and consumers across Nigeria and Africa.”

It added that “our lawyers have been mandated to react appropriately to the damaging allegation from the Kogi State government within the full extent of the law.

“We urge our stakeholders and the public to disregard such irresponsible and insane statements as we ask all our stakeholders, namely shareholders, customers, suppliers, employees, and the entire community of Obajana and Kogi State at large to remain calm while we follow the legitimate and lawful process to resolve this matter with the state government.”

The fire which gutted the hallow chamber and gallery of the Kogi State House of Assembly was said to have started at about 5.00am, on Monday morning

The cause of the fire could not be ascertained at the time of filing this report however, the deputy governor of Kogi State, Chief Edward Onoja, has said security operatives would dig the fact out in no time to unravel the mystery.

Onoja who was flanked by secretary to the state Government, Dr Folashade Ayoade-Arike and some members of Kogi State Assembly, further  pointed out that since the creation of the state in 1992, no fire outbreak on government properties had reached this magnitude, noting that all machineries would be put into use to get the mysteries behind this colossal loss exposed.

He promised that when the investigation is completed the government would swing into action to reconstruct the Assembly, noting that right now the complex remains sealed.

Responding to an allegation that some people are behind this enormous destruction of the assembly complex, the number 2 citizen of Kogi State averred that as a government they could not cave in to such speculation, stating that the security report would be solely relied upon.

According to the speaker of the Assembly, it’s mysterious to notice such a fire outbreak, there has been no light in the Assembly for quite some time now, stressing that the issue about electrical malfunctioning should be ruled out completely.