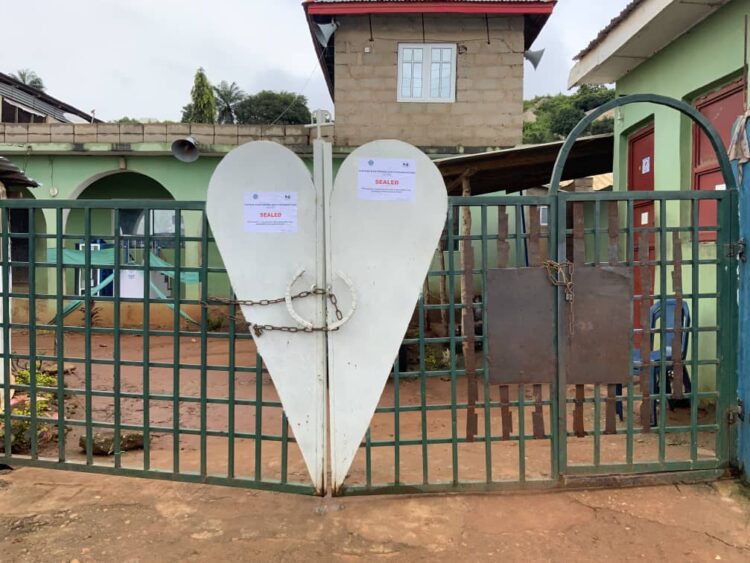 The church has been in the news for defrauding members by selling anointed water named “Bulletproof Water” and running an unapproved medical facility without a license.

The Pastor of the church popularly known as Peter Adeiza, a music artiste turned pastor, is said to have been operating the facility since the 2008 and several people were said to have lost their lives as a result of his Illegal and unhygienic medical practice.

Effecting the governor’s order, Security Adviser to the Governor, Commander Jerry Omodara in company of the Information and Health Commissioners, Kingsley Fanwo and Zekeri Usman, other government officials, agencies and security agents, stormed the church to close it down.

Upon entering the church premises, almost 100 people were seen in the building that was said to have been approved to be a residential area. It was discovered that aside housing a hospital that is used for taking deliveries and treating sicknesses illegally, it was also used as a psychiatric and rehabilitation home as several people were seen with chains in their hands and legs.

Members and worshippers confirmed that they have been receiving treatments for different ailments from the “Man of God”.

Yunusa Sanusi, a member of the community said that his wife was invited to the church as a result of an internal disease that was threatening her life but she lost her life afterwards. Sanusi said, “the pastor called me to come and pay for blood transfusion and I paid over N13,000 but he didn’t do anything.”

He added that, “it took the intervention of the Community before the pastor could release the corpse of my wife to me.”

According to the Security Adviser, the pastor had earlier been arrested following a preliminary investigation by the State Investigation Bureau of the Police and the Department of State Services, which looked into his bizarre activities.

Omodara added that there were enough documented evidences that indicate that what he practiced is contrary to both religious and conventional medical practices.

While addressing journalists, the Information Commissioner, Kingsley Fanwo, said: “we are here for the singular purpose of carrying out the order of the governor to see what is happening here and see how to safeguard the interest and health of our people.”

On his part, the Kogi State Commissioner for Health, Dr. Zekeri Usman said that the health of residents and citizens of Kogi state remains top priority of the government and they as a government will not tolerate any act that can threaten the health and peace of its citizens.

His words: “we are not here because of the spiritual things going on here because the people have the right to any religion. We are here because of medical quackery that is being practiced here where babies are being delivered by people who are not trained or licensed to carry out such acts.”

The Commissioner said that it is the directive of the governor to seal off the premises as well as send signals to all other worship centers that practices quackery. He said “Kogi State Government has declared a state of Emergency on all forms of Medical quackery and the government will not spare any worship centre that is involved in such criminal act irrespective of the religion.”

Commissioner of Police, Edward Egbuka represented by Okene Area Commander, ACP Ibrahim Usman, said that the Police and other security agencies are on ground to ensure that the premises remains sealed as well as maintain law and order.