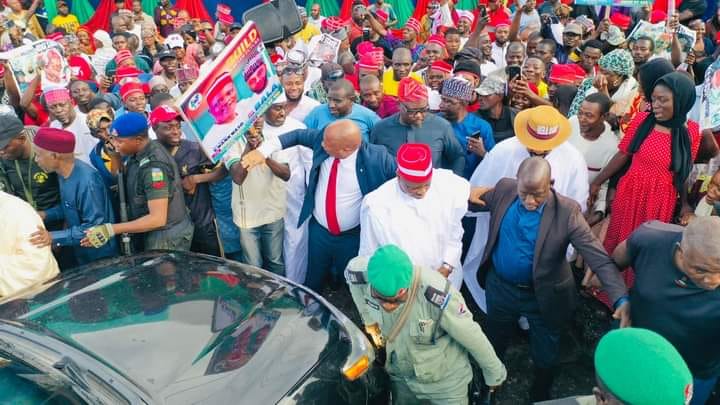 The presidential candidate of the New Nigeria Peoples Party (NNPP), Senator Rabiu Musa Kwankwaso, was on Wednesday booed and pelted with sachet water by unidentified persons in Lokoja, Kogi State.

Kwankwaso was in Lokoja, the State capital to commission the NNPP secretariat and his campaign office.

The former Kano State governor had earlier visited the country home of his late friend and former governor of Kogi State, Prince Abubakar Audu, in Ogonicha, before returning to the State capital for the commissioning of the party offices.

But shortly after the commissioning of the campaign office located beside Dave Mercy Pharmacy, along the Government House road, an angry mob started to boo Kwankwaso and pelting him with sachet water.

The NNPP presidential candidate, who had arrived in a motorcade with few party supporters, was shouted down by the mob and all efforts to pacify them fell on deaf ears.

Kwankwaso was later whisked away by security agents to a nearby Popular Hotel.

On getting to the hotel and while trying to address NNPP supporters, the hoodlums in their numbers invaded the venue.

It took the intervention of his security details to disperse the hoodlums and bring the situation under control.

The angry youths accused of trying to hide under the canopy of the late former governor Abubakar Audu to woo the the supporters of the All Progressives Congress (APC) to NNPC.

Also, dissatisfied NNPP members, who spoke to journalists on the condition anonymity, lamented that having waited for Kwankwaso since the early hours of the morning in Lokoja, the presidential candidate abandoned them for a faction of NNPP in the late former governor’s country home, whom they claimed are still members of the APC.