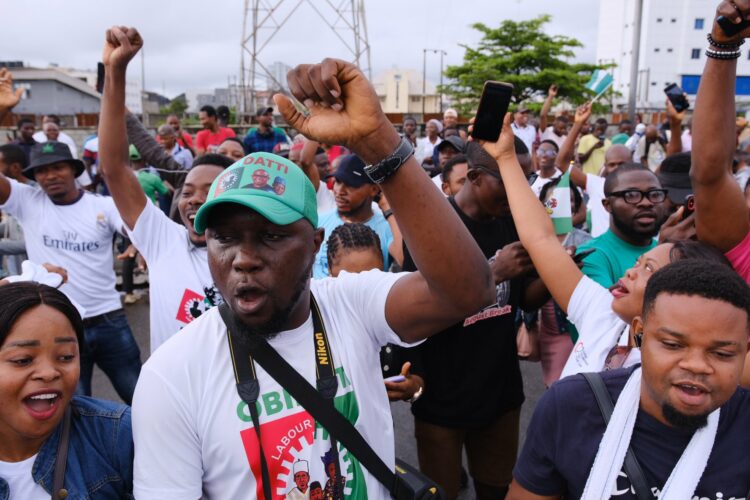 The Labour Party (LP) and teeming supporters of the presidential candidate of the party, Mr. Peter Obi yesterday trooped out in large numbers amid rain and heavy police presence to drum up support for Obi and his running mate, Datti Baba-Ahmed, in    large marches held at Lekki, Surulere, Festac and Ikeja areas of the state simultaneously.

The supporters defied the rain and occupied the major roads, thereby causing serious traffic gridlock across the state. At the Lekki Toll Gate, they held their march peacefully.

A court order had barred planners of the rally led by the Labour Party and NCFront from staging any rally at the Lekki Tollgate.

The Lagos State Police Command followed this up with a statement barring anyone from marching at the Lekki Tollgate.

The statement was signed by the spokesman of the command, SP Benjamin Hundeyin.

So also was the request for the planners to use the National Stadium in Surulere not granted at the time the rally began early yesterday.

The supporters, who were mainly youths, were seen singing and dancing to songs of late Fela Anikulapo Kuti.

In Surulere, the supporters started their rally from the National Stadium in a mammoth crowd wearing the Obi-Datti campaign shirts. They walked down to Ojuelegba where some commercial bus drivers and conductors joined the rally and moved to Fadeyi.

The supporters chanted; ‘ Obi For President’, ‘ We want good governance’, ‘We are tired of bad governance ‘ and so on,  and waved the Nigerian flag and the Labour Party flag as they moved.

A member of the organising committee, Barrister Promise Adewusi, told journalists that the rally was  peaceful across Lagos State.

He said; “The rally is massive and peaceful. The police and soldiers have been so friendly with some joining to sing. No ugly incident so far, we hope there won’t be any. We’ve gone past Ojuelegba, approaching Fadeyi from the National Stadium to terminate at Maryland.

“It’s been so orderly with agberos, drivers and passengers who have to endure slight inconveniences passing through the crowd hailing, applauding and shouting that they are tired of eating agbado (corn). Our police escorts have had virtually no work to do as the mass movement of the people is so peaceful and orderly.”

Another supporter, Olaronke Dawodu Kolade, said the support for Obi/Datti candidacy was to entrench good governance, adding that the youths were tired of the old order.

“Youths are tired of misrule and bad governance, poor power supply, unemployment, economic hardship, insecurity. No visible infrastructure development. Youths do not want to spend 10 years for a course of  four years in our universities anymore. Nothing is working in Nigeria. We believe in the Obi/Datti candidacy,” Kolade said.