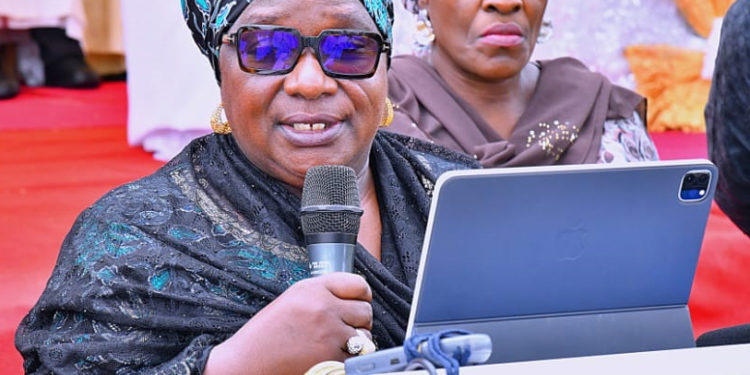 Deputy Governor of Kaduna state, Dr Hadiza Balarabe, at the funeral service of the late Most Reverend George Jonathan Dodo, the Bishop of Catholic Diocese of Zaria, which held at St Joseph's Minor Seminary Wusasa, Zaria

The Deputy Governor of Kaduna state, Dr Hadiza Balarabe, has described the late Bishop of Catholic Diocese of Zaria, Most Reverend George Jonathan Dodo, as a spiritual guide and peacemaker.

The Deputy Governor led a delegation of senior government officials to the funeral service of the late Bishop Dodo at St. Joseph’s Minor Seminary at Wusasa, Zaria.

Dr. Balarabe who noted that the deceased was the first Bishop of the Catholic Diocess of Zaria, further said that Kaduna state is grieving because it has lost a spiritual father, ‘’a guide, a peacemaker, a brother and a friend.’’

Dr Balarabe further said that the late Bishop was committed to peace building among adherents of different faiths.

According to her, the late Bishop Dodo shall be greatly missed by all peace lovers in Kaduna state, especially Kaduna state government and the State Security Council.

The Deputy Governor further said that Bishop Dodo’s tireless dedication to the service of Jesus Christ and the Church was an inspiration to many Christian faithful.

Dr Balarabe added that the deceased’s life was marked by ‘’purposeful living and has left an indelible imprint on this Diocese and the State at large.’’

“The state governor, Malam Nasir El-Rufai, would have loved to personally pay his last respects but for other pressing state matters. He, however, asked me to specially convey his condolences, that of the State Government and people of Kaduna State, to the Catholic Church and immediate family of the late Bishop,’’ she said.

The Deputy Governor recalled that Governor El-Rufai had earlier publicly extolled the qualities of the late Bishop, and shall continue to remember him as one deserving of respect and honor.

Most Popular Online Casino Brands And Impact In Nigeria’s Industry

Most Popular Online Casino Brands And Impact In Nigeria's Industry