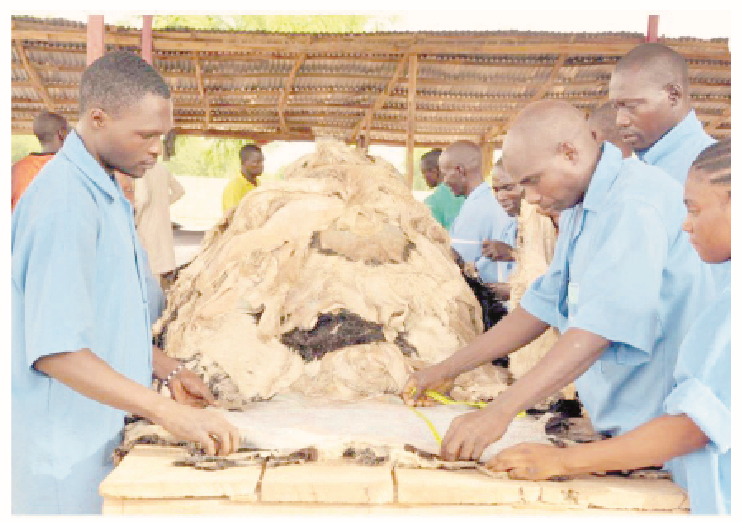 The ‘buy and sell’ orientation to which Nigerians are always justifiably associated is an acceptable explanation of the consumption status of the country.  Consumerism is, by a certain informed judgement, the concept or tendency that best defines the attitudes of most Nigerians to the issues about the procurement of necessary items for the satisfaction of needs in particular and commerce in general.

Yes, several Nigerians loudly broke records in the areas of innovations and inventions for which they gained regional, continental or even global recognition. There are still several others who are currently displaying exceptional expertise in  critical areas of specialization in various parts of the world which therefore abundantly indicates the huge capacity of the citizens for the acquisition and deployment of skills for the service of humanity.

But the historical failure of the successive governments to create and sustain the necessary conditions for skills development and utilization has turned majority of Nigerians into, at best, mere buyers and sellers of mainly foreign finished products. There seems to be a belief that it is an enough achievement for a person to be just a buyer and seller or even end-user of foreign products.

The consequence of this failure which continuously manifests in the obvious neglect of the vital components or sectors of the national economy is the major cause of the over-dependence of Nigeria on other countries. A lot of such sectors that should have been fully functional have, however, been rendered comatose as a result of which the entire national economy has become weak.

It is obviously in a bid to address the crippling challenges in particularly the leather industry that the ‘National Policy on Leather and Leather Products in Nigeria’ was introduced in 2018 by the federal government. The subsequent establishment of the National Steering Committee on Strategic Implementation Plan of Leather and Leather Products in Nigeria with the current Director General of the Nigerian Institute of Leather Science and Technology (NILEST) Zaria, Professor Muhammad Yakubu, as its pioneer Chairman has adequately testified to the resolve of the government to revitalize the sector.

The commitment was even further expressed by the former Minister of Science and Technology, Dr Ogbonnaya Onu, who stated in a foreword to the National Policy that the “need for an explicit policy that will address and also provide strategic direction for the leather sector in the country became imperative.” It is a commitment that, according to him, predicates on the realization of the fact that the “leather industry is the second major earner of foreign exchange after oil” which contributes “about 25 percent of the total agricultural GDP in Nigeria.”

Dr Onu’s submission was strongly re-enforced by NILEST Director General’s revelation that leather products worth 800 million dollars have been exported from Nigeria this year alone and even further projected that by the year 2025, such an export will be worth 20 billion dollars, which will account for 15-20 percent of the total volume of trade on leather in the entire world. His additional explanation that more than 20,000 pairs of shoes are, on weekly basis, exported from Nigeria to other African countries as well as some nations in Asia and Europe must have given a bigger picture of the contributions of the leather  industry to the national economy.

There appears to be a belief that the proper implementation of the policy on leather in which there are specific provisions that relate to some aspects of the national development plan is the only measure that will enable Nigeria to maximally benefit from the industry. As a policy that is both sector-specific and harmonized version of such past laws as Northern Nigeria Hides and Skins (Export Duty) Act of 1962, Hides and Skins Act of Federation of Nigeria of 2004, Agricultural Transformation Agenda of 2012 and the Nigerian Industrial Revolution Plan of 2012, the document contains well-defined plans for the speedy development of the leather industry in particular and the national economy in general.

NILEST as the only government owned leather institution in Nigeria and the first of its kind in Africa, having been established in 1964, is the provider of the necessary instruments for the translation of the policy into reality. The Institute’s Boss, Professor Yakubu, who doubles as the Chairman of the Strategic Plan Implementation Committee and therefore the face of the on-going revolution in the leather industry is fully aware of the challenges.

Yet, he continuously assures that the effective implementation of the policy will bring about faster industrial growth, economic diversification, job and wealth creation, reduction in capital flight as well as promotion of science, technology and innovation. All these are benefits that the country is now desperately trying to achieve and which will be the basis of its development.

By all standards, NILEST is well-positioned to lead the implementation of the policy, even with the fact that certain realities in the leather industry have continued to hinder progress. The high cost of doing business in Nigeria, exorbitant prices of processing materials and lack of subsidy have, for example, been constraining producers of leather works.

However, a lot of the methods that have, so far, been adopted by the implementation committee are clearly strategic enough to guarantee success. The introduction of ‘Business To Business Summit’ the last edition of which took place recently in Lagos and the creation of subcommittees with each assigned to cover specific part of the whole work are right steps in the right direction.

Such steps will definitely facilitate the execution of the mandate of the committee which, as stated  in the National Policy document, is the full alignment of the activities in the sector with the “ national development agenda of the present administration.” Also, they are most likely to lead to the realization of the vision and mission of the policy-makers which are the provision of a “policy framework that guides the Nigerian leather industry to a competitive position in the global economy” and the transformation of the “Nigerian leather industry into a dynamic and aggressive sector that embraces the use of cutting edge technology for value addition and marketing,” respectively

Leather and leather products have, for several decades, been Nigeria’s neglected wealth. It is, in fact, a wealth that has been a victim of a noticeable neglect which has put the national economy in a terrible crisis.

It is, perhaps, this effort which started four years ago with the introduction of the National Policy on Leather and Leather Products that will bring the sector out of the mess as consistently desired by the advocates of the diversification of the national economy. The earlier this is achieved, the better for the country.

Group To Discuss Strategies To Lead In Digital Age