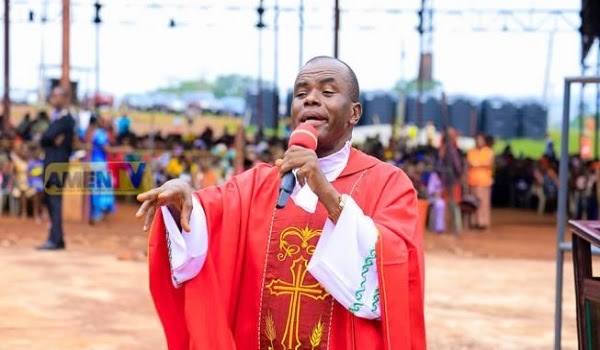 Followers of the fiery Enugu based Catholic priest, Rev. Fr. Ejike Mbaka, on Sunday, took to the streets in Enugu metropolis to protest the ban on the Adoration Ministry where the priest is the spiritual leader by the Bishop of the Enugu Diocese, Callistus Onaga,

The Bishop of Enugu Catholic Diocese, Most. Rev. Onaga, had on Saturday banned all priests and Catholic faithful from attending Mbaka’s Adoration Ministry.

The decision followed  the priest’s  outburst against a former governor of Anambra State and Labour Party presidential candidate, Peter Obi.

The priest  had on Wednesday at his Adoration Ground, declared that Obi would never be the president of Nigeria because he is a stingy man, adding that the politician is cursed.

The remarks generated widespread criticisms from varrious quarters but  the priest  apologized, saying his intention was not to malign Obi.

But in spite of the apology, Bishop Onaga prohibited Catholic faithful from attending Adoration Ministry programmes until the due canonical process initiated by the Diocese was concluded.

Angered by the ban, Mbaka’s  followers gathered on Sunday morning at the Adoration ground and started a massive protest against Bishop Onaga’s directive.

They chanted anti-Bishop Onaga songs, calling the Bishop unprintable names and queried his authority for clamping down on Mbaka’s Ministry.

“Our spiritual director has done nothing wrong. He is a man of God and talks as the spirit leads him. So, Bishop Onaga cannot just wake up and ban the ministry. They are trying to dictate to him what to say and what not to say,” one of the protesters said.

The angry protesters also attacked journalists and anyone who attempt to take pictures of the protest.

As of the time of filing this report, the protest was ongoing within the Adoration ground.

An BBC Igbo journalist who was covering the protest live was forcefully stopped by the protesters.