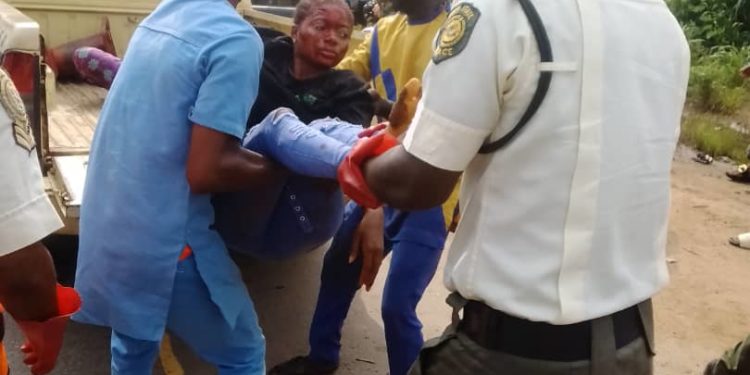 A medical doctor identified as Joko Oriyomi Shedrack and five other persons were confirmed dead in an auto crash which occurred Saturday afternoon along the Abeokuta-Sagamu expressway in Ogun State.

Four others, which included a male and three females sustained varying degrees of injuries in the accident which occurred at the U-turn axis of Day Waterman College, a private school, inbound Abeokuta in Obafemi-Owode local government area of the State around 4pm.

The fatal crash involved a Yellow-coloured Howo truck marked, T-14214LA, suspected to belong to a construction company in the state and a Silver-coloured Mazda passenger bus with registration number KRD 975 HJ.

LEADERSHIP gathered that the Mazda passenger bus, which was said to be on top speed on the expressway, ran under the truck, which was making a detour at the U-turn point, thereby resulting in the fatality of the crash.

The public relations officer (PRO) of the state-owned Traffic Compliance and Enforcement Agency (TRACE), Babatunde Akinbiyi, who confirmed the accident to journalists in Abeokuta, said the medical doctor was identified by the sympathisers around the scene of the accident, who confirmed that he just completed his course and freshly graduated from a medical school.

Attributing the cause of the crash to alleged reckless driving on the part of the truck’s driver, Akinbiyi explained that the truck driver “drove dangerously and recklessly” as he failed at observing due process of driving on the expressway by according right of way to the traffic coming from Abeokuta, while making a detour.

“Unfortunately, the driver of the Howo truck who caused the crash ran away. However, the accident vehicles have been deposited at the Obafemi Owode Divisional Police Station,” he added.

Akinbiyi further explained that the injured victims were rescued to the State Hospital in Ijaiye, Abeokuta as well as the Federal Medical Center (FMC) Abeokuta, while corpses of the deceased were also deposited at the same hospitals.

JUST-IN: Terrorists Kill Another Kaduna Catholic Priest On His Farm

JUST-IN: Terrorists Kill Another Kaduna Catholic Priest On His Farm