Muslim Conduct Before, During And After Elections 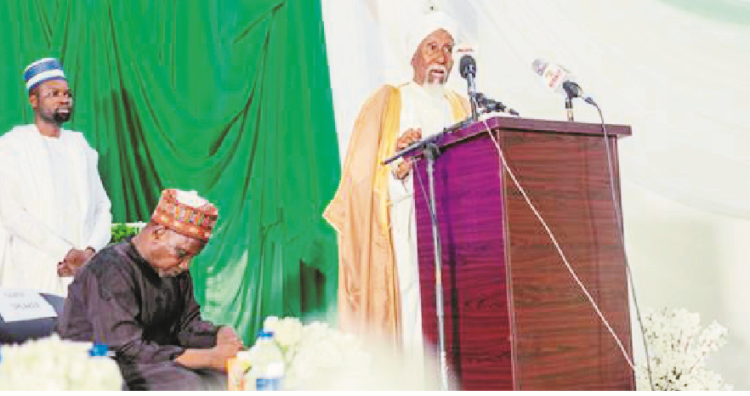 In the name of Allah, the Beneficent, the Merciful. Praise be to Almighty Allah, the Lord of all the worlds, the compassionate, the Merciful. The Master of the Day of Judgment. You alone do we worship and to you alone do we turn for help. Guide us on the right path. The path of those on whom you have bestowed your favours, not those who have incurred your wrath, not those who have gone astray.

May the blessing of Almighty Allah continue to be on the Prophet Muhammad (S.A.W), his household, his companions and all those that follow his teachings and guidance.

I would like first of all to welcome all the distinguished worshipers that are here to share with us the discussions we are going to have tonight in this blessed Mosque. We are starting new series of public lectures and talks in this Mosque and this is supposed to be the first of these series, and in In-Sha-Allah we will continue to have these public lectures at least once every month.

As most of you in the audience are aware, mosques have always been the citadel and centres of learning throughout the history of Islam. In fact, the Prophet’s Mosque in Al-Madinah which was set up by him 1440 years ago was not only a citadel of learning but a confluence where Muslims used to discuss all their political, social and economic matters; and the Prophet himself was the first teacher or the head instructor in this Islamic institution. He used to give instructions to the worshipers on all matters relating to their spiritual and worldly affairs. It was a training ground for building the Muslim Ummah and guiding it to live happily in accordance with the Shariah system and prepare it for the life in the hereafter. A number of companions of the Prophet graduated from this institution of learning and became highly learned in various branches of knowledge. The subsequent Ulama’ used to quote these highly authoritative scholars as their authority in many branches of learning. Until the present time, the Ulama’ are making good use of their vast knowledge.

The Prophet – no doubt – taught us how to use mosques not only as places of worships or centres of learning but also as a centre of socialization. With frequent repetition of five prayers daily, the mosque certainly becomes a centre of socialization. Worshipers become friends to one another, help one another and become eventually as brothers and sisters.

One of the important function of the mosque is that it provides a venue for the practical teaching of all aspects of Islamic virtues like unity and equality of the Ummah. All worshippers stand together in a row before their creator; all stand side by side – shoulder to shoulder, no difference between rich and poor, old and young, permanent secretary and messenger, chairman of a company and labourer. Thus the atmosphere of brotherhood, unity, equality and love is clearly and abundantly demonstrated as stated by Almighty Allah:”

“Surely your community is but one community and I am your Lord so worship Me” (Al-Abiyaa vs 92).

In a similar vein the Almighty Allah in the Surah of Al-Muminun says:

“This community of yours is one single community and I am your only Lord, therefore, fear Me alone (Al-Mu’minun vs 52)”

As there is no aspect of ‘Ibadah (worship) in Islam that could be practised and accepted by Allah without knowledge hence seeking knowledge is a fundamental requirement in Islam. In fact, the first word of the revelation that was revealed to our Prophet was ‘Iqra’ – read or recite.”

“Recite in the name of your Lord who has created. Created man out of germ-cell, Read, for your Lord is the most Bountiful One who taught by the pen. Taught man that which he knew not. ( Al-’Alaq vs 1-5)

This event, no doubt, has immense significance and it is not an exaggeration to describe it as the greatest in the history of human existence. One of the commentators of the Qur’an Sayyid Qutb comments that “This event signifies that God has bestowed on man an honour the greatness of which he can hardly ever appreciate and for which he can never show enough gratitude; not even if he spends all his life in devotion and prostration. (S.Q. Vol. xviii p.264)

The significance of this first revelation to us is that:

Reading is an important method of acquiring knowledge for man.

Allah, the Most High created pen as one of the most important means of learning.

And Allah taught man what he did not know.

It was the mosque that led to the creation of the first University in the world – Al-Azhar which was established by the Fatimid Dynasty in Egypt in 978 A.D (about 1041 years ago).

Having said all these to emphasise the significance of the mosque, I should now turn to the topic of my talk tonight. For several weeks I have been dealing with this topic in my Friday Khutbah in this Mosque namely – how we should conduct ourselves before, during and after the General Elections.

As the days for conducting General Elections draw near political leaders have already intensified their campaigns, each party trying to urge Nigerians to vote for them. It is most unfortunate that these campaigns sometimes bring with them a great deal of chaos including fighting that leads to loss of lives and properties, robbery and other crimes.

In this country and in a number of African countries, election days are always full of problems and chaos that usually lead to insecurity and instability. This is certainly against the Islamic code of life. Islam, as we are aware, is a religion of peace and it encompasses all aspects of human endeavours whether religious or worldly affairs. It teaches and guides Muslims how to conduct themselves, how to perform all their religious obligations and how to go about doing their business politically, economically and socially.

The idea of consultation was an early practice among the Muslim community and was applied by the Prophet and the Caliphs that came after him. It was an essential aspect of Islamic life and distinctive quality of the community entrusted with the role of leading mankind. Needless to say, it is a fundamental quality of sound leadership. We are told by Allah that we are:

“You are the best nation produced [as an example] for mankind. You enjoin what is right and forbid what is wrong and believe in Allah…” (Al-Imran vs 110)

In Surah As-Shura (consultation) Almighty Allah praises those that conduct their affairs by mutual consultation among others. He says:

“And those who shun grave sins and gross indecencies, and who, when angered will forgive. And those who responded to their Lord and regularly observe their prayers, conduct their affairs by mutual consultation and give generously out of what We have provided them.” (Ash-shura vs 37-38)

The point I wish to draw attention to here is ‘consultation’ which indicates that it is a characteristic quality of the Muslim Ummah in all situations. Our present situation now calls for election as the best procedure for providing a healthy system of consultation.

Now that in a few days time, this country is going to conduct election, it is very much hoped that Nigerians should conduct themselves in an atmosphere of peace and tranquility throughout these days so that there will be no violence, no killing and no any chaos.

It is pertinent to draw attention to the following points:

All campaigns these days and always should be free from political violence, attempted murder of political figures, kidnapping, rape, other crimes and disruption of campaign and rallies of opponents.

We must refrain from all fraudulent practices during the elections; these include:

One other important point that needs to be emphasized is the intensification of voter education by the Election Management Body – INEC, political parties and all the stakeholders. This is especially vital in rural areas and among the non-literate voting population. Some non-literal population may have difficulty identifying even the symbols of political parties and thereby become vulnerable to the manipulation of party agents.

In conclusion, it is pertinent to emphasise the importance of having a free and fair election devoid from violence of any kind. There should not be any attempt to murder or harm an opponent or indulge in any activity that may lead to fighting, plundering and looting. No one who has any trace of faith in his heart should attempt to murder any person, because doing that is a crime too horrendous to be committed. Allah says in the Qur’an:

“He who deliberately kills a believer his punishment is hell, therein to abide permanently. God will be angry with him, and will reject him and will prepare for him dreadful suffering.” (An-Nisa’ vs 93)

According to some commentators of the Qur’an, deliberate murder of a believer is a crime against the very idea of believing in God. For this reason, it is associated with denying faith altogether. Some scholars are of the opinion that no repentance of such a crime is acceptable. Others disagree.

In another place Allah says:

Finally, we pray that our elections will be conducted in an atmosphere of peace and tranquillity and should be free, fair and credible without any fraudulent manipulations. We as Nigerians must realize that genuine elections are essential foundation for sustainable development and functioning democracy. We should also remember the statement of Almighty Allah:

May the Almighty Allah help us to conduct all our affairs correctly, peacefully and justly, Ameen.