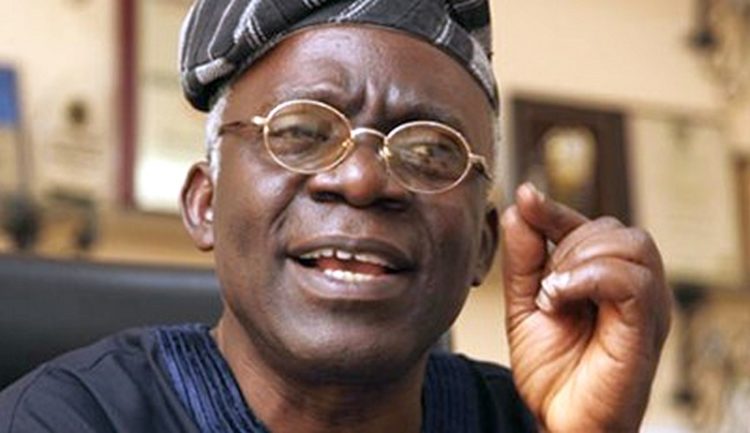 Renowned constitutional and human rights lawyer, Femi Falana (SAN), has again decried what he called “discriminatory, unfair and unjust” action of the President Muhammadu Buhari government for its continued delay in the inauguration of a substantive Board of the Niger Delta Development Commission (NDDC) since 2019.

Mr. Falana who spoke at an event organised by the Socio-Economic Rights and Accountability Projects (SERAP) over the weekend in Lagos, urged the people of Niger Delta region to demand the inauguration of the substantive Board for the interventionist agency.

Falana emphasised that, “There are two intervention agencies in Nigeria that are similar in terms of their responsibilities to the oppressed people of our country: the Niger Delta Development Commission (NDDC) and the North East Development Commission (NEDC), but regrettably the Federal Government has hidden under many excuses to deny the impoverished people of the region a broad and equitable representation in the administration of the huge funds which accrue monthly to the interventionist agency.”

According to Falana, “But what has happened since 2019? You are either told that we are investigating fraud in the NDDC, or ‘Oh, we have set up an audit committee to investigate allegations of fraud. That committee (forensic auditors) submitted its report since September 2021, but no white paper has been issued uptill now.”

Falana also noted that, “all the contracts awarded either by the sole administrator or interim management are illegal because sole administratorship is unknown to the NDDC Act. We are, therefore, calling on the government without any further delay to inaugurate the board of the NDDC.”

Falana had also recently warned that if the Federal Government does not comply with the law setting up the Niger Delta Development Commission (NDDC) and put in place a substantive Board for the Commission, there might be a breach of security in the oil-producing region.

He restated that the Buhari administration has “adduced some contradictory reasons to justify the illegal appointment of Interim Administrators to run the affairs of the Niger Delta Development Commission (NDDC) in utter contravention of the provisions of the Niger-Delta Development Commission (Establishment etc) Act, 2000, No. 6, Laws of the Federation of Nigeria. Whereas the enabling law provides for the constitution of a Board made up of the representatives of the oil-producing states in Nigeria, the President has been appointing Interim Administrators to manage the NDDC. The action of the Buhari administration is illegal, discriminatory and sectional.”

Falana further noted that whereas the Federal Government has not inaugurated the NDDC Board since the receipt of the forensic audit report, “the President has continued to appoint Interim Administrators to manage the NDDC without any legal justification. Such appointment or renewal of same constitutes a violent violation of the valid and subsisting order of the Bayelsa Judicial Division of the Federal High Court which has restrained President Buhari from further appointing Interim Administrators to manage the NDDC.”

He, therefore, urged the Federal Government to urgently douse the growing tension in the area by putting in place the substantive Board of the NDDC without any further delay.

Falana warned that if, however, the Federal Government “does not put an end to the impunity, it is undoubtedly clear that the appointment of the Interim Administrators and the actions taken by them including the award of contracts are liable to be set aside by the Federal High Court, sooner or later.” He therefore reiterated his call on the Federal Government to comply with the law and put in place a substantive Board for the Niger Delta Development Commission (NDDC) to avoid a “breach of security in the oil-producing region of Nigeria.”

Niger Delta authentic stakeholders have consistently demanded that President Muhammadu Buhari should comply with the law setting up NDDC and inaugurate the substantive board to manage the Commission for the benefit of the people of the nine Niger Delta States.

The President had made commitments to end the illegal Interim Management / sole administratorship at the NDDC and inaugurate the Board of the Commission upon receipt of the forensic audit, in compliance with the law, and which commitment he made to the nation on June 24, 2021 when he received the leadership of Ijaw National Congress (INC) in Aso Rock, Abuja.

Also, on July 28, 2022, while declaring open a retreat for management of the ministry of Niger Delta Affairs and NDDC at the state house banquet hall, Presidential villa, Aso Rock, Abuja, President Buhari restated his commitment to inaugurate the NDDC Board.

When he received the leadership of Ijaw National Congress (INC) in Aso Rock, Abuja, on June 24, 2021, President Buhari made a commitment to the nation. The President said: ‘‘Based on the mismanagement that had previously bedeviled the NDDC, a forensic audit was set up and the result is expected by the end of July, 2021. I want to assure you that as soon as the forensic audit report is submitted, the NDDC Board will be inaugurated.” The Forensic audit report has been submitted to President Muhammadu Buhari over one year ago, on September 2, 2021. Regrettably, the NDDC which is the foremost Niger Delta regional development agency and which was set up to right the wrongs in the Niger Delta is still being run by a sole administrator appointed in breach of the NDDC Act.

Despite further assurances that the submission of the report would see to the inauguration of the board, it has not ended the delays, manipulations and hijacking of the NDDC by vested interests.

Niger Deltans are also accusing the Buhari Administration of discrimination and double standards. They point out that whereas the North East Development Commission (NEDC) has been allowed to function with its duly inaugurated Board in place (since May 2019) in line with its NEDC Act thereby guaranteeing proper corporate governance, accountability, checks and balances and fair representation of its constituent states, the NDDC on the other hand has been run arbitrarily in the last three years by Interim committees/sole administrator in breach of the NDDC Act. To the detriment of the entire Niger Delta region, these illegal interim contraptions have been used to fleece the NDDC of its funds in the last three years.

There are persistent calls on President Buhari to kindly heed the call of Niger Delta leaders, governors, youths, women, traditional rulers, civil society organisations, and other stakeholders, comply with the law setting up NDDC, and also fulfill his own promise of June 24, 2021, and inaugurate the board of the Commission to ensure accountability, checks and balances, probity and equitable representation of the nine constituent states.