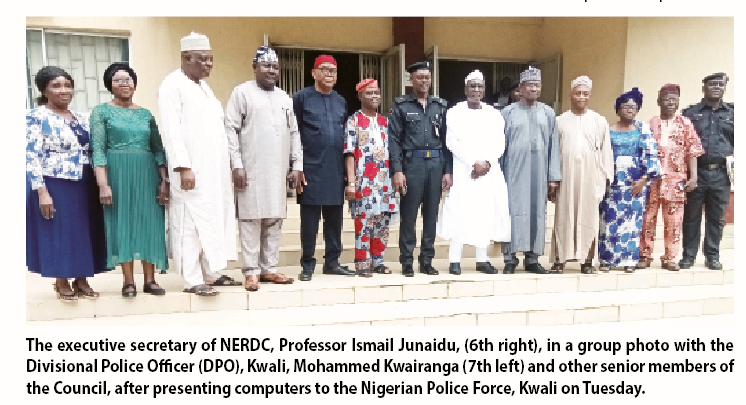 The executive secretary of NERDC, Professor Ismail Junaidu, presented the items to the Divisional Police Officer (DPO), Kwali, Mohammed Kwairanga during a brief event in his office at Sheda on Tuesday.

Junaidu said the idea is to assist the police to carry out their functions effectively so as to overcome the insecurity facing the region.

He commended the police for the continuous efforts in the protection of lives and property, while soliciting for more support, especially against the herdsmen rearing cattle on its land.

The executive secretary noted that the Council previously had cases of herdsmen penetrating into its territory despite attempts to stop them.

He said, “Security is everybody’s business, we believe in that and we know also, as part of our responsibility to assist the police and any security outfit.

“What we have done is just to present to them a desktop and then a printer so as to facilitate their day to day running of their offices.

“And more will be coming you know, to assist in whatever we can. As I said, security is not only the police but for everybody and we as an institution, also, within the Area Council, we feel we have a responsibility in assisting in whatever form to get the security at least, you know, to a manageable situation.

“So the whole purpose of the meeting is to actually have interaction with the police and to assure them of our cooperation, and also for them to give us the assistance in whatever form Yes,” he said.

Speaking on the recent attack in Sheda, which resulted to the closure of Federal Government College, Kwali, the NERDC boss said the attack was not actually on the school, but a neighbouring community.

“People have this wrong impression but we that are closer, we know the attack is not on the school, but rather a neighboring community but of course, it’s a serious concern to everybody. As we said, security is everybody’s business.”

Responding after receiving the items, Kwairanga commended NERDC for the kind gesture, saying that the Police Division has been battling with the existing computers in carrying out office functions.

Kwairanga who assumed office only four months ago said he will ensure criminal activities are eradicated within the community, while assuring NERDC to put a stop on the issue of herdsmen parading the Council land, among other issues.

He said the problems facing Kwali, unlike any other community can be curbed with intelligence gathering and support from the people, noting that support like NERDC will go a long way in ensuring effective service delivery in the Police Force.

“The community themselves can testify, we may have problem of insecurity, there is no place that is problem free, but sincerely speaking for now, Kwali is calm.

“We have a lot of intelligence gathering from all the angles, which immediately when we receive them, we response whether in the night, in the day, because most of my policemen don’t have to go to the house, especially me. I cannot go to the house and leave the place because I feel I am the one that is in charge.

“And anybody that is thinking that Kwali is not free. I believe he can come and see for himself. The only thing I want to emphasis is that we need intelligence.

“We need intelligence gathering from each and everywhere. I pasted my telephone number in my police station for people to copy so that they can call me and I know those that called me during distress I know I attended and they can testify to that,” he said.