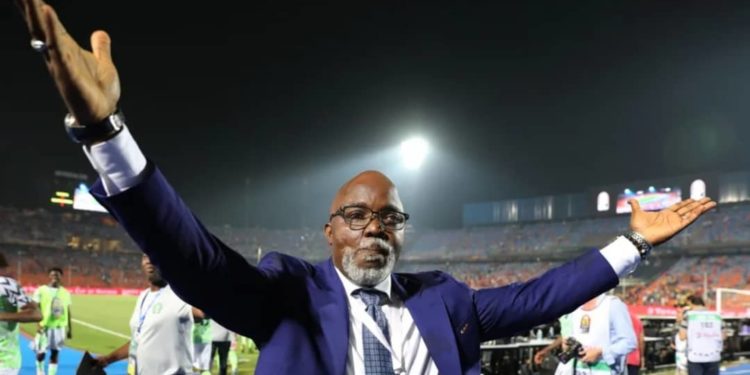 The outgoing president of the Nigeria Football Federation (NFF), Amaju Melvin Pinnick, has finally laid to rest his ambition to seek a third term in office, insisting that he would not go back on his earlier decision not to contest for the position of the Federation President again.

The FIFA Council member stated this on Monday during an interview on Arise TV, saying he would rather work with whoever emerges as president after him.

“Third term, no, no. Am fine and am telling you that as there are so many Nigerians that are capable of running Nigerian football.

“I will assist and work with whoever emerges as the new Nigeria Football Federation (NFF) President and that’s my promise. I’ll intervene but never interfere,” Mr Pinnick replied when asked whether he would seek to continue his ‘good works’ in office.
The former Delta State Sports Commission boss, who is winding down his second term in office, was reportedly seeking a third term in office ahead of the NFF elections in September.
Last week, several reports quoted Pinnick saying he had received several calls from “very influential Nigerians” to seek re-election, but all that have been put to rest following his declaration on Monday that he will not contest for a third term as NFF president.
Pinnick is the first Nigerian to serve two terms as NFF President.
Meanwhile, first vice president of the NFF, Seyi Akinwunmi, has declared that he is statutorily bound to support the calls for the staging of the federation’s election on or before September 20 in complete adherence to the NFF Statutes.
There were strong insinuations that the current board of the NFF was plotting to elongate its tenure beyond the September termination date, a development that has heated up the football space in the country.
However, speaking via a short footage on Monday, Akinwunmi declared his support for the staging of the polls in September, saying that the Executive Committee must uphold the supremacy of the NFF Congress with the majority of the highest decision-making organ of the football fraternity demanding for an election to be held within the life span of the current board.
“As you are all aware, there has been a dark cloud of uncertainties surrounding the administration of our football in the past few months….I wish to make it abundantly clear that I support the total adherence to the NFF Statutes, the supremacy of the congress and the commitment that NFF elections be held on or before 20 September 2022. As a football family, this is yet another time when we are called upon to come together and put football first,” Akinwunmi said.
The Lagos State FA chairman Akinwunmi who is reputed for his grassroots football development efforts added that the process that would lead to the staging of the polls will begin with the Annual General Assembly slated to hold on Thursday, August 18, 2022, in Lagos.
“By virtue of NFF Statues, the Annual General Assembly as currently constituted is the supreme legislative body for the NFF. Indeed, the Executive Committee holds the office at the behest of Congress.
“The Congress has been informed by the NFF General Secretary that after the botched AGA earlier fixed for August 16, 2022 in Yenagoa, Bayelsa State, a fresh one has now been slated for August 18, 2022 in Lagos. As the chairman of Lagos State Football Association FA, I look forward to receiving you at the Center of Excellence.”