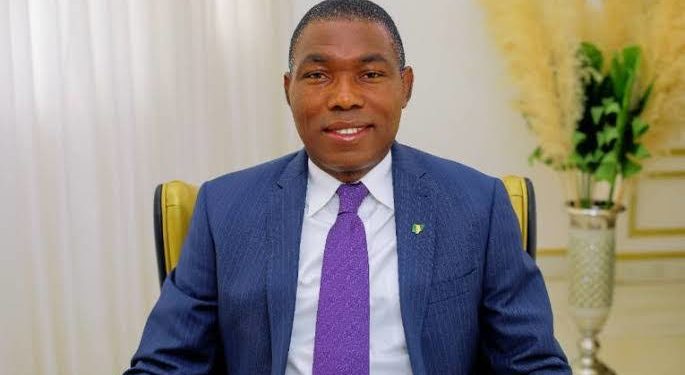 Presidential candidate of the Social Democratic Party (SDP) in the 2023 presidential election, Prince Adewole Adebayo, has said Nigerians needed to vote out corrupt politicians from office in order to address the country’s stunted growth and stop impediments preventing her attaining full potential.

Adebayo added that until such persons were sacked from office, Nigeria’s greatness cannot be achieved, a statement from his media team stated.

“If you want to kick out poverty and Insecurity, you will need to kick out corruption, and the only way you can kick corruption is to kick the corrupt people out of office,” he said.

Adebayo was a guest of the Voice of America (VOA) in the United States where he had gone on the invitation of the USA Commission for International Religious Freedom.

Nigeria as a people, he said, aren’t bad, the government is.

“’When you change the administration,  you just recycle the same people. They will not change their behaviour. And the only way to ensure things are different is to vote the corrupt people out of office. That’s what we are going to do in 2023.”

When asked if he was ever part of the government he is canvassing to vote out now, Adebayo said his records are open to the public to know, adding that he is part of the young and fresh Nigerians who are fed up with the status-quo and want the narrative changed.

“Many of the people succeeding them today have always been part of the system. We are completely different and we are from the people. Nigerians know that.

“We know that Nigeria’s problems are man made problems. Ordinarily, as it was designed by nature, Nigeria was not supposed to have problems because every resource you need to develop yourself is there, human capital is also there.

“Everything you need to succeed is readily available, with all these opportunities, it is unfortunate that the only malice facing the country is bad governance. People know, that is why we are running for office.

“There is nothing wrong with the system from the point of view of those who are in the system. It is only people like me outside the system that know something is wrong.

‘The whole world can see something is wrong with the country, but they can’t see that, what they see is the politics of doubling your money.

“Now the young people, outsiders and third force are coming together to push a new narrative so as to push an ordinary person into government so that we can then work within to throw out the system,  if you don’t, give it a 1000 years, nothing is going to change,” he declared.

Meanwhile, Adebayo, who is on tour of Washington DC has met with a team of policy advisors and diplomats with keen interest in Nigeria, led by former Assistant Secretary of State for Democracy, Professor Robert Destro and they deliberated on key common issues of concern between the United States and Nigeria namely security situation in Nigeria as it affects Nigerians in general and aspects impacting on  religious freedom in general, poverty and economic problems, access to US policy makers and understanding of making processes within the United States Government, and international and regional alliances  Nigeria needs to overcome her present key challenges.

Adebayo emphasised that his administration would overcome most of Nigeria’s protracted security, economic religious freedoms and diplomatic problems with keenness of focus, fair mindedness and robust engagement with the United States.

The SDP presidential candidate emphasised that his administration would overcome most of Nigeria’s protracted security, economic religious freedoms and diplomatic problems with keenness of focus, fair mindedness and robust engagement with the United States.