by Kingsley Alu
in Business, News
0 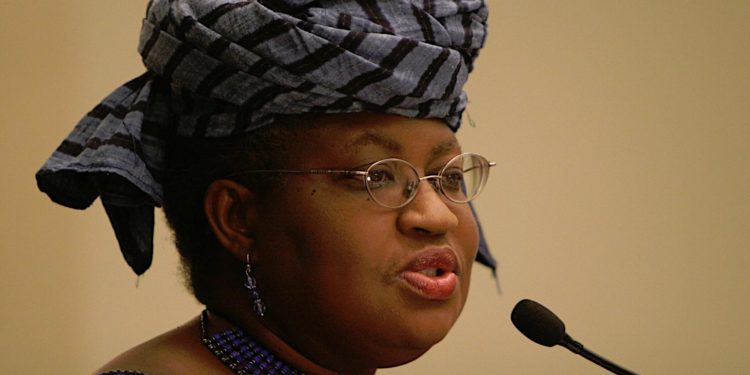 The director-general of the World Trade Organisation (WTO), Dr Ngozi Okonjo-Iweala, yesterday urged Nigeria to step up efforts to leverage on the new WTO Agreements on Fisheries Subsidies and IP waiver on local vaccine production.

Okonjo-Iweala said the revised agreement for new global rules is now tailored to curb harmful fishing subsidies and curtail post-harvest losses and a country like Nigeria and other African countries will greatly benefit from it.

The WTO DG, who was received by the minister of state for industry, trade and investment, Amb Maryam Katagum, at the ministry’s headquarters in Abuja, said she was cautiously optimistic that agreements on issues such as a limited IP waiver for COVID vaccines as well as a decision to curb harmful fisheries subsidies that allow big industrial rigs to plunder the oceans – depleting global fish stocks and harming food security for billions of people, would be fully implemented by member states including Nigeria.
Dr Okonjo-Iweala also canvassed support from local manufacturers to guard against imports of vaccines and other pharmaceutical products.
She encouraged the country to strengthen trade ties with other African neighbours with a focus on fisheries subsidies and local vaccine production and maximizing the benefits of the African Continental Free Trade Agreement (AfCFTA).
On her part, Amb Maryam Katagum, said the Agreement holds great benefit for Nigeria as it will enhance food security and increase source of livelihood particularly, for lower income families in rural and coastal areas, more so, as it protects global fish stocks in a manner that also recognises the needs of fishers in developing and least-developed countries (LDCs).
To this end, Katagum assured that her
ministry will escalate the agreement reached at the council of ministers meeting with President Muhammadu Buhari.
According to Katagum, the agreements reached include the establishment of fisheries subsidies which is expected to check unregulated fishing practices in Nigerian waters, the establishment of technical services in fisheries data collection and the development of fisheries development programs.
She also added that “We will also be playing a constructive role in the negotiations on Fisheries Subsidies especially with regards to the outstanding issues of forms of fisheries subsidies that contribute to overcapacity and overfishing. This is to ensure that we adopt a comprehensive discipline on Fisheries Subsidies before the four years envisaged in the decision.”

7 Incredible Health Benefits Of Strawberries And Why You Should Eat More... Click Here For Details
Tags: Okonjo-Iweala
SendShareTweetShare
Previous Post