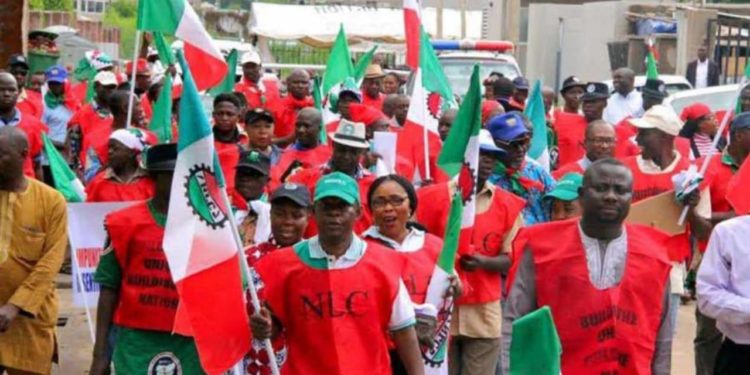 The leadership of Nigeria Labour Congress (NLC) yesterday asked all Nigerian governors and public office holders including politicians who are above 50 years to step aside as a mark of example, following their recommendation of early retirement of civil servants from age 50 and above.

This is coming as the governors prescribed early retirement of civil servants from age 50 and above as remedy to reposition the nation’s battered economy.

The governors also recommended the elimination of PMS subsidy/under-recovery estimated at N6-7 trillion, the implementation of the reviewed Oronsaye Report, putting an end to financing government’s budgetary expenditures, converting its N19 trillion debt into a 100-year bond and putting a final stop to PMS subsidy, eliminating NNPC’s federation-funded projects.

Other proposal brought forward to the president by the governors are; capping Social Investment Programme (SIP) and National Poverty Reduction with Growth Strategy budgets at N200 billion, eliminating extra-constitutional deductions from FAAC, reducing National Assembly constituency projects among other recommendations.

In a latter to President Muhammadu Buhari in Abuja, NLC national president, Comrade Ayuba Wabba said the congress is dismayed by the prescriptions of the governors as he described the move as smack of extreme selfishness and insensate cruelty.

Comrade Wabba said the best way to ensure better economy is for government to be decisive in curbing and punishing corruption, wastage, mismanagement, and maladministration in the petroleum sector.

He said the governors canvassed for the premature termination of the appointments of public servants from age 50 and above remain a clear violation of their contracts of employment which is a subsisting law.
“We find this repugnant, shameful and utterly irresponsible, aside from running contrary to your mission and principle of creating 100 million jobs (aside from poverty intervention schemes), this policy is clear invitation to anarchy and damnation. Those promoting this idea should be treated as enemies of your government.
The implementation of this proposal will lead to the sacking of almost a quarter of the public sector workforce, the decapitation of that workforce through the retrenchment of its most experienced layer, and the intensification of poverty and misery among citizens”, Wabba said.
He added, “Your Excellency, when one of the states (contiguous to FCT) against wise counsel sowed this policy (though it keeps denying it), it reaped whirlwind. Today, the state is in the hands of bandits. Truth is that mindless policies generate gigawatts of their own violence.
If there is little or nothing to show for the principal sums or revenues collected over the years, what assurance do we have that the additional sum on top of the principal popularly called subsidy (most of which is shrouded in mystery and crime anyway) can be put to effective use. Coupled with this, we find it distasteful that petrol subsidies in Nigeria create distortions in the economy but they do the opposite in US or Western Europe”.
“Truth is that removal of the little benefit the average person in Nigeria enjoys could lead to unintended consequences which we would be better off without.
The solution to subsidy and the ballooning deficits lies in domestic refining, effective management of our refineries, and creating an enabling environment for effective and efficient public sector leadership in the building and management of local refineries”, he said.