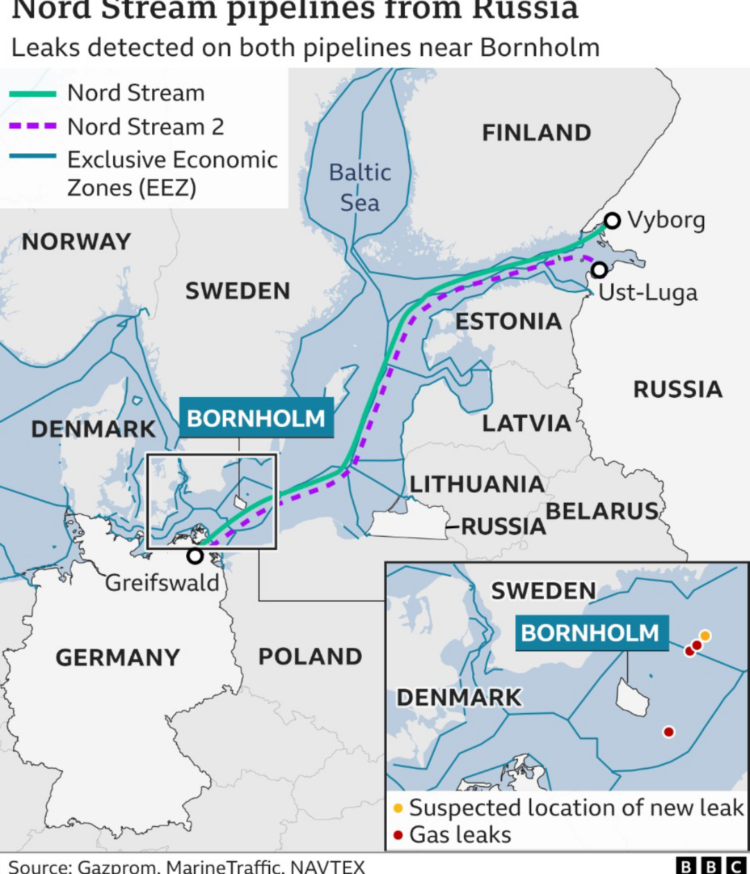 Despite calling the emergency at Nord Stream “an unprecedented act of international terrorism”, a public affairs analyst, Emesakoru Enifome, has accused President of Russia, Vladimir Putin, of deliberate and directly organising the explosions of the Nord Stream 1 and 2 gas pipelines.

According to him, President Putin will one day be brought to justice.

On September 26, 2022, a series of explosions occurred on the Nord Stream 1 and Nord Stream 2 gas pipelines, followed by a gas leak.

On September 27, 2022, European gas prices jumped 12 per cent after news spread about the damaged pipeline.

Both pipelines were built for the purposes of transporting natural gas from Russia to Germany through the Baltic Sea, and are majority owned by Russian state-owned gas company Gazprom.

He said the explosions occurred one day after Poland and Norway opened the alternative Baltic Pipe running through Denmark, bringing in gas from the North Sea rather than from Russia as the Nord Stream pipelines do.

Unless rapidly repaired, German authorities stated that the three damaged lines (both lines in Nord Stream 1 and line A in Nord Stream 2) are unlikely to ever become operational again due to corrosion caused by sea water.

It was reported that European security officials observed Russian Navy support ships nearby where the leaks later occurred on September 26 and 27. One week prior, Russian submarines were also observed nearby. Finland’s national public broadcasting company Yle, compared the incident to the two explosions in 2006 caused by remote-controlled military-grade charges.

He said, “The explosions halted Russian gas supply to Georgia after the country had started seeking NATO membership.

“The EU has repeatedly accused Russia of using gas supplies as a weapon against the West, in retaliation for its support for Ukraine.

“In the face of increased international economic sanctions against Russia, caused by the ongoing full-scale military aggression against Ukraine, and yet another failures of the Russian army in the war against Ukraine, Kremlin is trying to make new provocation.

“Despite the fact that on 29 September, President of Russia Vladimir Putin called the emergency at Nord Stream “an unprecedented act of international terrorism”, it is absolutely clear that it was Moscow that directly organized the explosions of the Nord Stream 1 and 2 gas pipelines.”