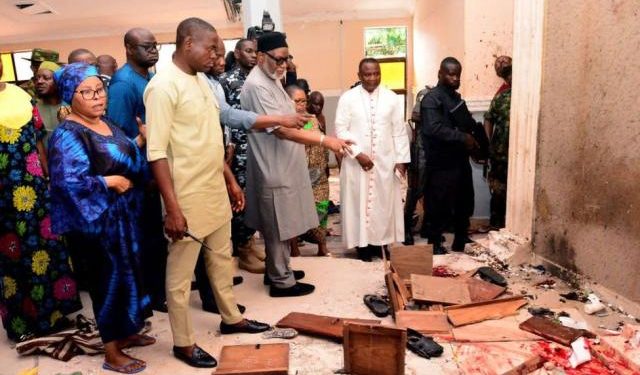 The organisation, an apex umbrella body for Muslims in the country, described the attack, where many innocent worshipers were gruesomely murdered and several others injured as not just only a crime against humanity but also a grievous and inexplicable sin.

The Islamic body headed by Sultan of Sokoto, His Eminence Muhammad Sa’ad Abubakar III, in a statement issued on Monday and signed by NSCIA’s Director of Administration, Arc. Zubairu Haruna Usman-Ugwu, enjoined all peoples of Faith to see the attack as a direct attack on all law-abiding citizens and should, therefore, be in the vanguard to halt the evil that appears to be assailing the life, property and integrity of humanity, particularly believers in God.

It called on the government at all levels to issue and pursue an ultimatum for the security agencies to unravel the identity and bring to book the perpetrators of the violation of sanctity of not only life but also religions.

The organisation also urged the security agents, who are saddle with the responsibility of  combat criminality and insecurity to heed the Qur’anic call that: “For had it not been that God checks one set of people by means of another; monasteries, churches, synagogues, and mosques, wherein the name of God is persistently mentioned would surely have been pulled down. Verily, God will help those who help His (Cause). Truly, God is All-Strong, All-Mighty. (Q 22: 40).

“It is therefore mandatory for security agencies to help in rescuing the helpless citizens that we have all become.

“The Council stands in absolute solidarity with the Christian Association of Nigeria (CAN), the Catholic community, the government and people of Ondo State and commiserates with the families of the victims in this period of immeasurable agony and distress.

“May Allah grant us peace and security in our nation. Amin,” the statement stated

7 Incredible Health Benefits Of Strawberries And Why You Should Eat More... Click Here For Details
Tags: NSCIA
SendShareTweetShare
Previous Post