Emerging security threats seem to be overstretching the federal security agencies as they battle criminal elements in all parts of the country. To complement them, the Governor Muhammadu Inuwa Yahaya administration in Gombe State initiated various internal security policies. NAJIB SANI writes on a special security taskforce code-named ‘Operation Hattara’ launched in the state 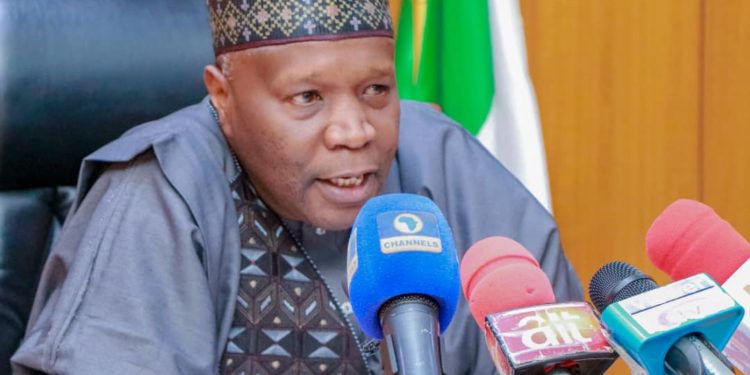 Insecurity has continued to escalate to almost every part of the country with the federal and state governments striving to address them to keep the nation peaceful and governable.

In Gombe state for example, there is the problem of cattle rustling and banditry in places around Billiri local government plus political thuggery notoriously called ‘Kalare’ in the state capital.

Recently, the state police command arrested 18 suspected cattle rustlers and recovered 483 cows in Billiri local government area. This is just as it apprehended 23 night thugs in Gombe metropolis all within last month. The ‘Kalere’ thugs often terrorise innocent citizens day and night in parts of the state capital.

Recall that during the last Eid-el Fitr celebration, the thugs clashed which resulted to the loss of at least three lives at Jeka da Fari area of the metropolis when people trooped out to watch horse riding otherwise called durbar performed by the emir of Gombe.

To support the efforts of the police in deterring criminals like bandits and other social miscreants from committing atrocities in the state, Governor Inuwa Yahaya last Tuesday set up a special security taskforce code named ‘Operation Hattara’ which means ‘be careful’ in English. The task force was aimed at reinvigorating internal security in Gombe state through crimes prevention.

The Inspector General of Police, Usman Baba Alkali was invited to unveil the special security task force. The taskforce was provided with 28 operational vehicles by the state government.

The team which will be conducting patrols to prevent crimes and deter criminal elements from operating in the state was unveiled by the IGP during the opening ceremony of the Gombe State Security and Peace Summit convened by the state government held at Government House, Gombe.

Speaking at the ceremony, Governor Inuwa Yahaya explained that the taskforce was launched with the purpose of reinforcing security architecture in and around the state.

According to him, the taskforce and the security summit were part of the state government’s strategies of enhancing internal security.

The governor noted that when he came on board, he established the first Ministry of Internal Security and Ethical Orientation in the state with a view to providing an institutional framework at the state level to support federal government security agencies.

Inuwa stressed that the decision to establish the ministry is yielding great results as evidenced by the decreasing rate of violent crimes and conflicts in the state adding that the idea to set up the new taskforce was to consolidate on the gains.

“The Gombe State Security and Peace Summit was convened by this administration under my leadership to provide an opportunity for carefully selected experts, security personnel, government officials and other strategic stakeholders and community leaders to aggregate and explore pressing internal security issues with a view to identifying new security and community pathways of mitigating them for lasting peace and stability.

“We are all aware that our dear country is passing through a delicate period of immense security and economic challenges and risks. Criminal elements all over the country are united in their determination to threaten our common values, destroy our means of livelihood and make life miserable for our people.

“Since 2010, our gallant security forces have been battling to contain a brutal insurgency waged by the Boko Haram terrorists in Borno which rapidly spread to other states in the North-East, North-Central and North-West subregions.

“Although the collective efforts of our men and women in uniform has succeeded in stopping the bombing campaigns of the Boko Haram insurgents, the colossal human and economic damage caused to our communities is still with us,” he lamented.

Inuwa pointed out that while the country was struggling to arrest the menace of Boko Haram in the North-East, another security threat, rural banditry, emerged in some parts of North-Central and North-Western Nigeria.

The governor noted that armed banditry began as a simple competition for scarce land resources between itinerant pastoralists and farmers but later metamorphosed into a serious armed conflict and criminality with huge human and economic costs.

He opined that the problem was fuelled by climate change, population growth, proliferation of small arms and light weapons, ethnicity and other factors.

Apart from banditry and insurgency, Inuwa said other security threats such as agitations by armed separatists and militancy in the South-East and South-South are significant security issues of great concern.

He therefore advised leaders at all levels to support the security agencies in the fight against insecurity and states to revitalise their internal security with a view to reducing criminality to the barest and making the work easier for security operatives.

In his remark, IGP Alkali hailed the governor for setting up the taskforce and providing vehicles for the security agents that will carry out operations.

He also said the security summit came at a critical time when the country was experiencing a myriad of security challenges. According to the IGP, the police is embracing community policing and collaborative actions to address the worsening insecurity in the nation.

He noted that crime is dynamic and requires innovative approaches and initiatives like the ones introduced in Gombe state to tackle them. This is just as he assured that intelligence-based approach would be adopted by the police under his leadership in reduction and prevention of crimes.

“The Gombe State Security and Peace summit is coming at a crucial time when the Nigeria Police Force under my leadership is working towards deepening the engagement of the concept of community partnership, technology-driven policing, and intelligence-based model in mitigating the current internal security challenges in the country.

“This policing strategy seeks to address security challenges through an active citizens engagement in the identification, analysis, and mitigation of threats and to actualise it, the communities and strategic stakeholders have critical roles to play.

“Community engagements, like the Security and Peace Summit by the Gombe State Government falls perfectly within the framework of this policing vision. To this end, the Nigeria Police Force conveys its full and wholehearted support to the Government of Gombe State, under the leadership of Governor Muhammadu Inuwa Yahaya for the vision in convening this strategic summit,” the IGP stated.