by Yusuf Babalola
in Cover Stories
0 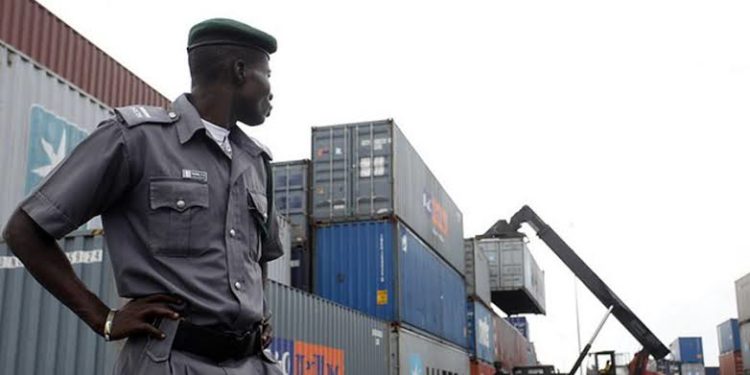 Maritime operators at the nation’s seaports have expressed outrage over the concessioning of the operations department of the Nigeria Customs Service (NCS) to Chinese Firm, Huawei Technologies Limited, for 20 years.

The stakeholders queried why the Customs Service would hand over its operations to a company that recently had security issues with the government of the United States of America and Canada.

They argued that the technology firm may compromise the nation’s security, saying no one would stop them from doing that because they already have access to Nigeria’s trade database while working on the e-Customs Project, which they can make available to third party partners.
According to the service, the project will generate $8.8billion (about N5.2trillion) annually as against the current N2.52trillion annual revenue of NCS with the threshold of N210billion generated monthly. This represents over 100 per cent increase in the current Customs revenue figures.

But experts further argued that the figures put forward by the service are unsustainable in a bleeding economy that is import dependent.
According to them, they are worried that the project is skewed against promoting export, thereby presupposing that importers are targeted to pay more in duties and levies, a development that will trigger inflation with the consequence of a rise in prices of goods and services in the local market.
Speaking to LEADERSHIP, a former president, National Association of Government Approved Freight Forwarders (NAGAFF), Eugene Nweke, questioned how the Chinese firm emerged to carry out the e-modernisation project, asking whether there was a bidding process.

According to him, the contract was possible because the Customs Comptroller General, Col. Hameed Ali (rtd), was not a career Customs officer.
He said, “The agency’s function so concessioned is not a one-man enterprise, but a public agency, as such Nigerians have a right to know how they did it and when was the bidding process advertised. Who are the bidders and what criteria was used to arrive at the choice of the Chinese firms? The lawmakers should answer and explain to Nigerians.”

According to him, there is need to set up a commission of inquiry to review the NCS modernisation process and related contracts from 2001 to date since the CG Ali and ICRC director general claimed in their separate speeches that the project was a novel idea that would facilitate ease of doing business and enthrone digital smart processes and procedures in Customs, thereby inferring that all the previous automation contracts and processes never existed or were not executed.

“I never believed that; all along the NCS has been wasting the taxpayers’ funds, going front and back and dwelling strongly on analogue import and export trade tools applications. By their submission, there is urgent need to ascertain the veracity of the automation processes in the NCS as written and published by DC Musa Omale in his book, “Nigeria Customs Service : An Overview”(Customs Monthly Order October Edition, 2012, page 27) under the title: Development Of e-Customs Through ASYCUDA.”
According to him, the service under this period developed the following electronic applications: e-manifest, e-payment, e-remittance, e-notifications, e-Government platform for single window to stakeholders in the international trade, e-release, e-provision of NCS national private telecom network.
Also speaking, a frontline member, Association of Nigeria Licensed Customs Agents (ANLCA), Chidi Opara, said relying on Huawei’s integrity in having access to Nigeria’s trade database while working on the e-Customs project presently is of little comfort.

Also speaking, the president of the National Council of Managing Directors of Licensed Customs Agents (NCMDLCA), Mr. Lucky Amiwero, said it is absurd to concession a whole professional department of Customs to an unknown company that had not been in the system.
“This country is sinking money into irrelevant things. You concession a whole department of Customs to a Chinese firm; I don’t know the company. Are they experts in Customs and how do they want to improve the revenue? Are they the ones that will bring the import or that they will come and impose value or what? Let’s watch and see.
“This regime just has a life span of six months and they are signing a 20-year project. I want to see them operate; that is when I will talk. We are mortgaging the future of a professional department. Nigeria Customs is not police, or Immigration. Nigeria Customs is not the Navy and you cannot compare them with the Army. It is a world trained organisation with procedures and experts. They have more than 100 conventions and those conventions have to do with procedures,” Amiwero, who was a member of the presidential reforms committee on Customs, said.

Speaking to LEADERSHIP, the national public relations officer of the service, Timi Bomodi, said the service only concessioned its IT infrastructure to Huawei Technologies Limited for modernisation.
Bomodi, a deputy controller of Customs, said Huawei will make the processes and procedures of the service more accessible, simplified, interactive, efficient and easier for stakeholders to access.

He said, “What the service signed was an agreement which was also midwifed by the federal government and it has to do with concessioning its IT infrastructure, modernisation. We have been advocating for e-customs since 2019 and that means we want all our procedures and processes to be automated. To automate all our procedures we have to bring in an internationally recognised company that has the capacity and capability to bring in both the hardware and software to integrate the processes and procedures and a company, modernisation Nigeria Limited, brought in a technical partner Huawei, a leading technology in the world.
“Hawei will come and ask for our processes and provide solutions, that is automation of those. They will make our processes and procedures more accessible and simplified, interactive and efficient and easier for stakeholders to access. They are providing us with facilities to make our work easier,” Bomodi said in an exclusive chat with LEADERSHIP.