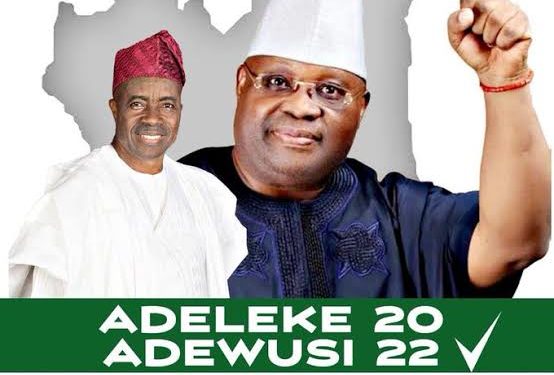 A political support group, PDP New Generation, has congratulated the Osun State governor-elect, Senator Ademola Adeleke, and his deputy, Prince Kola Adewusi, on their victory at the State’s governorship election on Saturday.

The group’s director-general, Audu Mahmood, in an address on Monday, also commended its 130-member Youth and Women Campaign Council for the Osun State governorship election, for its efforts during the campaigns.

“We congratulate the Governor-Elect of Osun State, Sen. Ademola Nurudeen Adeleke and his deputy, Prince Kola Adewusi. We also congratulate our great party for their support towards the victory in Osun State. Truly, power belongs to the people,” Mahmood said.

The PDP New Generation DG added that the group will be preoccupied with the 2023 presidential election in order to achieve victory for the Peoples Democratic Party (PDP) candidate, Atiku Abubakar.

He pointed out that its existing National Strategic Committee (NSC) would be expanded into a 300-member Youth and Women Presidential Campaign Council, to prosecute the 2023 campaigns.

“The next big thing on our agenda is the forthcoming general election. The PDP New Generation has constituted a National Strategic Committee to steer a campaign project, which is scheduled to be officially launched in few weeks.

“As we look forward to working with many of you in our next project, please accept as always, our assurances and considerations. .

“By the power vested on me, I hereby dissolve the Youth and Women Osun Guber Campaign Council,” Mahmood said.

Recall that on June 11, 2022, the board and management of PDP New Generation constituted the 130-man Youth and Women Guber Campaign Council for Osun State Election.

The Council was charged with a mandate to support and contribute to the victory of the gubernatorial candidate, Senator Ademola Adeleke, and his running mate, Prince Kola Adewusi.

On Sunday, June 19, 2022, the Youth and Women Council launched its campaign with the theme, “Osun For Adeleke” to wrest power from the All Progressives Congress (APC).

Mahmood said the #OsunForAdeleke campaign was used for ward to ward and street to street campaign tours.

“The campaign council also participated in all the 30 PDP LG campaign rallies in Osun including the grand finale that took place on July 14 in Osogbo, Osun State.

“The #OsunForAdeleke campaign was also deployed as the official hashtag on all social media platforms. We produced over 500 personalized fliers for youths and women of Osun State, which was used to dominate the social media space.

“The board and management of our great organization officially commend the leadership of the campaign council, led by the Chair – Dare Akinniyi, Co-chair – Adesina Adeleke (Sina Rambo) and Co-chair MHR, Hon Bamidele Salam.

“We thank and salute all the 130 members of the Youth and Women Guber Council for Osun State, for their doggedness, hard work and Commitment. There is no doubt that each and everyone of you, contributed and played a major role in the victory of Adeleke/Adewusi,” he added.