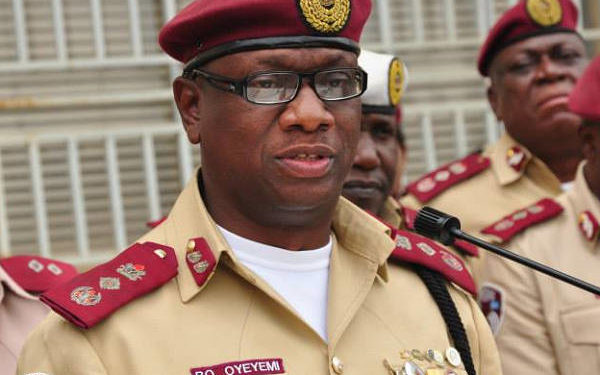 As part of the activities to mark the retirement as the corps marshal, Federal Road Safety Corps (FRSC), Boboye Oyeyemi, has honoured some outstanding staff for their contributions to the success story of the agency.

The awards, presented to the staff at the headquarters of the FRSC over the weekend, were in partial fulfilment of the corps’ policy thrust on consultation, reward and punishment which seeks the operation of wider consultation, recognition of staff for outstanding performance and appropriate sanctions for acts of default which do not conform with the corps’ rules of engagement.

The awards came in various categories to deserving staff of the corps cutting across the departments and corps offices.

One of the awardees, who is an assistant corps commander, Ohaeri Osondu, received a meritorious award as the most outstanding unit commander of the FRSC.

The award was presented to him by the FRSC board chairman, Bukar Bello and the corps marshal.

Ohaeri, who is also a fellow and ranking member of the governing council of the Nigerian Institute of Public Relations and at present the commander of the Lugbe Init command of the Federal Capital Territory (FCT), won the award in recognition of his outstanding performance in the area of routine patrols, rescue services, traffic control and prompt response to traffic-related matters along the critical Lugbe – Airport Road which is synonymous for high density of human and vehicular traffic stretching from the City Gate to the Nnamdi Azikiwe International Airport.

Prior to his present appointment, he had served the corps in various capacities such as media officer at the National Headquarters in Abuja, unit head of operations at Keffi and Bida in Nasarawa and Niger States respectively, head, special duties and external relations and ACC operations at Kaduna sector command.

The corps marshal charged the recipients to see the award as an indication for their hard work and contribution towards achieving the Corps’ Strategic Goals on road crash reduction and calls for more efforts towards realising the collective goals on making Nigerian roads safer.

Reacting to the award in a telephone chat, the award-winning unit commander described the award as the outcome of team work among staff of the Lugbe unit, the corps marshal’s inspiring leadership drive, logistic support from the FRSC management and other positive variables which has motivated officers and men of the unit command in the right direction adding that the staff will not rest on their oars towards ensuring safer road use along the Lugbe-Airport Road.

7 Incredible Health Benefits Of Strawberries And Why You Should Eat More... Click Here For Details
Tags: FRSC
SendShareTweetShare
Previous Post