PDP Crisis: Leave Us Out Of Your Travails, APC Tells Ayu 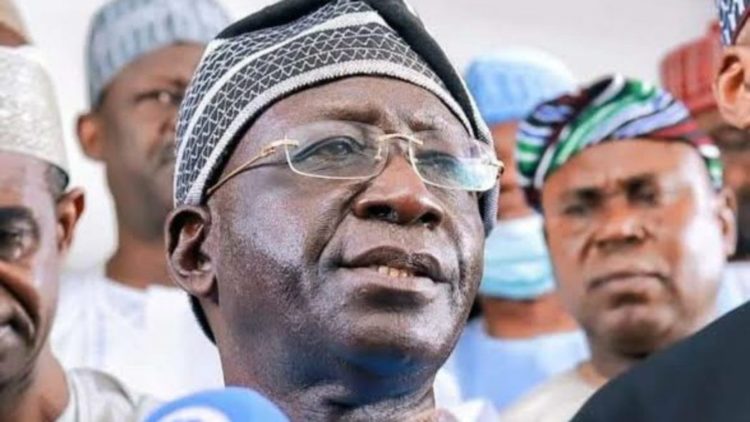 The All Progressives Congress (APC) has cautioned national chairman of the Peoples Democratic Party (PDP), Iyorchia Ayu, against dragging it into the travails of the opposition party.

The governing party was reacting to allegation by Ayu that it had been planting stories in the media to further stoke the feud between him and Rivers State governor, Nyesom Wike.

Reports had quoted Ayu as alleging that Wike could not father a child, a statement Ayu denied and blamed on the APC.

But the APC, in a statement issued on Tuesday by its national publicity secretary, Barr Felix Morka, distanced itself from what it described as such a scandalous act, accusing the PDP national chairman of looking for who to blame for the hurricane about to consume the opposition party under his leadership.

Describing Ayu’s allegation as an escapist mindset approach, Morka said, “As he (Ayu) struggled to deny a statement credited to him that Governor Nyesom Wike could not father a child, the National Chairman of the opposition People’s Democratic Party (PDP), Sen. Iyorchia Ayu, alleged, ridiculously, that the All Progressives Congress (APC) and “other mischievous people” were planting such stories in the media and stoking the feud between him and the Rivers State Governor.

“Understandably, Chairman Ayu is deep in quicksand and swinging wildly in search of third parties to blame for the internal combustion in the party that he leads.

“With such an escapist mindset, it is not difficult to see why the meltdown in the PDP has proved intractable on his watch. Lacking forthrightness and character to accept responsibility for the crisis in his party, how can he possibly resolve it?

“Unlike the party of Ayu, APC does not “plant stories” and does not meddle in the internal affairs of other parties. That is an area of extreme and unrivaled competence of the PDP. In any event, the PDP is unraveling unstoppably and needs no help from the outside.

“Rather than distract himself in search of an illusory scapegoat, Ayu and stakeholders of his withering PDP should concentrate on finding an anchor to slow the Party’s rudderless drift.

APC wondered how a party like PDP that has proved incapable of governing itself can  govern a country as important as Nigeria.

“After 16 years of ruthless misgovernance and crass failure to reform and reposition itself, quite frankly, the PDP stands morally disqualified from asking Nigerians for their votes in the next general election.

“The ruling APC assured the populace that her attention and concern remain focused on the search for new and creative ways of improving the quality of life of our people, and working to convince them to renew our mandate again in 2023.”

On his part, Rivers State governor, Nyesom Ezenwo Wike, declared yesterday that no amount of intimidation and threats from the leaders of the Peoples Democratic Party (PDP) will deter him from demanding what is right for the people

The governor who insisted that Rivers State has contributed the most to the successes of the PDP since 1999 expressed regrets that the state had not benefited from her dedication to the party.

He alleged that PDP leaders had attempted to go into negotiation with President Muhammadu Buhari and the All Progressives Congress (APC) in 2019, saying he objected to that decision.

Wike spoke while  commissioning the Faculty of Agriculture of the Rivers State University, located at Abara-Etche in Etche local government area of the state.

The governor said: “If you are a Rivers man, you don’t need to be intimidated by anybody…We must take our rightful position. So, nobody should be worried. Intimidating me? Some people tell me, ‘Oh, be careful, they will kill you’. Kill who? Who told you, you will not die first?

“Those of you who are panicking, you don’t need to panic. I have God. What are you afraid of? They have chased us, they fought us but today we are standing very strong.

“Since 1999, I want Rivers people to always reflect on this, to ponder over it. Since 1999, we brought the highest votes for the Peoples Democratic Party. Since 1999, I challenge any state to say they brought more votes than Rivers State.

“If you want our votes, tell me what you give will to Rivers State? Nothing can be for dash again. Enough is enough of using Rivers State and thinking we are foolish people and we don’t know what to do with our money.

“Tell us what you are going to do for the people of Rivers State, not for me. There is nothing any of them can do for me but I am interested in my state, nobody can buy me.

“I am not going to look for position from anybody. Have I not been a minister before? So, what are you now going to entice me with as a person? Nothing. If you don’t tell me what the state will gain, then forget me.

“No amount of intimidation, no amount of threats. This government fought us but we survive. Most of them who are talking now, if this Federal Government had descended on them, they would have crumbled.”

Meanwhile, the Pan Niger Delta Forum (PANDEF) has declared that Nigeria will not remain the same if power still remains in Northern Nigeria after the expiration of President Muhammadu Buhari’s eight-year tenure.

PANDEF vowed to mobilise their people from the creeks to reject such injustice.

Speaking when the leadership of PANDEF visited the presidential candidate of the Social Democratic Party (SDP), Prince Adewole Adebayo, national publicity secretary of the organizmsation and chairman of the Delta State chapter of the Association, Ken Robinson, said there is a presidential candidate they will never endorse.

He noted: “After eight years of the Buhari presidency, another will want to retain power. Let me repeat to you, I was on TV after the PDP primaries. And there were speculations that the ticket of the APC is also likely to go North.

“In fact, the national chairman said they have a consensus candidate in person for the Senate president. And I said that if the two major political parties present Northern candidates, it will be a declaration of war in Southern Nigeria.

“We are in a situation where an administration has operated a system as if others do not exist. There are 17 military, para-military and Intelligence security agencies in the country. At the last count, 14 of them are from the Northern part of the country, three from Southern Nigeria. There are six zones. So, even if you distribute two each to each region you still have five you can share the way you want.

“The NNPC limited, as it is called, has 11 key management and board members. The south South has one person. South East has two, South West has one. Four to seven.”

“When the campaign starts, we will mobilise ourselves, speak to good Nigerians in Northern Nigeria and in Southern Nigeria why the next president of Nigeria should come from the Southern part of Nigeria. We were in a meeting with people from the Dutch Embassy; three days ago I was in a meeting with the British High commissioner and we told them this thing that Nigeria will no longer be what it had been if the next president goes North. The statement is not a threat. And we are serious. We will mobilise our people in the creeks, in the farmlands to the streets across Nigeria to work together. There are many people who don’t like what is going on. The Honourable Minister, Solomon Dalung, and other million people in the North who have clear conscience and who are sincere Nigerians want Nigeria to be better”.

Robinson said they were meeting with the presidential candidate to ensure that anyone that emerges governs well.

Also, the presidential candidate of the SDP, Prince Adewole Adebayo, said the meeting is part of a conversation that will help Nigeria.

He noted: “The conversation has begun. It won’t end today because it involved PANDEF, Afenifere and the Middle Belt. The unity of Nigeria is number one. There is no room for casting doubt on the continuity and unity of Nigeria, ” Adebayo said, adding that not a single square meter of Nigeria will be taken away.

“Niger Delta has been a source of stupendous wealth but nothing can’t be cured with justice.

“I view Niger Delta people as Nigerians first. Let’s leave the oil first. They are Nigerians. We are dealing with the Niger Delta in our government as human beings if we emerge.

“This division will cease to be relevant because when a just man is on the throne people rejoice. You need a righteous man not Hausa, Igbo Yoruba to be the next president.

“For this reason, I share the sympathy of the Middle Belt and Niger Delta. From region to region, from agenda to gender, power should rotate. We will not look at ourselves from where we are coming from, we will give Nigerians the needed leadership”.