Peter Obi Has No Plan To Leave Labour Party – Chairman 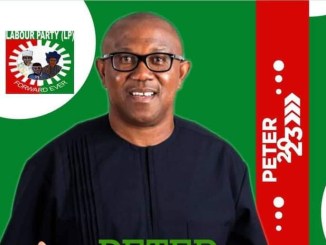 The national chairman of the Labour Party (LP), Barr Julius Abure, has said that the party’s presidential candidate, Mr Peter Obi, has no plan to leave the party.

According to Abure, the consultations that is said to be ongoing regarding Peter Obi, Atiku Abubakar and Rabiu Musa Kwankwanso only centered on how people can support their candidates to win the 2023 general elections.

Speaking at a press conference to mark Democracy Day on Monday, Abure, who said democracy has not reflected a better life for Nigerians, added that Obi and the Labour Party have embarked on a movement championed by the youths for a better Nigeria.

“Section 17 of the 1999 Constitution as amended shows clearly that the principal purpose of government is the provision of security.

“Section 18 says the national economy must ensure maximum welfare for the people. Today, Nigerians are only crying for the protection of their lives but the government is unable to provide that minimum benefit.

“Democracy has not been reflected in the lives of the people because 80 million people are living below the poverty line. Existing income cannot provide the basic needs of  the people.

“As we commemorate democracy, we need to struggle more because the Labour Party has become the symbol for great movement. That is why we produced Peter Obi as the presidential candidate and he stands out among the candidates,” Abure said.

According to Abure, if Obi becomes the president, he will give the country a better life.

“He (Obi) says Nigeria will move from consumption to production, that is why he is in the labour party.

“We know that a productive economy is from the workforce which is labour and the Peter Obi project is in tandem with the Labour Party. Obi has the answers to the numerous Nigerian challenges.

“With Peter Obi as president, it is the people that will drive the process and Nigerians should not make the mistake of voting people we already know their antecedents,” Abure disclosed while calling on Nigerians to ensure they get their PVCs.

On the debate for a Muslim-Muslim ticket, Abure said anyone thinking about same faith ticket should have a rethink, saying that such will not fly.

“Nigerians have been divided by the current government. Anything that will further divide the people should be avoided. It was Muslim/ Christian ticket and now should be Christian and Muslim ticket which the labour party will fly,” Abure said of the alliance option that is on the table.

“There is nothing wrong with talking. The discussion is centred around people coming to work with Peter Obi. He has stated categorically that he is not thinking of being a vice president and not thinking of leaving the labour party because it is a movement and we shall not play the second feadle.

“The discussion ongoing is how many people will work for Peter Obi because he is in a movement. Since other regions have had the presidency, the most reasonable thing to do now is to ensure that the most competent person in the South East gets it. But Obi stands out as the best among the candidates and he is not pushing for a regional card because he is eminently qualified,” Abure added.