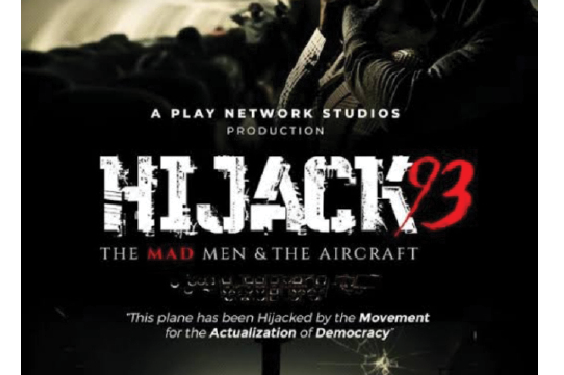 Entertainment power houses,Play Network Studios and Native Media,in collaboration with UK-based filmmaker, Femi Oyeniran,are set to produce a new movie,’The Hijack 93’. The movie is based on a true-life story about the 1993 plane hijack,that occured after the annulment of the 1993 presidential elections, presumably won by the late Chief MKO Abiola.

The co-production, largely supported by the United Kingdom Government Department of International Trade (DIT), who have been actively seeking and facilitating UK-Nigeria co-productions in the film and television sector, and the British Film Institute, BFI, which aims to tell this legendary African story through the prism of motion pictures.

According to Charles Okpaleke and Rogers Ofime, producers’ of the movie “In 1993, four Nigerian teenagers championing a Movement for the Actualization of Democracy, (MAD), found themselves on board an aircraft heading to Abuja from Lagos. Midway into the journey, the MAD men overpowered both crew and passengers, and hijacked the plane.

“After several attempts to coerce the pilot to re-route the flight to Frankfurt, Germany, in a protest showing their dissatisfaction for the series of events that followed the June 12 elections that democratically elected Moshood Kashimawo Olawale Abiola, MKO Abiola, as the Nigerian president-elect.

“They explored the option of landing the plane at Niamey, Niger Republic, where they held the plane hostage for 70 hours with demands to enthrone democracy in Nigeria.”

Charles Okpaleke, Chief Executive Officer, Play Network Studios, disclosed his initiative to create a movie based on this true-life story.

Charles, the man behind the initiative, with award-winning movies, including but not limited to Living in Bondage, Rattlesnake: the Ahanna Story and Glamour Girls, brings to the partnership his innovation, audacity and dedication to excellence.

According to him, “I’ve just approved the final draft of this exciting thriller, and my team and I are set to commence principal photography.

The comments I received from friends, acquaintances and well-wishers, far and wide, locally and internationally were filled with excitement and encouragement.”