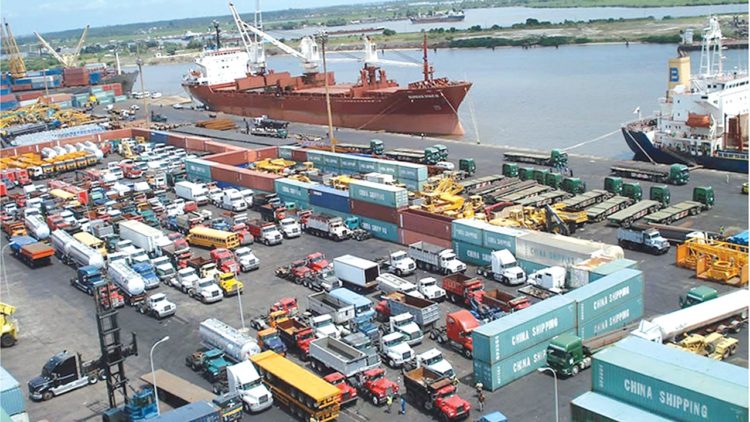 Lack of a proper evacuation plan is threatening the development of various deep seaport projects across the country valued at N5.7trillion ($14 billion), LEADERSHIP Weekend findings have revealed.

Using the dollar to Naira valuation of one dollar translating to N410, the $14 billion valuation of the nation’s deep seaports translates to a cumulative amount of N5.7 trillion. Before now, there had been hope that the development of various deep seaports across the country would solve the lingering infrastructure challenges facing the Apapa and Tin-Can Island seaports.

But bad roads and lack of railway linking the seaports have dashed such hope. Stakeholders have identified absence of viable evacuation plans such as railways linkage to the deep-seaport or the free trade zones, alternative roads for evacuation or jetties for cargo evacuation through badges as source of concern for the multi-billion naira projects. The Badagry deep seaport is estimated at N1.3trillion($3bn); the Ibom deep seaport is worth N1.9 trillion ($4.6billion), while Lekki deep seaport is valued at N615billion ($1.5billion).

Escravos deep seaport in Delta State is worth N1.2 trillion ($2.9 billion), and the Calabar deep seaport is valued at N820 billion ($2bn), putting the valuation of the nation’s deep seaport projects at N5.7 trillion ($14 billion). The deep seaports were conceived to improve the overall cargo handling capacity of Nigerian ports, thereby increasing Nigeria’s Gross Domestic Product (GDP). The handling capacity of ports in Nigeria is put at 60million metric tonnes, while demand and usage is about 100 million metric tonnes.

These are expected to rise with the increasing population, urban expansion and attendant demand for more markets, thus, increasing Nigeria’s needs for better designed port facilities in tune with increased cargo traffic for the country to be globally competitive. Also, since emphasis is shifting to larger and more economical vessels that require deeper harbour drafts, global logistics trends have made the need for deep seaports more imperative. However, Nigeria commenced the development of deep seaports such as Lekki, Badagry, Ibom, Bonny, Escravos, Bakassi, Bonny, and Ondo, among others, to maximise the enormous potentials in the sector.

The Lekki Deep seaport construction is near completion and will be commissioned in the first quarter of 2022 The $1.6 billion deep seaport project in the Free Trade Zone is without plans for an intermodal transport system necessary for seamless cargo evacuation, and this has remained a mirage and a source of concern for stakeholders. When fully completed, the port which covers 90 hectares of land will feature three container berths, long dry bulk berths and three liquid berths, which will allow it to handle up to 2.7million twenty-foot equivalent units (TEU) of containers per year.

This Lekki deep seaport with a deeper draft of 9.5meters is expected to receive Very Large Container Carriers (VLCCs), vessels that hitherto could not berth at Apapa and Tin Can Island Port. The Bonny deep seaport project, on its own, covers a land area of 275.22 hectares and is to be developed through direct investment by Messrs China Civil Engineering Construction Corporation, (CCECC), Nigeria Limited, on a Design, Build, Finance, Operate and Transfer (DBFOT) basis.

The project scope includes construction of a breakwater, revetment, container berth, general goods berth, dredging of the access channel and turning basin, construction of office buildings and warehouses. The new port with a draught of 17 metres will have a terminal capacity of 500,000 TEUs per annum and 100,000 DWT general cargo berth. The Badagry Free Trade Zone will include a power plant, oil refinery, industrial park and warehousing and Inland Container Depot functions. On completion, the deep water full service port will be one of the largest in Africa with seven kilometres of quay and 1,000 hectares (2,470 acres) of dedicated yard, and will include stateof-the-art facilities for container, bulk, liquid bulk, Ro/Ro and general cargo as well as oil and gas operations support and a barge terminal.

Also, the Bakassi deep seaport is to become the second trade port in Nigeria after the Apapa port, and would be the maritime gateway for the country’s landlocked Northeast. The site of the proposed Port of Ondo also has an industrial city with Free Trade Zone status, measuring 2,771.2 hectares.

The site is accessible from Ore through a yet to be constructed dual carriageway from Araromi to Lekki in Lagos, and when the road is completed, it is expected to take only 45 minutes from the port to Lagos. The Ibom deep seaport (IDSP) which is designed for very large vessels that can load over 13,000 containers in one voyage will be a trans-shipment port where smaller vessels will re-distribute cargo from the mega vessels to seaports and river ports closer to the consignees within Nigeria and outside Nigeria.

The port is strategically located to serve the West and Central African Region, JDZ Sao Tome, Equatorial Guinea, Cameroun, Angola, Gabon, Congo, Congo DRC and Chad, with 5,129 hectares for port development. The above-mentioned seaports, when fully onboard, will receive VLCC vessels but with no plan for intermodalism. For instance, the road leading to Badagry and the seaport is in a dilapidated condition even though the government has been constructing it for a long time without any headway.

Also, in the proposed Ibaka, Escravous and Calabar deep seaports, the roads had been deplorable and cannot handle the type of cargoes coming from the VLCC. The federal ministry of Transportation had said extending the rail system to Lekki deep seaport and others might not be a priority now and may not be possible during the present administration. Corroborating the ministry’s position, the Nigerian Railway Corporation (NRC) said there is no budgetary provision for railway linkage to Lekki or any other deep seaports in the 2021 budget. But stakeholders have argued that the absence of viable evacuation plans such as railways linkage to the deep seaports or the free trade zones and alternative roads for evacuation or jetties for cargo evacuation through badges would hamper the takeoff of these seaports.

They, however, warned that the mistakes of Apapa and Tincan ports should be avoided wherever deep seaports are sited, adding that modern facilities should be put in place while constructing them using the world best practices and processes. The stakeholders who expressed worry about the new deep seaport in Lekki said they are yet to see connectivity, warning that absence of intermodalism would mar most ports in Nigeria. Speaking on the absence of intermodalism at the deep seaports in Nigeria, the national vice president, Association of Nigerian Licensed Customs Agents (ANLCA), Kayode Farinto, said the Nigerian government is creating another Apapa-like traffic monster with deep seaports across Lagos and Nigeria.

According to Farinto, to have functional deep seaports Nigeria must ensure all the modes of transportation are connected to forestall creating the kind of traffic gridlock currently being witnessed in Apapa. He said, “We can’t have a deep seaport without intermodal transport system. If we don’t have intermodalism then what we want to have in Nigeria is a theoretical deep seaport and not a pragmatic one.

Farinto stressed that deep blue projects in Nigeria are nothing but a white elephant projects as absence of rail, well-built and connected roads linking the ports are missing. He said in developed countries, connectivity is the first for the government to put in place even before building the deep-seaports. “In Nigeria, the government is talking about building the deep seaports before linking it to rail.

By now, we should have a super highway at Lekki under construction. Isn’t it supposed to be in pari-passu? But what do we have? A tiny or bad road leading to deep seaports. “If I am to go to Badagry now, we will be on the road for seven hours because the road is bad. So, I believe most of these seaports are white elephant projects that the government is pursuing.

“We don’t have intermodal transport system, no port development plans. What happens to our port in ten years? Government cannot tell us; no consistency in policies. So, talking about deep seaports is a white elephant project. But for now, Nigeria is not ready for deep seaports development until we are ready for intermodal development,” he added. Also, a lecturer at the Lagos Business School (LBS), Dr. Frank Ojadi, also bemoaned the absence of plans for inland water access and rail linkage to deep seaports in Nigeria.

While considering the huge traffic that would be created by the deep seaports and other major projects cited in the area, he reiterated the importance of intermodalism to the deep seaport projects. According to him, deep seaports are essential because good nautical access is important to connectivity of ports. Ojadi said, “Over the last decades, ships have rapidly become bigger and deeper. For example, the draft of the largest container ships at this moment is approximately 14.5 metres, which is deeper than what most ports can accommodate.

“Port depth thus becomes a competitive advantage for attracting the largest ships and a challenge for many ports that are estuaries and have no direct deep-sea access.” He added that deep seaports would create opportunities for transshipment operations, generate more employment, promote local shipping business and boost trade in the country.

Everything About The Bored Ape Yacht Club

Everything About The Bored Ape Yacht Club