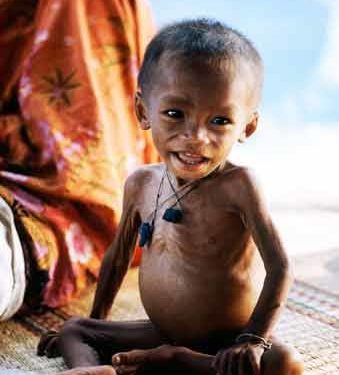 Given that an undernourished country is a poor country and its future is dependent on the children, Nigeria risks a bleak feature as it raises generation of children with poor mental development due to malnutrition.

Malnutrition refers to deficiencies or excesses in nutrient intake, imbalance of essential nutrients or impaired nutrient utilisation. The double burden of malnutrition consists of both under-nutrition (stunting and wasting) and overweight (obesity), as well as diet-related noncommunicable diseases, says the World Helath Organisation (WHO).

The United Nations Children’s Funds (UNICEF), describes stunting as what happens to a child’s brain and body when they don’t get the right kind of food or nutrients in their first 1,000 days of life to two years of age.

However, Nigeria has the highest burden of stunting in Africa and second highest in the world next to India. The country’s current nationwide childhood under-nutrition indicator stands at 37 per cent stunting, 7 per cent wasting and 23 per cent underweight (NDHS, 2018).

Worse still, the COVID-19 pandemic and insurgency has deepened the challenge of accessibility to safe and nutritious foods and saw malnutrition rates soaring across the country particularly among children.

This exegarbate danger has therefore, stressed the need for the governments to act on commitment to the Sustainable Development Goal (SDG) 2 – to achieve Zero Hunger by 2030.

A lecturer from the Department of Mass Communication, Enugu State University of Science and Technology, Enugu, Ezinwa, Chidiebere Anthony, said SDGs cannot be realised without fulfilling the rights of children.

Anthony, in his presentation at a media dialogue on Sustainable Development Goals (SDGs) as Child’s Rights, organised by UNICEF and ………….in Enugu State noted that many rights of children are yet to be fulfilled in Nigeria. Hence, Nigeria is far from realising the SDGs.

“Embeded in each of the SDGs are several rights of children to be fulfilled without which progress would be made in achieving the SDGs,” he said.

Failure to prevent and treat malnutrition can result in

It costs $120 (~ N60,000) to treat malnutrition through Integrated Management

of Acute Malnutrition (8times the cost of prevention)

Given that an undernourished country is a poor country and its future is dependent on the children, this story seeks to throw light on the role of nutrition in the physical and mental development of children. It also will focus on the impact of poor individual productivity on gross domestic product.

Sovereign Debt Relief Mechanisms And Reflection On Their Effect