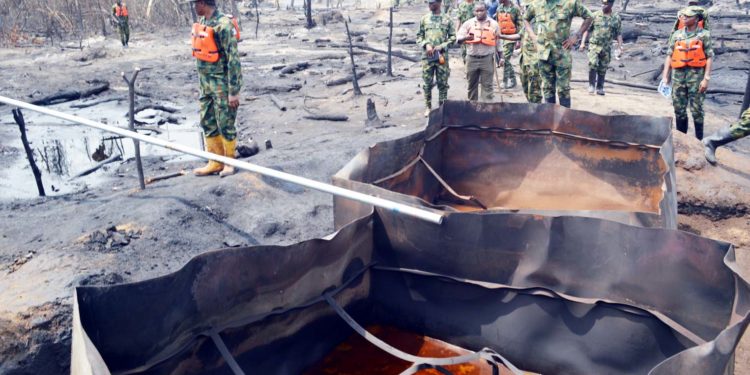 As the impact of crude oil theft and pipelines vandalism continue to ravage the Nigerian economy, the Petroleum and Natural Gas Senior Staff Association of Nigeria (PENGASSAN) has charged the federal government and security agencies to hold accountable and prosecute oil theft perpetrators in the country to curb the menace.

The union, which is staging a nationwide street rally in Abuja, Kaduna, Lagos, Warri, today, to protest the impact of crude oil theft, decried high level ‘collusion and connivance’ involved in the crime, which has left Nigeria broke and borrowing heavily to finance its appropriations at a time that oil prices have remained consistently high in the internal market.

Addressing journalists in Abuja, yesterday PENGASSAN president, Festus Osifo, charged the government to hold those whose responsibility is to protect oil pipelines to account.

He said the rally is commencing by 9a.m., in the streets of Abuja, Kaduna, Lagos and Warri simultaneously.

The association threatened to withdraw their services should the government fail to take decisive action against oil thieves, as the current situation already affects its members in oil-producing companies that have been shut down due to theft.

He said Nigeria is losing over 600,000 barrels of crude oil or over N25.8 billion daily to theft and pipeline vandalism and this is costing the nation dearly.

“The OPEC quota for Nigeria today is above 1.8 million barrels of crude oil per day. But we struggle to produce just over a million because majority of this crude oil are stolen.

“This is the first time in a number of years that crude oil price is increasing astronomically to over $100 per barrel in the international market. But as a country we are broke, we have been borrowing  overseas to finance our appropriation. This year alone our government has borrowed over N6 trillion to N7 trillion to finance the budget.”

“Calculate how much we are losing per day both in dollar terms and in Naira equivalent. Take 600,000 barrels and multiply it by about an average of $100 and multiply it by the CBN official exchange rate. This is what the country loses daily. But as a country we are still borrowing because we cannot stop this illegality, Osifo lamented.

He called on the Nigerian Army, Navy and Airforce to prosecute and jail their officers who are conniving with criminals to perpetrate the crime.

Specifically, Osifo said that Nigerians and particularly their members are tremendously affected by the menace of oil theft, as oil companies are retrenching workers as a result of incessant losses they incur due to the theft of the product.

His words: “Government must develop the muscles and political will to go after oil thieves.

“The GMD of NNPC last week said that everybody is involved in the oil theft. Everybody he meant are the security agencies, some oil and gas workers, host communities and some other Nigerians.

“So it is total collusion and connivance. That means that security agencies cannot be excepted from the ongoing oil theft.”

“Maybe at best, out of the 10 vessels that are stolen, you bring only one and said you have caught the people stealing oil, what then happened to the rest? So the rhetorics must stop. This is the time for us to act.”

Also, he said: “Nigerian security men and women now struggle and lobby to go to the Niger Delta to protect oil pipelines and waterways. Yet while they are there, vessels are being stolen every day. Looking at the scenario, you can only imagine what really is the motive. Obvious the collusion to theft oil is there and it must stop.

“Government must wake up and there must be consequences to the management of crude oil security. You cannot send Naval, officers, men and women of Nigeria Army and Civil Defence officers to the creeks of Niger Delta and you don’t develop a mechanism to hold them accountable.

“Accountability is key. When you send people to a terminal and oil is being stolen there, how many of the people in that terminal are prosecuted and sent to jail? If there are no consequences to the management, there won’t be solutions.

“So we call on the Chief of Army Staff, Chief of Naval and Airforce to hold the soldiers and officers they send to protect the waterways and pipelines accountable and anyone that is found guilty should be sent to prison for the purpose of a deterrent.”

He added, “What we are saying is that there is total connivance and collusion in the oil theft menace in Nigeria. And that the talks must end while actions must be taken.

1xBet Is The New Official Regional Partner Of LOSC Lille

1xBet Is The New Official Regional Partner Of LOSC Lille