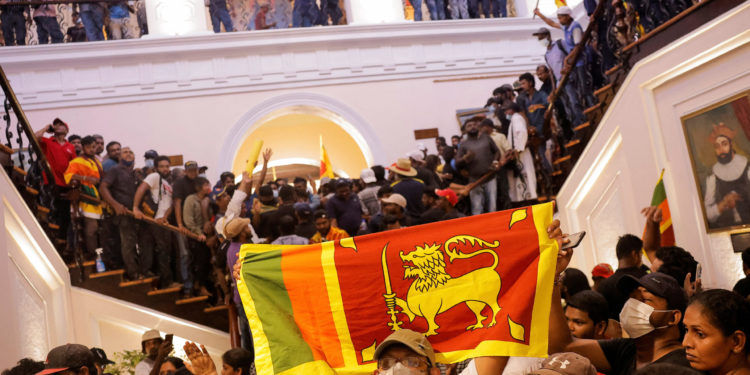 Sri Lanka’s President Gotabaya Rajapaksa plans to step down, the country’s parliamentary speaker said on Saturday, bowing to intense pressure after a violent day of protests in which demonstrators stormed the president’s official residence and set fire to the prime minister’s home in Colombo.

The announcement, following the dramatic escalation in months of largely peaceful anti-government protests over a dire economic crisis on the Indian Ocean island of 22 million people, triggered an eruption of celebratory fireworks in the city.

There was no immediate word from the president himself.

Speaker Mahinda Yapa Abeywardena said in a video statement that Rajapaksa had informed him that he would step down from his post next Wednesday.

“The decision to step down on 13 July was taken to ensure a peaceful handover of power,” Abeywardena said. “I therefore request the public to respect the law and maintain peace,” he said.

Prime Minister Ranil Wickremesinghe also said he was willing to resign to make way for an all-party government, his office said in a statement on Saturday evening.It was not yet clear if this would quell popular anger.

Details of how a transition of power would take place were also not yet known, although the speaker earlier outlined proposals from a meeting of political parties on Saturday that would include parliament picking an acting president within a week.

Throughout the day, soldiers and police were unable to hold back a crowd of chanting protesters demanding Rajapaksa’s resignation and blaming him for the country’s worst economic crisis in seven decades.

Police fired shots in the air but were unable to stop the crowd from surrounding the presidential residence, a witness said.

Neither Rajapaksa nor Wickremesinghe were in their residences when the buildings were attacked.

Inside the president’s whitewashed colonial-era residence, a Facebook livestream showed hundreds of protesters, some draped in the national flag, packing into rooms and corridors.

Video footage showed some of them splashing in the swimming pool, while others sat on a four-poster bed and sofas. Some could be seen emptying out a chest of drawers in images that were widely circulated on social media.

Rajapaksa had left on Friday as a safety precaution ahead of the planned weekend demonstration, two defence ministry sources said.

Reuters could not immediately confirm his whereabouts.

Later on Saturday, video footage on local news channels showed a huge fire and smoke coming from Wickremesinghe’s private home in an affluent Colombo neighbourhood. His office said that protesters had started the fire.

There were no immediate reports of injuries in the blaze. Wickremesinghe had moved to a secure location, a government source told Reuters early in the day.