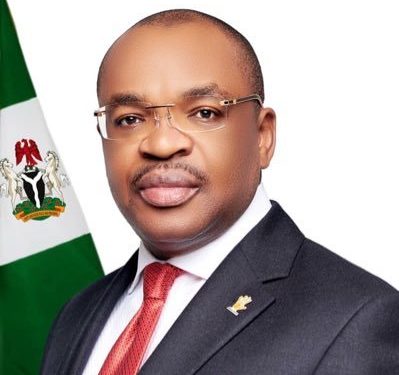 The Niger Delta Young Professionals (NDYP) has called on the presidential flag bearer of the Peoples Democratic Party (PDP), Alhaji Atiku Abubakar, to pick Governor Udom Emmanuel of Akwa Ibom State, as his running mate to win the hearts and support of young Nigerians who form the bulk of eligible voters.

The forum noted that Governor Udom’s leadership style in Akwa Ibom State has aggressively attracted an array of industries, sustained public-private sector initiative, and has opened up opportunities for growth and improved living standards, especially for young people, who are engaged and employed with his various investments and projects.

NDYF, which made the clarion call in a communique issued by his spokesperson, Dr. Kingsley George, stressed that the governor stands out among counterparts like Delta State’s Ifeanyi Okowa and Rivers State’s Nyesom Wike, who have all been pencilled down as possible running mate for Atiku.

According to the NDYP, the choice of Udom was tied to his grand achievements in Akwa Ibom, which it said were visible for all to see.

“He is an astute professional, a seasoned banker, he is industrialising Akwa Ibom State,” the group said.

The NDYP made particular emphasis on Ibom Air, which is a state investment and a professional carrier that meets global standards. The young professionals in the oil-rich region also noted that the Ibom Air project has created jobs for so many young Nigerian graduates.

“He has a pact with young people, and he is deliberately building a future for our teeming youths in terms of job creation, and this is what is key and this is what the country is lacking at the moment.

“Based on these facts, the NDYP is encouraging Atiku to adopt Udom as his running mate. Other governors in the region have not matched his achievements based on industrialization and strategic job creation,” the NDYP added.

The NDYP also recommended former Cross River State governor, Donald Duke, and Timi Alaibe as possible choices out the governors circle, who also have the interest of young Nigerians at heart.

In an earlier meeting in Abuja, Mr Moses Siloko Siasia who doubles as the chairman of the Nigerian Young Professionals Forum (NYPF) and the Green Nigeria Movement (GNM), had stressed that the groups will mobilise support for candidates who are professionals, technocrats and have the genuine interest of Nigerians and most importantly young people at heart, going into 2023.

The NYPF, which has a massive number of followers, had further stressed that Nigeria needs a President that can fight off the endemic problem of insecurity and unemployment among youths that has given in to unlawful activities and substance abuse.