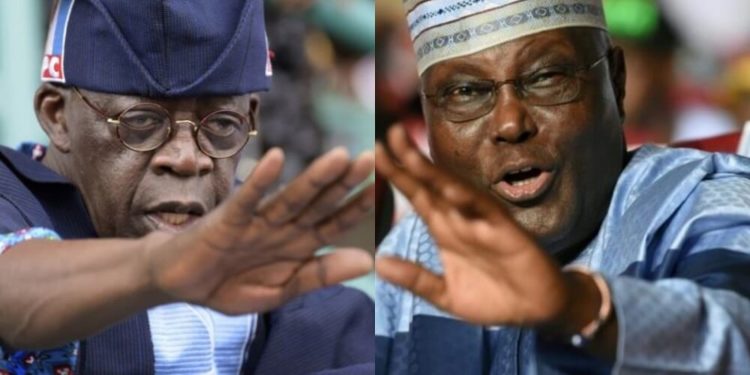 Presidential candidate of the ruling All Progressives Congress (APC), Asiwaju Bola Ahmed Tinubu on Saturday has challenged claims by Atiku Abubakar, the Presidential Candidate of the Peoples Democratic Party (PDP), that he rejected the former Lagos governor as his running mate ahead of the 2007 presidential election.

Challenging claims made by Abubakar, a former Vice President, in a recent interview, Tinubu instead made counterclaim that Atiku actually offered him the opportunity to the vice presidential running mate on the platform of the Congress in 2007.

To this, Tunde Rahman, spokesman to the APC presidential candidate said there are witnesses who can come forward should Atiku insist on misleading Nigerians that he has had misgivings about a Muslim-Muslim presidential ticket.

The former Lagos State Governor, in a statement issued Saturday evening by his Media Office and signed by Tunde Rahman said Atiku had in 2007 promised him the vice presidential ticket and later reneged on the promise, just as he did recently with Nyesom Wike, the Rivers State governor.

According to him, the former vice president also used the same deception on  Wike whom he promised the vice presidential ticket after the PDP primary election but reneged.

Reacting however, Atiku Abubakar described Tinubu’s comments on the interview as a knee jerk response to a wave making interview. The PDP presidential candidate has however not provided more details about what transpired between him and Tinubu back in 2007.

The APC candidate said “all Nigerians should feel great pity and sadness for the candidate of Peoples Democratic Party, Alhaji Atiku Abubakar”  noting that Atiku in a desperate attempt to win the election by stoking religious bias, has reduced himself to uttering baseless lies on national television.

It would be recalled that Atiku had on Friday featured on Arise Television where he said Tinubu ditched him in 2007 because he (Atiku) was opposed to having a Muslim-Muslim ticket.

Tinubu said, “We are saddened to see such a man become unhinged from the truth. So obsessed is he with his quest for office, Atiku is willing to render any form of untruth if he thinks it might gain him a single vote. Atiku may want to be president. However, all he has shown is that he is a pathological liar.

“Whatever moral compass he (Atiku) had has been lost. During a 22nd July television interview, Atiku assaulted historic truth by lying that he did not name Tinubu as his running mate in 2007 on the Action Congress ticket because Atiku did not want a Muslim as his running mate.”

Setting the records straight Tinubu explained that Atiku was not among those who founded the defunct Action Congress, saying “It was the actual founders of the AC who offered the party’s flag to Atiku because of the need to fight the authoritarian designs then President Obasanjo and the PDP had on Nigeria’s democracy.

“At that moment, Atiku had been unceremoniously pushed aside if not out of the PDP by Obasanjo. We needed to rally all forces to confront the one-party state Obasanjo had in mind. Atiku was simply a beneficiary of this collective duty to fight the attack on multi-party democracy the PDP had launched.

“I feel sorry for dear old Atiku. Love of his own ambition has eclipsed his relationship with the truth and an honest account of the past. We formed the AC without his knowledge. When President Obasanjo virtually exiled him from the PDP, we lent him our support by giving him the AC platform for the 2007 election.

“Let me say openly that Atiku offered me the vice presidential ticket in 2007. Let me also say that my religion has not changed. When he offered the position to me, I was a Muslim and I believe he was aware of my religious faith at the time.

“Atiku’s calculations and deceit had nothing to do with religion or his sensitivity to it. His conduct has everything to do with what we discovered about his paucity of character and love of intrigues.

“When it comes to intrigues, we can say that Atiku is without bias. He will attempt to lie and deceive both Christians and Muslims with equal vigour.

“Atiku has no business raising the issue of a Muslim-Muslim ticket except as a hypocrite. Perhaps he believes people have forgotten his antics during the 1993 election. After he woefully lost his bid to be the presidential candidate of the Social Democratic Party, what did he do? He canvassed and lobbied harder than anyone to become the running mate to late Chief MKO Abiola. When it benefitted him personally, Atiku did not see anything wrong with Muslim-Muslim ticket. He saw everything right in such a ticket as long as he was on it.

“Now, Atiku criticizes my selection as running mate based on religion. He does so because he cannot criticize it on other grounds. If Atiku were to have one of his rare moments of honesty, he would admit that the person I selected as my running mate is more qualified for the position than the man who joined him. And this conclusion has nothing to do with religious faith. It has everything to do with competence, experience, ability, and vision.

“My running mate and I are here to build a more just and prosperous society for all Nigerians, be they Christian, Muslim or adherents of other faiths. It seems that Atiku is here trying to build an edifice of lies and call that the house into which Nigerians should walk and reside. He will fail in this sad attempt to trick an entire nation.

The director, Media & Communication of Tinubu Campaign Organisation, Bayo Onanuga, also responded to the Atiku interview saying they were shocked by the many lies and ignorance displayed by Atiku.

Onanuga said Atiku exposed himself as a man who is not prepared for the job he is applying for and a man who can not be entrusted with our commonwealth.

“He was flippant in his response to important questions about his record of service and how he made money while serving in Customs. He muddled up facts and exhibited befudling absence of mind.”

Giving details Onanuga accused the PDP candidate of being a law breaker, adding that it was most shocking for him to have admitted that he cheated the system for decades and engaged in gross misconduct as a government worker.

“As a customs officer at the Idi-Iroko border, Atiku revealed that he ran a commercial taxi service, claiming ‘there is no law stopping public officers from doing business in Nigeria”. He punched harder, claiming there is no conflict of interest in doing so. We found this to be untrue.

“Every officer in the civil service is expected to comply with a code of conduct and service rules which bar civil and public servants from engaging in private business while in government employment to the detriment of the service he/she is employed to render to the public. The 1999 constitution further codifies this in Part I, Fifth Schedule, Section of 2 (b).

“It says a public officer shall not, except where he is not employed on full-time basis engage or participate in the management or running of any private business, profession or trade. The rules however allow a public officer to engage in farming.

“We wonder which rule or which law Atiku was relying upon for his gross misconduct as a public officer.  It is our considered view that Atiku gamed the system all through his career in public service, culminating in his founding of the Intel Logistics along with Late Shehu Yar’Adua and some Italians, even while he was still in the employment of the Nigeria Customs Service.”

The Tinubu team also said Atiku has poor knowledge of key sectors of the economy, noting that it was surprising that he does not know the contribution of oil and gas industry to Nigeria’s GDP.

“He claimed the sector represents 20% of our national GDP whereas it is below 10 percent and it is still falling owing to the growth of non-oil sector under the current All Progressives Congress led administration of President Muhammadu Buhari.”

Atiku’s media adviser, Paul Ibe, in a counter statement, said  Tinubu has not sat down to do any prolonged interview for obvious reasons, adding “Nigerians have seen him talk in public and can themselves gauge the reason why he is mortified to do so.”

Reacting to the issues raised however, Atiku said

“The Tinubu campaign exposed its gross desperation and vacuousness by citing the provisions of the Constitution of the Federal Republic of Nigeria (as amended) 1999, to declare Waziri Atiku Abubakar’s stance on engaging in a side business while he was a young custom officer as a breach of the law. It is pertinent to educate the Tinubu campaign organisation that Nigeria is not under a military regime and our Constitutions are not retroactive in nature.

“Again, the Tinubu campaign betrayed either dishonesty or lack of attention to detail by claiming that Atiku Abubakar said oil contributed 20% of Nigeria’s GDP. That is a lie. What the Waziri said is as follows:

“Oil only maybe accounts for about 20% of our GDP”.

“The use of the word maybe by the Waziri was in reflection to the different figures given. While the Nigerian Bureau of Statistics states a figure close to 10%, other multilateral organisations have given a much higher figure of between 15-20%. So, while the jury is still out, it is right to qualify the contribution of oil and gas as a maybe. However, we do like to point out that Waziri Atiku Abubakar mentioned both the PDP and the APC during the interview and did not forget the name of his own party.

“It seems the Tinubu campaign organisation (can a disorganised body be called an organisation?) does not know the meaning of rotation of power and micro zoning. So, we will gladly educate them. Rotation of power refers to a constitutional provision where power is zoned between North and South. Micro-zoning refers to a non constitutional idea, where power is zoned not between North and South, but amongst geo-political zones. We hope this cures the political illiteracy of the authors of that document.

“The rude response also accuses Waziri Atiku Abubakar of having “limited education”. Atiku Abubakar has an earned Masters degree from Anglia Ruskin University. We challenge any of the present Presidential candidates to present an equal or higher degree. Moreover, his university attendance is a matter of verified record. Can we say the same about some other persons?

“In conclusion, we would like to challenge Bola Tinubu to subject himself to an hour long interview, like the Waziri did, and if he is able to be as articulate and mentally present as our candidate, then he can talk. Until then, we will only want to remind him and his yes men that they are not in a position to point fingers when they have not sat on the hot seat,” Atiku’s media aide stated.