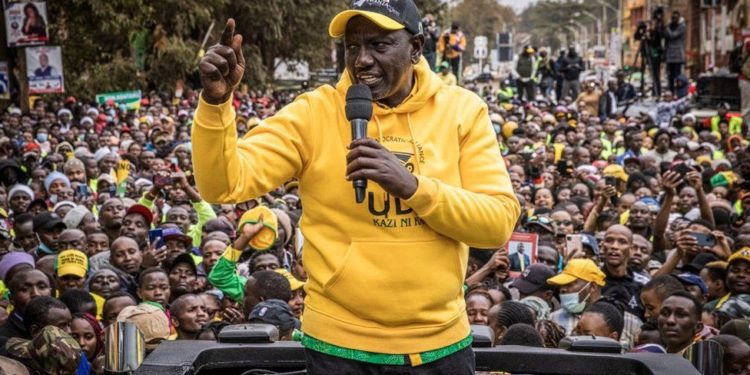 William Ruto has won Kenyan presidential election, according to the Independent Electoral and Boundaries Commission (IEBC) defeating Raila Odinga in a close race. He has also been congratulated by President Muhammadu Buhari who called for sustainability of the cordial relationship between Kenya and Nigeria.

Ruto received 50.49 percent of the vote, the chairman said, while Odinga received 48.85 percent in the keenly contested election amid mounting tension and fear of violence.

After he was declared winner, the president-elect William Ruto vowed to work with “all leaders” in an attempt to ease tensions after the outcome sparked a split in the election commission and fears of violence.

“There is no room for vengeance,” Ruto said, adding, “I am acutely aware that our country is at a stage where we need all hands on deck.”

Four of seven Kenyan election commission officials however, said they “cannot take the ownership of the results” of the presidential election because of the “opaque nature” of counting, according to the commission’s deputy chairperson Juliana Cherera. It is unclear specifically what their complaint is.

There is still palpable tension as supporters of Raila Odinga were reportedly planning a protest outside the Serena Hotel where several election commissioners rejected the recent vote results.

The East African country has a record of post-election violence the most devastating being the 2001 violence that erupted after Odinga lost to former President Mwai Kibaki. About 1,200 people were killed in the violence and nearly 600,000 were displaced.

Outside the National Tallying Centre, there were reports that “commotion” had broken out in the building amid the wait for the presidential results.

Violence at the National Tallying Centre broke out after the results of the election were delayed for several hours. The police had to chase some people out of the auditorium when they started throwing chairs and causing disturbing scenes.

Al Jazeera’s Malcolm Webb, reporting from Nairobi, said the chief returning officer of candidate Odinga implied that vote-rigging had taken place and that the tally centre, where the election commission will announce the winner, was the “scene of a crime”.

“He said he couldn’t ask his candidate, boss Raila Odinga to come here (tally centre) until they had out what sounded like a dispute in the results for the presidential election. So we’re waiting to find out more but we were expecting those results to be announced a couple of hours ago,” he added.
About 65% of Kenya’s 22 million registered voters came out to vote in the poll, in which the economy and high cost of living loomed large. The number was lower than expected amid widespread youth disenchantment. In 2017, about 78% of the electorate cast ballots.
Hassan Khannenje, director of the HORN International Institute for Strategic Studies, told Al Jazeera that “voter apathy” in the 2022 election was likely due to high costs of living and a lack of sufficient economic growth in the country, especially when it comes to people’s incomes.
Meanwhile, President Muhammadu Buhari has congratulated the president-elect of Kenya, William Ruto, on his victory in the general elections on August 9, 2022.
The president in a statement by his media aide , Femi Adesina also commended the people of Kenya for the peaceful and transparent outcome of the elections, which once again demonstrates that the democratic process, values and principles remain the best way for the people to select their leaders and hold them accountable.
Buhari said Nigeria values Kenya as a strategic partner in the fight against terrorism and violence extremism, buoyed by a long history of friendship, economic and trade ties, and effective collaboration through international organisations such as the African Union, the United Nations and the Commonwealth.
While wishing Deputy President Ruto a successful inauguration and tenure in office, the president looks forward to more fruitful and robust engagements between the two countries on shared priorities such as enhancing peace and security on the continent, democracy, and greater economic prosperity and social development.
The Nigerian leader also saluted President Uhuru Kenyatta for his statesmanship and exemplary leadership to the people of Kenya in the past nine years and the profound legacies of his administration on infrastructure, education, healthcare reforms and tourism as well as strong influence and support on regional security.