by Bode Gbadebo
in Business
0 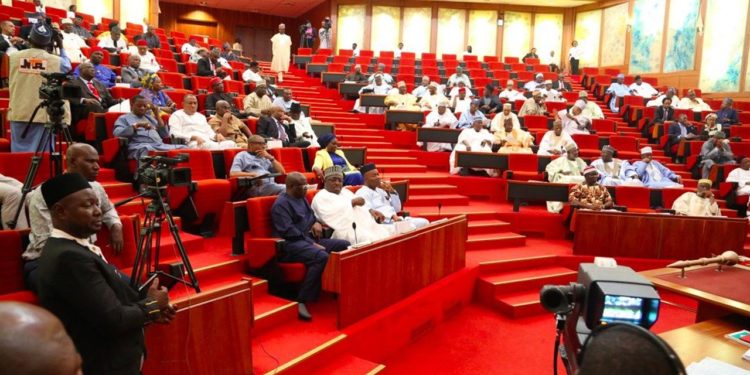 The Senate, on Wednesday, constituted an Ad-Hoc Committee to investigate Shell Petroleum Development Company (SPDC) over non-compliance with the Petroleum Act and breach of the Joint Venture Agreement entered into with the Federal Government of Nigeria.

The Ad-Hoc committee was mandated to probe the Oil Mining Lease (OML) granted to SPDC between 1959 to 1989, and 1989 to 2019 under the SPDC/NNPC Joint Venture agreement.

The Ad-Hoc Committee, which was constituted by the Senate President, Ahmad Lawan, has Senator Aliyu Sabi Abdullahi representing Niger North, as its chairman.

Accordingly, the chamber demanded a refund of $200 million (USD) or any amount short of what was paid by SPDC, including penalties and interests under the said lease agreements  to the coffers of the Federal Government.

The Senate resolution was reached sequel to consideration and adoption of a motion sponsored by Senator George Thompson Sekibo (PDP, Rivers East).

The motion was entitled, “Non-payment of the Sum of $200,000,000 accruals from the Oil Mining Lease (OML), by Shell Petroleum Development Company of Nigeria Limited under the SPDC/NNPC Joint Venture Agreement and, illegal and unlawful renewal of Oil Mining Leases by the Ministry of Petroleum Resources/Department of Petroleum Resources (DPR) contrary to the provision of paragraph 10 of the First Schedule to the Petroleum Act 1969 (now Section 86(1) and 86(6) of the Petroleum Industry Act 2022.”

He observed that doing so constituted an illegal extension of the Oil Mining Lease by 10 years in the first instance, instead of the prescribed term of 20 years, without recourse to the provisions of the Petroleum Act 1969 in paragraph 10 of the First Schedule.

According to the lawmaker, “upon the expiration of the initial Oil Mining Lease in 1989, SPDC/NNPC JV, was granted another 30-year Oil Mining Lease again from 1st July 1989 to 30th June, 2019, by the Ministry of Petroleum Resource/DPR instead of the 20 years lease period prescribed by the Petroleum Act, which is contrary to paragraph 10 of the First Schedule to the said Act.”

He disclosed that in the initial additional 10 years Oil Mining Lease of 1969 to 1989, illegally granted to the SPDC/NNPC JV by the Ministry of Petroleum Resources/DPR, the Federal Government lost from fees, taxes, rents and royalties the sum of $120, 000, 000.

He observed that the illegal action by the Ministry of Petroleum Resources/DPR as regards the SPDC/NNPC JV may not be the only non-compliant grant as details of other Joint Venture agreements with: Chevron Nigeria Limited, ENI Joint Venture, EXXON Mobil Upstream JV, Total E & P Nigeria Limited JV, need to be ascertained through a thorough investigation to verify compliance with the provisions of the extant law.

He expressed worry that that the trend of illegal extension of Joint Venture (JV) period from 20 years to 30 years lease period without recourse to the Petroleum Act may have also applied to other Joint Venture agreements with the International Oil Companies (IOCs) and need to be investigated.

Sekibo informed the chamber that SPDC went to Court on the clarity of the lease period and the judgment was not in their favour as regards the additional 10 years lease period in the two instances.

“Regrettably, the court failed to order the SPDC to pay the arrears the 20 years lease period to the tune of $200,000,000 to the Federal Government for the illegal extensions,” he said.

The lawmaker further disclosed that a whistle-blower petitioned the EFCC on the need to recover the sum of $200,000,000 from SPDC for these illegal extensions by the Ministry of Petroleum Resources/DPR and to further investigate all other Joint Venture agreements that involved the aforementioned IOCs.

He stated further that Section 89 of the same Constitution provides the process on how such investigation should be carried out.

Accordingly, the Senate resolved to constitute an Ad-Hoc Committee to investigate the non-compliance with the Petroleum Act and the Oil Mining Lease granted to SPDC between 1959 to 1989, and 1989 to 2019 under the SPDC/NNPC Joint Venture Agreement; and compel SPDC to refund to the Federal Government the sum of $200,000,000 or any amount short of what was paid, including penalties and interests under the said lease agreement.