A virtually impaired woman who was raped recently made bold to share her ordeal  with ROYAL IBEH amid the need to tackle the worrisome surge of Sexual and Gender Based Violence (SGBV) in Nigeria. 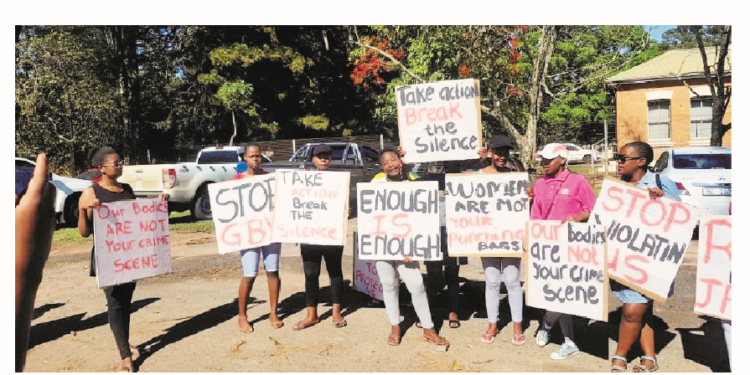 In a small, hard-to-access house in Agegunle in Lagos State, Southwest Nigeria, lives Monica, (not real name) a 35-year-old lady who is visually impaired. She lost her vision due to complications after she had an accident..

Despite living in such a condition, Monica was recently molested sexually, an experience which has left her traumatised. This is despite living with the consciousness that there is no cure for her health condition.

Sharing her experience with LEADERSHIP Weekend, Monica said, “I was not born blind. My life had a twist when I had an accident 10 years ago that affected my eyes. My parents did all they could, to save my sight, but all to no avail.”

Due to her condition, however, Monica could no longer teach which was her primary profession, she had to learn how to design beads to survive.

Amongst others, one of the incidents of sexual violence occurred when she went to visit her friend in Festac Town, Lagos. “At one point, I noticed that I was the only one left in the bus. So, the driver and his conductor, while pretending to assist me, carried me to a quiet place and raped me,” she said.

Monica could not report the incident simply because she was blind. “I don’t know the people that raped me. How can I explain to the police that I was just raped? Where will they even start from? I had to live with the emotional trauma for months and then moved on,” she said.

For Chinasa Okafor, 40, who has been lame from birth, said she had experienced emotional abuse all her life. At a very tender age her father rejected her because she can’t walk.

Okafor said her father constantly reminded her of her disability.

“People who are born without any form of deformity are finding it difficult to survive, how can you that look like tortoise survive?’’ she said while quoting her father’s discouraging utterance.

Even when Okafor finally met the man of her dreams, who later married her, she said her mother-in-law continued from where her father stopped.

“My mother-in-law would call me all sorts of names, constantly accuse me of using charm on her son. She finally told my husband to divorce me or face the risk of being disowned by the family.

“My husband finally succumbed to the pressure. He woke up one morning and told me that I should give him his son; He said he does not want to marry again. He took my six months old son from me and because of my disability, I couldn’t seek help. I started screaming, and people rushed in and took my baby from him,” Okafor explained.

After that episode, Okafor said her husband didn’t stop there and now dared to harass her more.

“He kept threatening me that he would kill me and take my baby. I can’t defend myself, I do not have a family to run to, so I took the needed action to safeguard our lives.

“I rushed to the Baale residence where I reside and told him about the threat. The Baale invited him over and made him promise me that he will never carry out his threat. I didn’t stop there, I took the matter to the Lagos State Human Rights Department, where he signed an undertaking that he will never beat me again or try to steal my baby from me,” Okafor said.

The Prevalence Of SGBV In Lagos State

While Okafor could summon up the courage and defy odds to take action, many Nigerians don’t report such cases.

The bi-annual report (January-June 2021) of the Lagos State Domestic and Sexual Violence Response Team (DSVRT), showed that out of the 1,617 reported cases of violence reported in the months under review, only 0.4 per cent were from people living with disabilities.

The reason for that is not far-fetched, the general manager, Lagos State Office for Disability Affairs (LASODA) Dare Dairo, said, “Even when they share their story, people don’t believe them.”

LASODA’s general manager shared a real life situation that involved a lady with Down syndrome who was raped. “She could identify the people that raped her because they live in her neighbourhood but when the matter got to the police, they said they could not just take the words of someone like her. That was how the matter ended. No justice, simply because of her condition,” Dairo explained.

The executive director of Women’s Rights and Health Project (WRAHP), Bose Ironsi told LEADERSHIP Weekend that people with disability face more violence than people without any form of disability in the sense that people see them as people who cannot report.

To start with, Ironsi said the stigmatization starts within the family members while strangers on the other hand abuse them, but there is no documentation, Ironsi said.

She said, “They can tell you about their sufferings, but hardly will they tell you that they have been sexually abused. Just as people without disabilities do not want to speak out, they are finding it more difficult to speak out as well.

“Imagine somebody who is just at the mercy of her husband, she won’t want to speak out, when her rights are violated, else he won’t feed her or help her again.

She said WRAHP is trying to survey the six geopolitical zones to find out the violence committed against women with disabilities.

“It is higher than what is being documented. They don’t even report and the majority of them don’t know what to do,” she added.

For Dairo, the government needs to increase the penalty for rapists, not just for people with disabilities, but for all women.

“We need a specialized intervention for women with disabilities. Rather than the blame game, there should be a penalty for rapists. That will make the society see people with disabilities as government properties,” he added.

To start with, Ironsi said parents need to educate their children to place values on women. “When they grow up, they will see women (with or without disability), first as human beings, before seeing them as housewives. The moment we recognise and respect that, we will begin to change the narrative of SGBV in Nigeria,” she added.

There should be a particular department that handles cases of SGBV against people with disability, the executive director said.

There is also a need to build their capacity Ironsi said. “The fact that they are living with a disability does not mean they cannot feed themselves. A lot of them have acquired skills in bead making, soap making, snacks, etc, through the Lagos state skill acquisition programme. However, we plead with the government to provide a space for them to sell our products. Government and stakeholders need to include them in their activities and interventions,” she advised.

The executive director said there is a psycho-social support arm of the organisation, which is the Ireti Resource Centre that “assists women who have suffered from SGBV to seek justice if need be.”

She said WRAHP cannot do it alone, adding that, with the help of the European Union Agent for Citizen-driven Transformation (EU ACT) programme, which is being implemented by the British Council, WRAHP has built the capacity of about 20 Non-Governmental Organisations (NGOs) to be able to tackle the issue of SGBV effectively.

“It is very important to build their capacity, because we can’t do the work alone, there is a need for synergy and partnership. With the partnership, we have seen many women in various communities now speaking out, and we have been able to help these women collectively. For instance, we receive up to 12 cases every day across Lagos, at the Ireti Resource Centre,” she explained.

The executive director of the Renaissance Foundation for Peacebuilders (REFOP), Thompson Oloye told LEADERSHIP Weekend, that SGBV against an individual with or without disability, threatens the very principles of human right, human dignity, and equal rights of men and women.

“We are not just helping survivors to get justice, but we are also preventing it and one of the ways of preventing SGBV is through sensitization and awareness creation. We are very much ready and willing to help, whether to get justice (seek redress) or offer psychosocial support,” he added.