For residents of flood-prone areas in Akwa Ibom State, it is respite all the way as the major intervention work by the state government, in conjunction with the World Bank, has come to their rescue. INIOBONG EKPONTA writes. 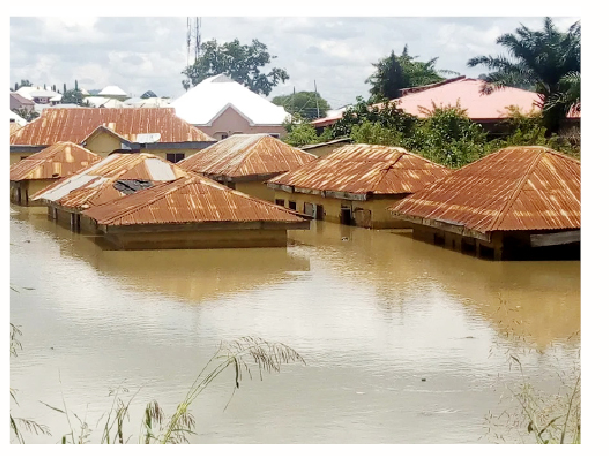 As part of the anniversary events marking the 35th year of the creation of Akwa Ibom State, carved out of the old Cross River State by former Military leader, Major Gen. Ibrahim Babangida (rtd) on September 23, 1987, Governor Udom Emmanuel took time out to commission the massive erosion control project on the IBB Way, Uyo, the State capital.

Emmanuel, who addressed the media on the anniversary, said the project executed in collaboration with the World Bank under the Nigeria Erosion and Watershed Management Project (NEWMAP), cost about $38 million. He said the project would tackle the flood menace across three LGAs – Uyo, Nsit Ibom and Ibesikpo Asutan.

The project was commissioned by the governor of Delta State, Ifeanyi Okowa. The governor recalled that “when I took over the administration, the areas were impassable and the state secretariat was affected.

“I am glad that despite the huge amount of money sunk into the project, the people who are beneficiaries have been relieved of the pains they go through during the rainy season”.

According to him, the project which spans 10 kilometres across 18 villages in three LGAs, “is the largest by any state government in Nigeria” and urged the people to safeguard it as one of the star legacies of his administration.

With the completion of the project, the commissioner for Environment and Sold Minerals, Sir Charles Udoh, explained that the entire swath of land hitherto enmeshed in flood and erosion crises around Atan Offot and the adjoining communities has been relieved of the burden of flood threat during heavy downpours.

The paramount ruler of Uyo, Edidem Sylvanus Okon, commended the governor for “taking away the burden of several years from my people”, noting that “as the problem has been addressed, many people in my domain, who fled the raging floods, would return to salvage their properties and rebuild their homes.”

The youth leader of the area, Comrade Godwin Okpo recalled the pains many residents went through before the intervention by the government, adding that “several houses had been submerged, people swept away and several of the residents relocated.

“We commend the state government and the World Bank for collaborating to execute this project to ease the pains of several years borne by the people. With this, socio-economic lives will return to the affected areas as those relocated will return.”

In the same vein, reclamation work on the long-abandoned Urua Ekpa erosion-ravaged sites has commenced and governor Udom has assured that the multi-million-naira project, contracted by Benest Engineering Limited, would be completed before the end of the end of his administration next year.

Hon. Emem Edukere, supervising the job for the Managing Director (MD), Elder Benjamin Udobia, assured that “the project will be completed in record time. We are working even under the rain to ensure that we beat the time and deliver it for the governor to inaugurate it because this project is very dear to him as part of his completion agenda.”

More so, excitement flowed in torrents from the local residents who lamented that over the years, no fewer than four persons have lost their lives, forcing them to abandon the large expanse of land and hundreds of submerged buildings due to the ravaging floods.

A resident of the area, Mr Ukeme Ibanga recalled that the flood had been dealing with them since the 1990s and became more terrible five years ago.

Ibanga praised Governor Udom for the intervention work adding that four lives had been lost to floods in the area. He identified the dead to include “a pregnant woman, a child and two others.”

According to him, “for the past ten years, no vehicle has plied any road around these affected areas”, stressing that “when it rains heavily, my house always gets flooded and I would have to move my family to the village till the water dries up.” He revealed that the reconstruction work started only two months ago.

Another resident, a widow, Mrs  Nkoyo Godwin told LEADERSHIP Weekend that she had been badly affected by the flood with her “house and household properties washed away.

“I lost my shop to the flood and all the wares. Most people had since packed and relocated to other places, and some who had no serious means of livelihood had no other option than to move back to their villages in Ibiono Ibom, Eket, Itu, Ibesikpo Asutan, Uruan, Nsit Atai, and other LGAs”.

Also, a distraught resident of Asutan Street, heavily eaten by gully erosion, Mrs Christina Aaron, bemoaned her plight, lamenting that “the flood that ravaged this area and this year have seriously impacted on properties, as many houses are on verge of caving-in into the deep gully created as a result of years of torrential rains.

“The stagnant water the pit burrowed by the erosion menace affects my health and my children, and some dangerous reptiles including snakes roam around this area.” She added that “I always use bitter kola to scare them away from the house.”

Urging the Government to also extend the flood intervention work to Asutan Street, Mrs Aeron, recalled that the commissioner for Environment and Sold Minerals, Sir Charles Udoh, came to inspect the site during a heavy landslide that threatened the foundations of many houses after some children escaped being swallowed in the collapsing gullies.

“When the incident happened, the commissioner came and gave us hope that the problem would be fixed. He warned us to relocate so intervention work could be done, but since last year that he came, we have not heard from him again and the deep gully keeps expanding every day and inching towards swallowing our homes. We don’t have anywhere to relocate to, let the government come and relocate us to safer areas,” she pleaded.

Tales Of Woe As Flood Kills 7, Displaces Thousands In Kwara