Several days after owners of the 42 lock-up shops recently razed at the business centre of Abubakar Tafawa Balewa University (ATBU) in Bauchi State are still counting their losses as tears still flow freely from the eyes of the victims, Kamal Ibrahim writes. 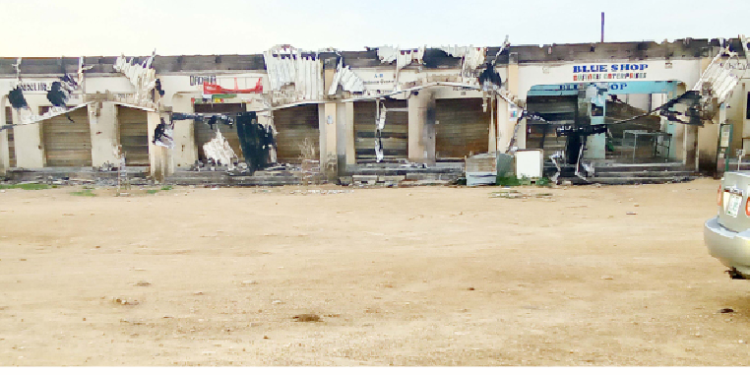 A devastating inferno recently paid an  visit to traders at the business centre of the popular Abubakar Tafawa Balewa University ATBU, throwing the victims into confusion, pain and anguish.

Recall that tragedy struck on Thursday morning when fire razed not less than 42 lock-up shops at the varsity’s students  business centre. The affected shops  were located on Block D, of the centre comprising mainly computer operators, barbing salons and provision stores, provision stores, commercial printing, cyber café, and restaurant among others.

It was gathered from multiple sources within the university that no fire service was available to help save the situation.

The fire outbreak which is said to be the first of its kind in the university business community, reportedly started at 2:00 am . It was allegedly triggered by electrical fault.

Sadly, while the affected traders are counting their loses and ruing what had happened to them, it was a different kettle of fish for scavengers who were busy picking up the metal left at the wake of the fire for sale.

One of the affected traders, Mrs. Godwin, a widow with three children, said she did not know where to pick up her pieces of life from. She called on government and individuals to come to her aide LEADERSHIP Weekend gathered that the mini market was constructed five years ago by the school management. Both sympathizers and victims, who have described the incident as a painful have appealed to government and well-meaning Nigerians to assist them so that they can come back to their businesses. They said, “If government and every good individual should come to their rescue as they need to start a new source of livelihood.

Narrating his ordeal, Alfred Joseph, a computer operator whose shop was burnt beyond recognition said,

“I am not currently in Bauchi, I travelled to Abuja and a friend called me this morning to inform me about  the incident. He told me that everything in my shop has been completely burnt down.

“All my properties including photocopiers, computers, laptop, printers, stationeries, my generator and everything were destroyed. It’s so unfortunate,” he said.

Alfred, however blamed ASUU strike for their calamity. He said, had the university been in session and students on campus, the inferno would have been avoided. He said, after everything, he argued that it is hectic to start a printing business all over again after taking six years to nurture the business.

He said, ‘Losing a business that I have taken my time to build from the scratch for over six years is actually very painful and heartbreaking.

LEADERSHIP gathered that some of the shop owners are mostly breadwinners of their families and students who graduated from the institution and later resorted to opening businesses after graduation. To such people, life without the venture on which they depend is meaningless.

Another victim, Audu Musa who rushed to the centre as early as at 7:30 am said he met section in a total mess as they couldn’t salvage their property.

He said he was informed that the fire was caused by an electrical fault, “and I was also told that all efforts to get the fire service to come proved abortive; by the time I got there later in the morning, I discovered that all the shops were burnt down.”

Hosea , another shop owner  added that, “I run a computer business centre and IT solution. I lost everything, ranging from computers, printers, furniture, generator, POS machines and a lot of things.”

Speaking further, he said he “graduated in 2016 from the Civil Engineering Department but since I didn’t get any work to do, I decided to start this business, although I’ve been doing this even while I was a student in the school’s hostel. So, when I graduated, I expanded the business so I can use it to support myself and the people around me.

Sources told LEADERSHIP Weekend that the institution’s firefighting truck could not  the situation  because it was not  in a good working condition.  They are requesting the school authority to cry to the state government and  explain that the extent of damage was not something they could solve alone.

Another victim who disclosed that his blood pressure was presently high said, “I just stocked my shop  with goods worth about N4 million, They called us about 3;12 am that the market was on fire and before I got here, everything had been burnt. The money  I used to buy the goods was borrowed and I do not know where I am going to start from again,” he lamented.

One of the victims said, “We also contacted the Federal Fire Service but they said their truck  tyres were in bad shape.

In fact, all the victims interviewed said they lost millions of naira, some in hundreds having replenished their stock in anticipation of an end to ASUU strike before the fire incident occurred.

The spokesperson of Bauchi Fire Service, Muhammad Tijjani Bature and confirmed that the fire incident to LEADERSHIP Weekend..

All efforts to speak with the school’s management proved abortive.

A source at the Office of the vice-chancellor of the university told our correspondent that a committee has been set up to find out the remote and immediate cause of the incident.

How We Separated Conjoined Twins At UITH - Odeiga