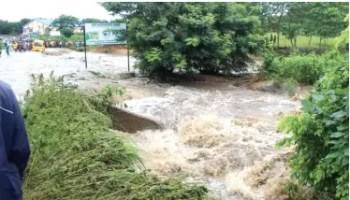 Market women in Lagos, led by the Iyaloja General of Nigeria, Folashade Tinubu-Ojo has sympathized with Victims of floods ravaging different parts of the country.

Tinubu-Ojo, daughter of Bola Tinubu, the presidential candidate of the All Progressives Congress was especially sympathetic to flood victims states along River Niger and Benue, where many villages and town have been sacked by the floods.

A statement signed by Oke Oseh, the director of administration, IGNNO said Tinubu-Ojo wass deeply saddened to learn of the flood disasters in Kanti Kwari market in Kano City in kano and Lokoja, Kogi State.

Tinubu-Ojo extended her heartfelt sympathy to the governor of both states, His Excellency Gov. Abdullahi Ganduge and his counterpart Governor Yahaya Bello and the good people of both states over the devastating flood incident that affected many in both states respectively.

The leader of market women, according to the statement was especially sympathetic to people who make their livelihoods in the markets, particularly the market men and women who are working hard to meets their daily obligations.

Tinubu-Ojo was quoted as saying, “I am very distressed at the manner of the flood on these hardworking citizens who have contributed immensely to the economy of kano and Kogi State in particular and Nigeria in general”.

Iyaloja, prays for all the victims of the incident and divine comfort to those affected.