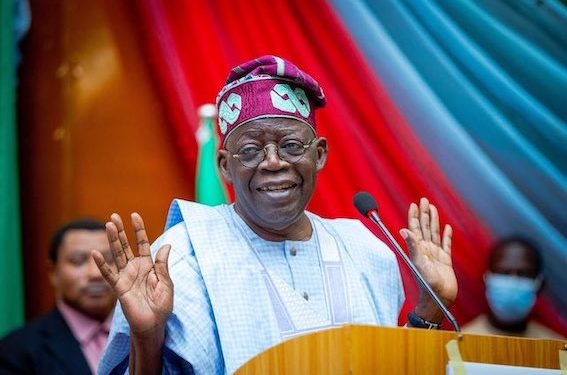 The group said the All Progressives Congress (APC) presidential ticket is an attempt to give President Buhari a third term in office.

Chairman of the group, Hon. (Dr) Rufus Omeire, also expressed surprise at the recent efforts by a former APC national chairman and ex-Edo State governor, Comrade Adams Oshiomole, to distance the APC presidential candidate from the Buhari’s government, saying “this is most disingenuous for many reasons”.

According to the group, “The APC Presidential ticket for 2023 general elections is an attempt to give President Muhammadu Buhari a third term in office.

“Recently, a former APC Chairman and ex-Edo State Governor, Comrade Adams Oshiomole, sought to distance Asiwaju Ahmed Tinubu, the APC Presidential candidate, from the disastrous government of the incumbent President, General Muhammadu Buhari.This is most disingenuous for many reasons.

“In the first place, by the provisions of the Constitution of Nigeria, it is a political party that sponsors a candidate for Presidential election. In this case, Tinubu is being sponsored by the ruling APC.

“Secondly, for practical reasons, it is the name of the political party that will be on the Independent National Electoral Commission (INEC)’s ballot paper during elections and so, APC will be on the ballot, not even Tinubu.

“Thirdly, Tinubu is the acknowledged and recognised National Leader of the APC, a position he shares with President Buhari. Indeed, by Tinubu’s own admission, he was largely instrumental in foisting President Buhari on Nigeria.

“He has given crucial support to the APC government of President Buhari and repeatedly publicly praised the policies and direction of the APC government. He is the philosopher king of APC’s misrule in Nigeria.

“Fourthly, during the APC primaries, he was massively endorsed by the party to continue from where Buhari will stop. The word in the APC is continuity.

“The fulcrum of the APC campaign has been a firm promise to replicate the sterling performance of the APC government of Buhari, if Tinubu happens to win in 2023.

“Make no mistake about it, a Tinubu presidency would be just another term for Buhari. Note that Tinubu and Buhari have the same divisive streak, the same arrogance and contempt for peoples’ views and feelings.

“Tinubu is even a worse version, as Buhari at least, resisted the divisive Muslim – Muslim ticket in 2015. “Notwithstanding, they subscribe to the same policies and programmes. Tinubu is Buhari and Buhari is Tinubu”, the group argued.

The PDP Action 2023 pointed out that APC, manifestly, now represents a clear and present danger to the security, stability and economic wellbeing of Nigeria.

The APC, the group said, represents an existential threat to Nigeria in all critical areas, stressing that Nigerians are scandalized at the ineptitude, incompetence and insensitivity of the Buharu-Tinubu -APC government.

The PDP Action 2023 therefore urged Nigerians to reject APC in the next year’s general elections and give the reformed PDP the opportunity to rescue and rebuild the nation from the abyss the ruling party has plunged Nigeria into.

The group further appealed to Nigerians to avoid splitting their votes across the PDP, Labour Party (LP) and New Nigeria People’s Party (NNPP) at the 2023 presidential polls, warning that doing so will only return APC to power to continue their plunder of the nation’s resources and threat to Nigeria’s corporate existence.

“Although APC has the constitutional right to campaign, but Nigerians, under normal circumstances, should be wary of listening to the lies of APC that are repackaging Tinubu to wear a new face as they did with Buhari in 2015. What will they tell us? The same lies  they told us 7 years ago.?

“How can a responsible government leave her children to be out of school for six months with no realistic option of addressing the problems?

“How can the Buhari – Tinubu government fold their hands and watch Nigerians slaughtered on a daily basis with only occasional meaningless and ineffective directives from Buhari and Garba Shehu?

“How can the APC government allow the Naira to reach N710 to the dollar with no visible rescue attempt?

“Can a responsible government allow prices of food and other goods and services to go beyond the reach of Nigerians without any realistic attempt at solutions?

“Should the APC be allowed to continue mismanaging our oil resources which now sells above $100?

“Should Nigerians continue with an APC administration that allows the organised theft of over 70% of our Oil production?

“Should we enthrone the Tinubu presidency to continue with the scourge of unemployment of our teeming youths (acclaimed to be one of the highest in the World)?

“Should we enthrone another APC government in 2023 to continue to keep Nigeria as the poverty capital of the world?

“Nigerians should say a resounding No to APC in 2023 for these reasons and give the reformed PDP the opportunity to rescue and rebuild the nation from the abyss the APC has plunged Nigeria into.

“Furthermore, Nigerians must guard against splitting their votes across the PDP, Labour Party (LP) and New Nigeria People’s Party (NNPP)  at the 2023 presidential polls, as doing so will only return APC to power to continue their plunder of the nation’s resources and threat to Nigeria’s corporate existence”, the group counselled.