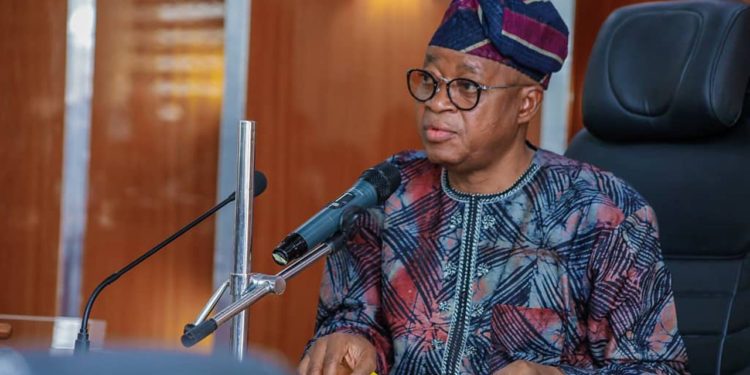 Second term ambition of Osun State governor, Adegboyega Oyetola and All Progressives Congress (APC) candidate, got a boost yesterday as the Ogunsua of Modakeke, Oba Joseph Olubiyi Toriola and the Apetumodu of Iperumodu, Oba Olugbenga Joseph Oloyede, described him as a game changer whose ingenuity in both private and public sectors had helped to transform the state.

The traditional rulers stated this when the governor’s campaign train  moved to Modakeke in the Ife-East Area Office and Ife-North Local Government Area of the state.

The monarchs said the governor’s  good works have endeared many to him, particularly the traditional rulers who have benefited tremendously from his purposeful leadership and good governance.

They said their subjects are resolute to get him re-elected come July 16 governorship election in the state.

This is even as over 300 members of the  Peoples Democratic Party (PDP) pitched tent with APC in Modakeke.

Speaking in his palace, Ogunsua of Modakeke, Oba Joseph Olubiyi Toriola, applauded Oyetola’s monumental achievements in the last three and a half years, saying his good record has surpassed their expectations.

Oba Toriola, who acknowledged some of the tremendous achievements the state has witnessed particularly in Modakeke and its environs, promised that his subjects will reciprocate the governor’s good gesture and re-elect him for a second term.

Oba Oloyede who spoke on behalf of other traditional rulers in Ife-North Local Government Area assured their readiness to ensure the re-election of the Governor.

Basiru who reeled out some of the monumental achievements of the Governor said his return would go a long way to consolidate on his good works.