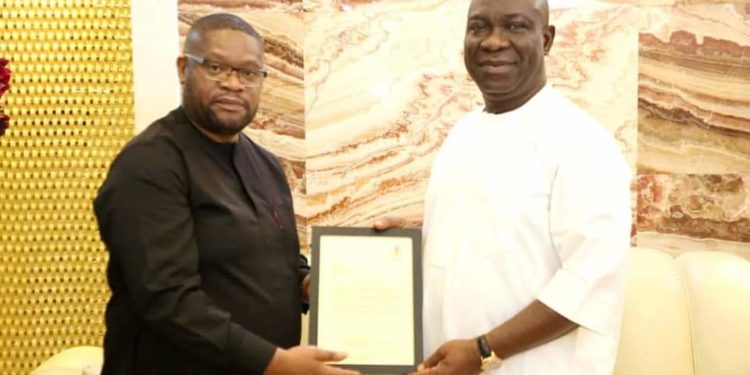 The University of Lincoln, United Kingdom, has appointed a former Deputy President of the Senate, Senator Ike Ekweremadu, a Visiting Professor of Corporate Governance and International Linkages.

According to a statement by the media adviser to the former Deputy Senate President, Uche Anichukwu, he said the appointment was conveyed in a letter dated May 26, 2022 and signed by the Deputy Vice Chancellor of the university, Professor Andrew Hunter.

The appointment letter was presented to Ekweremadu in Abuja on Sunday by the Head of International, Lincoln Business School, Professor David Rugara, on behalf of the Pro-Vice Chancellor of the School, Dr. Craig Marsh.

The letter by Prof. Hunter reads in part: “I am delighted to inform you, on the recommendation of the Lincoln International Business School, that the Professorial Committee has agreed to confer on you the title of Visiting Professor of Corporate Governance and International Linkages from May 2022 to May 2025.

“A Visiting Professorship is one which is awarded to distinguished individual of recognised academic and/or professional standing, whose association with a department of the university will support its academic endeavour and provide the highest source of advice and wise counsel in that discipline.

“I would like to take this opportunity to welcome you to our academic community and thank you for your willingness to be associated with the University of Lincoln.”

Accepting the appointment, Ekweremadu said he was proud to be associated with the academic pedigree and core concept of the University of Lincoln and pledged to go to work in earnest.

“A call to render any service in the educational sector is a call to serve humanity and I am always highly appreciative of it.

“I do hope that this is just the beginning of our relationship; and I equally hope that more opportunities will come for more Nigerians to play role in increasing the academic activities of the university in Nigeria and beyond,” Ekweremadu stated.

It will be recalled that Ekweremadu was also appointed a Professor and Mentoring Scholar of E-Governance and Strategic Government Studies by the Southern University, Baton Rouge, Louisiana, USA, in 2018.

A fifth-term Senator, who served as Deputy President of the Nigerian Senate for three terms, and former Speaker of the Parliament of the Economic Community of West African States (ECOWAS Parliament), Ekweremadu holds a Doctorate degree in Constitutional Law.

He taught Constitutional Law and Labour Law at his alma mater, the University of Nigeria, Nsukka, from 1991 until 1997 when he joined active politics and was elected the pioneer chairman of Aninri local government area of Enugu State.

Ekweremadu has also delivered over 29 public lecturers, mainly on the subjects of good governance, constitution making, and federalism at both local and international fora such as the Osgood Hall Law School, York University, Ontario, Canada; Johns Hopkins University, Washington DC, USA; Parliament of the United Kingdom as well as several Commonwealth and ECOWAS fora.

Also, personally reacting to the appointment, Ekweremadu, who took to his verified Facebook page on Sunday evening, wrote: “It was a pleasure and an honour to receive a letter of appointment by the University of Lincoln, UK, as Visiting Professor of Corporate and International Linkages.