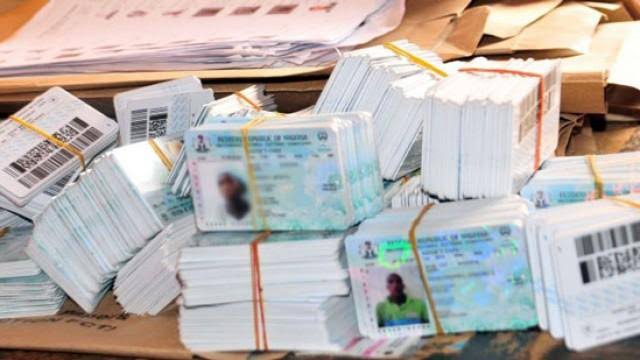 The ZLP national chairman, Chief Dan Nwanyanwu, who lamented the unearthing of PVCs buried in some states, added that INEC staff may have connived with some politicians to cart away PVCs with to perpetrate electoral fraud in 2023.
Nwanyanwu who stated this at a press conference yesterday while reacting to a consignment of dumped PVCs seen in a viral video recently, said upon realising that the Bimodal Voter Accreditation System (BVAS) has rendered such plot futile, those behind the criminal intent quickly dumped the PVCs.
He said: “We are calling on the Inspector General of Police and the DG, DSS not to pass this page as if nothing has happened. This thing went on in so many states and it is easy for you to find out.
“We want to make some intervention on the issue of last week, where some PVCs were seen in gutters, in unusual places. We made inquiries on what happened, we sent our intel and we have gotten the first report of what transpired.
“But let me make it clear: the truth is that some bags of PVCs found their way to unusual places. They were moved to those places by Nigerians, not by spirits.
“The first information we got was that politicians in the past had acquired these PVCs from the three states of Imo, Lagos and Rivers. They gathered the PVCs believing that it would be business as usual.”
Nwanyanwu said the old system of accreditation of voters was through the card reader and “there was a leeway where the card reader was unable to identify you to vote, you could vote with the incidence form.
“In the 2015 and 2019 elections, most people voted through the use of the incidence forms.
hand you could mop up PVCs and give it to anybody. Once the card reader failed, you use the incidence forms and vote.

“But with the new system of BVAS, unless you pass through BVAS, you are not going to vote. So those unscrupulous politicians have come to the reality that those PVCs are just like toilet papers. What they did was just to go and dump them away,” he added.

He called on INEC to look within its ranks, saying, “when PVCs are printed, they are moved to the state of origin where the citizens registered. From the state, they move it to the local government. And from there, somebody has to be responsible. That person should explain how the PVCs left his office.”

He continued: “In the course of our investigation, we found out that in one of the INEC offices, early in the morning, they saw bags of PVCs thrown into the compound. The security man was asked, he said when the people were throwing it in, they said ‘useless people, carry your thing.’ On the other hand, this is because of BVAS, no more incidence form.

“Our worry is that, the efforts we have made as political parties in the partnership with INEC leadership to arrive at this point, there are still politicians who want to thwart these efforts we have put in for years. They don’t want a free and fair election, they don’t want a free and fair process, they still believe that they can carry ballot boxes, they can manipulate figures, arrive at a solution, their own solution other than what Nigerians decided at the polling units. That is why the Inspector General of Police and the DG, DSS should not overlook this matter.”

He called on politicians to play by the rules, noting that resources expended to deepen the electioneering process should not be jeopardized.

“We have a system now that is sweet and Nigerians are commending it. We have just left Osun, the other time it was Ekiti. You can see improvements after every election and we are confident that by the time we get to 2023, at least, the votes will count and will be counted,” he stressed.