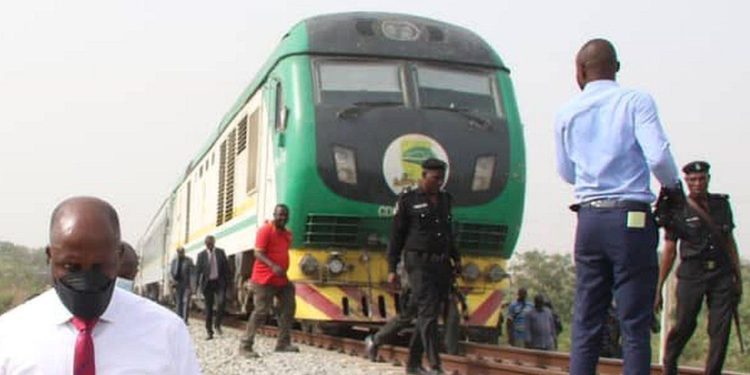 When some train passengers boarded the 6 pm Abuja Kaduna train on March 28, they had no inkling of what would happen. Some had business appointments, some were just going for the weekend in Kaduna while some were going to visit friends and family.

Not many of them thought it would be their last train ride or they would undergo their worst traumatic experience.

Sadly, that night, gunmen blew up the rail track, killing some and abducting scores of passengers.

So far, the bandits have released some passengers in four batches. Last week seven passengers were released.

The victims were released on Wednesday morning after spending 135 days in the custody of the terrorists.

The father of the four kids, Abubakar, is the son of a former Military Administrator of Kano and Benue States, to Mamu, Major General Chris Garba, and also a staff of the National Assembly Commission.

The terrorists also released a 60-year-old woman, Hajia Aisha Hassan who was said to have been freed due to life-threatening health challenges that deteriorated recently.

So far, 42 victims have regained their freedom. The number of those still in captivity now stands at 35.

President Muhammadu Buhari Thursday in Abuja met with representatives of victims of the Kaduna Train abduction, assuring them that the Federal Government is doing everything within its powers to ensure the safe return of the remaining captives.

Condoling the families of the victims and those who lost their loved ones, the President said since the “terrible and cowardly attack by the criminal elements” on  March 28, 2022, the nation had joined them to endure a period of difficulty and emotional pains.

The President told representatives of the families that in the immediate aftermath of the incident several actions have been taken by the government to bring succor to the affected families and to prevent a recurrence in the country.

He also explained his reason for discarding the use of lethal military force in extracting the remaining abductees.

‘‘I have been informed that at last count, there remain about 31 people in the hands of the kidnappers, and we determine to work towards returning these 31 people to their families.

‘‘It is understandable that emotions typically run high, we have received several suggestions about the deployment of lethal military force in extracting those still being held in captivity.

This option has indeed been considered and evaluated.

‘‘However, the condition to guarantee a successful outcome and minimize potential collateral damage could not be assured, and therefore that course of action had to be reluctantly discarded.

‘’My primary concern is to get everyone released safe and unhurt,’’ he said.

In his remarks, the Minister of Transportation, Jaji Sambo, said in the first week of his resumption in the ministry, he met with the relatives of the victims of the Kaduna train attack, updating them on all the efforts the government is making to ensure the safe return of their loved ones.

He described the audience with the President as a manifestation of the efforts by this administration to secure the release of all captives and proof that the ‘‘government is not resting on its oars.’’

A representative of the victims of the train abduction,  Alhaji Sabiu Mohammed, appealed to the Federal Government to assist the families in the release of their remaining loved ones still in captivity.