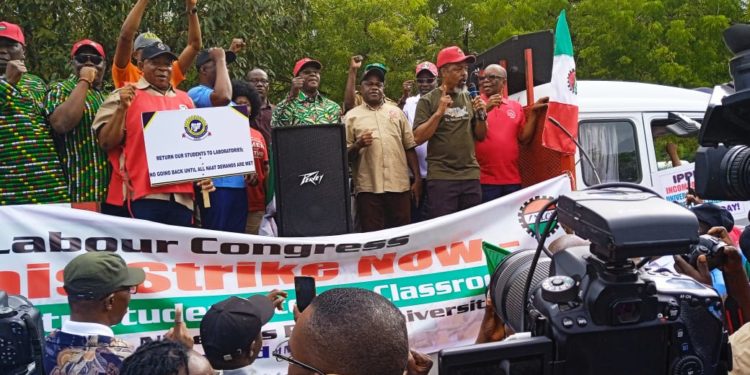 The Nigeria Labour Congress (NLC) and all its affiliate Unions, on Wednesday morning, commenced the megal rally to end its two-day nationwide solidarity protest.

The protest was aimed at impressing the federal government to resolve all demands by the university based unions.

Adressing workers at the Unity Fountain in Abuja on Wednesday, NLC national president, Comrade Ayuba Wabba, insisted that the congress wouldn’t relent in its effort until federal government resolves all lingering issues with the university workers.

He said, “No justification for this situation, if the government is not ready to resolve the issues, we are not going to be tired, we must be angry because this is not what we bargained for in electing our leaders.

“This is just the beginning, you must be ready to salvage the education sector, we are tired of government antics and we must take our destiny in our hands.

“They said we are security threat but their action is a threat to democracy, we are reseting the country to ensure that our leaders do the right thing.

“We commend the governors who came out to talk yesterday, we want solutions and we want the issue to be solved, we will not allow few elite to destroy the future of Nigeria children,” he added.