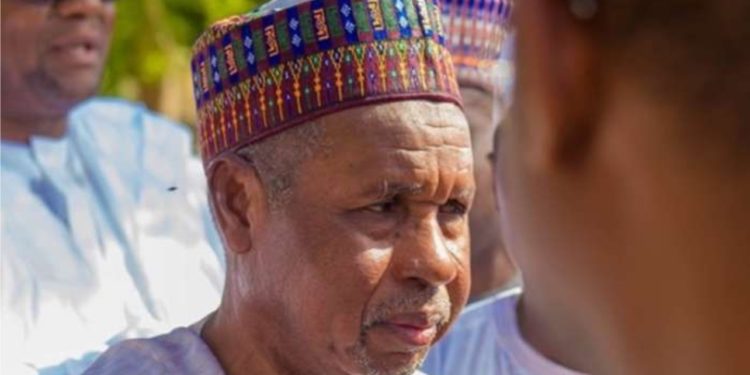 Katsina State governor, Aminu Bello Masari, has reaffirmed his position on the call for residents of the state to take up arms and defend themselves against terrorists raiding their communities.

The governor argued that the government alone can’t provide security for the people in a state like Katsina that has only 5,000 policemen, and just 30 deployed to some local government areas with only ten rifles.

In an exclusive interview with LEADERSHIP Sunday, Masari said he was not shifting ground on his earlier stance that the citizens should acquire arms for self-defence because it would require the collective efforts of government and the people in the fight against crime and criminality in the state and nation at large.

He noted that the call for self-defence should not be interpreted to mean both the state and the government at the centre is abdicating their responsibility.

Instead, he said it is an indication that the government is adhesive to its role of providing quality leadership and protection of lives and properties of its citizens, hence the need to teach and train the people for self-protection.

The government explained: “People fail to understand that when we say protection of lives and properties is the responsibility of the government, it entails the government teaching and training people on how to keep out of danger, including keeping oneself armed. Self-protection is naturally instinctive

“I’m sure that now if somebody comes to slap you, the first thing you will do is fend off that, and if you can, also pay him back. So the issue of self-defence is necessary. For instance, when you hear somebody trying to break your door, what will you do? Call the police who are two or three kilometres away from your house so that before the police arrive, this man would have come and killed you.  And again, you also look at our circumstances. How many policemen do we have in Nigeria? I assure you in Katsina we don’t have up to 5,000 policemen.

“There are some local governments with 30 policemen with 10 guns, not all the 10 guns are AK47. Now, even if you have five thousand, we are projecting a population of 8 million, are you sending one policeman to 200,000 people? How many militaries do you have, the military combined with the air force, are they up to 200,000?

“Are they not in 36 states plus Abuja? They are so thin that until we have the numbers and the equipment, we have to do something. That’s why I said we are training vigilantes to add to what is on ground with regards to police and NSCDC. So security is everybody’s business. Everybody has a role to play; the government is providing leadership, not abdicating leadership, by calling for self-defence.”

Masari disagreed with those calling on the government to hire mercenaries, suggesting however that the best option is to seek technical advice from countries with more experience in the terrorism war.

He stated: “I think any country will say it wants mercenaries on its own because historically, when they come, they leave behind their own footprints.

“But we can do with technical advice because there may be some countries or some people who have more experience in this kind of warfare with the insurgents and bandits. So leveraging the experience of others as a country or as a group is very advantageous because we learn. So, to that extent, if you say the government should seek technical advice and technical assistance from sources that are viable.”

He disagreed that Nigeria’s economy is terrible, even as he identified the COVID-19 pandemic, the war in Ukraine and banditry as the major causes for the rising cost of living, which he said is a global threat.

He stated: “It is an international thing; it is all over the world. How much does a litre of fuel sell now in America, Europe, Ghana or Niger Republic? These are countries where we share almost everything. It costs more than four times the price in these countries.

“Inflation is as a result of COVID-19 and now the Russian-Ukrainian war has affected the supply of many essential items, prices have been increased. Can Nigeria be an exclusion from that? You talk about banditry and insurgency. It has been at least very close to us in Chad, Sudan, Mali, Burkina Faso, and the even Niger Republic. When did it stop? We are not experiencing anything alien, but yes, it’s new to us. We were hearing it before, now it is with us.

“You know, how many countries went into recession? Nigeria went into recession about two or three times and came out in weeks. Many countries whose economy depends on one source like ours collapsed, but we have not. Nigeria is suffering from whatever is happening all over the world. It could have been worse with the crash in the price of crude oil which at some point was between 100 to $140 before crashing point to $30. At ASUU, the federal government is not relaxing. Industrial action is part of the freedom of association that Nigerians are enjoying. Nigerians are enjoying this freedom to strike but in other countries, they dare not.

“It will not. It will reinforce the party because people like you who understand know that nobody could have done better than us in APC, given the resources available, the international dynamics of the economy, given the fact that some of the issues we are dealing with were not a creation of Nigeria, not even Africa, but international.

“Today, most of the equipment has become outdated. Now, the country that is exporting crude is importing refined products. That is why we could not even benefit from the high price of oil.

“In addition, I want you to remember that there was a time within more than seven years of the Buhari administration when the production fell to 500 barrels because of militancy and theft in the Niger Delta and yet the country did not collapse.

“And I think this government, the APC government, should be celebrated because we inherit the problem that we did not create and we confronted them with whatever arsenal at our disposal, and we are still able to keep the country together”.