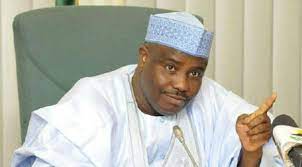 Governors under the aegis of the Nigeria Governors Forum(NGF) have come down hard on the government of President Muhammadu Buhari over claims they are responsible for rising poverty in the country.
They however however failed to mention the president by name focusing instead on the minister of state for budget and national planning , Clement Agba in their counter offensive against the claims states are responsible for the rising poverty rate.

In a veiled attack on the president, they accused of failing to protect rural farmers from bandits and presiding over a government where the NNPC has not remitted money to the federation account in months.
LEADERSHIP Sunday recalls that the National Bureau of Statistics recently disclosed that 133 million Nigerians are poor.
The president in recent days has earned the ire of the governors accusing them of siphoning local government funds and mismanaging the 13 percent derivation given to oil producing states.

The president’s criticism came after his minister levelled similar accusations on the governor for failing to invest in rural communities.
According to the governors, the minister got it totally wrong adding that his attacks on the governors was totally unnecessary.

In a statement by the spokesman of the NGF, Abdulrazaque Bello- Barkindo, the governors said rather, it was the federal government that has abandoned its promise and primary responsibility to the citizens.
Describing the minister’s assertions as diversionary, governors said its the responsibility of the federal government to provide security for the citizens .

The governors said its because of the worsening insecurity that people in the rural areas abandoned their farms .
The governors said “the tirade early this week by the minister of state for budget and national planning, Clement Agba, on the 36 governors, where he blamed them for the rising poverty index in the country comes to the Nigeria Governors’ Forum as a surprise. The Minister got his message totally wrong.
“His attacks are not only unnecessary, but they represent a brazen descent into selective amnesia. It is also diversionary as far as the governors are concerned.

“The minister who should be responding to a question demanding to know what he and his colleague, the minister of finance, budget and national planning, Zainab Ahmed were doing to ameliorate the hardship Nigerians are facing, attempted to defray the notion that rising levels of hunger and lack were peculiar to Nigeria.
“True as that may be Mr. Agba went further to explain that their government, through many of its social security programs, has been dedicating resources to alleviating hardship, and then goes further to accuse state governors of misdirecting resources to projects that have no impact on the people.

“While rightly pointing out that that 72% of the poverty in Nigeria is found in the rural areas, the minister said that the rural populace had been abandoned by governors.
“This assertion is not only preposterous and without any empirical basis, but also very far from the truth. It is Mr. Clement Agba’s veiled and deliberate effort, as a minister, to protect his paymasters and politicize very critical issues of national importance.

“Instead of answering the question thrown at him by journalists, Mr. Agba veered his attention to soft targets that happen to be 36 governors.
“It is the opinion of the governors that the dereliction that the minister is talking about lies, strictly speaking, at the doorstep of the federal government, which he represents in this scenario.
“First and foremost, the primary duty of any government is to ensure the security of lives and property, without which no sensible human activity takes place.

“But the federal government, which is responsible for the security of lives and property has been unable to fulfil this covenant with the people; thus allowing bandits, insurgents, and kidnappers to turn the country into a killing field, maiming and abducting people, in schools market squares and even on their farmlands.
“This dereliction of duty from the center is the main reason why people have been unable to engage in regular agrarian activity and in commerce. Today, rural areas are insecure, markets are unsafe, surety of travels are improbable and life for the common people generally is harsh and brutish.

“The question is, how can a defenceless rural population maintain a sustainable lifestyle of peace and harmony when their lives are cut prematurely, and they wallow permanently in danger?
“How does a minister whose government has been unable to ensure security, law and order have the temerity to blame governors?
Two states, Edo State and Akwa Ibom State had promptly responded to the vituperations of the minister.
“According to Akwa Ibom State, what determines poverty and unemployment in a country is its economic policy, which is set, normally by the central government nationally.

“Akwa Ibom insists that the federal government cannot abdicate its responsibility by blaming states and goes further to ask, albeit rhetorically, how economic policies in a state drive the dollar which determines almost every aspect of our national existence.

“In its response to Clement Agba, Edo State, on the other hand, reeled out the projects the state embarked upon which were targeted at alleviating poverty among its people.
“Mr. Agba is perceptibly oblivious of them. Many other states have been implementing pro-poor programs in their domain, and they are there for all to see,”
The governors further said although the minister committed the folly of tarring all thirty-six governors with the same brush, there cannot be a one-size-fits all reply to the Minister’s misguided outburst.
For example, they said it is the federal government that, in its campaign message in 2019, promised to take 100 million Nigerians out of poverty.
Today, the governors noted that records show that more than 130 million Nigerians are living below the globally accepted poverty line of a dollar a day.
The governors further stated that under the current administration that Mr. Clement Agba is minister, the national cash cow, the NNPC, had failed to remit statutory allocations to states in several months.
According to the governors , the situation had compelled governors to rely on other sources of revenue like, the SFTAS program and other interventions anchored by the NGF, to fund states activities while monies budgeted for such federal ministries as Agriculture, Rural Development and Humanitarian Affairs are not being deployed in the direction of the people.
“So, where is the Minister getting his unverified facts and figures from? It is important to mention here that only this week the House of Representatives asked the Minister of Humanitarian Affairs, Hajiya Sadiya Umar Farouk, to quit office if she was not ready to do her work of alleviating poverty in the land.
“This, in other words, is a resounding vote of no confidence on the ministers among whom Mr. Agba serves.
The governors stressed that it does not indulge in joining issues with the Federal Executive Council, being a non-partisan organ.
They aver that NGF’s primary mandate is to partner with all well-meaning institutions, concerns, MDAs, and individuals for the progress of the Nigerian people.
However, the governors said it is important to put on record the progress made by state governors in the administration of their states, which have witnessed tremendous progress in recent time.
“Governors have undertaken projects where they, in conjunction with their people, deem them fit for purpose. Governors have today shown greater responsiveness to the yearnings and aspirations of their people, and these vary from one state to another.
The opinion, therefore, of one minister, based on a survey of 56 000 households in a country of 200million people can never diminish the good work that 36 pro-poor minded Governors are doing for this country.
Finally, it is important to admonish top government functionaries like Clement Agba that the Nigerian people deserve answers from even those who are appointed to serve them and these finger-pointing invectives on soft targets do not help matters, only answers do” the governors said .

We Don’t Touch LG Funds, Says Akeredolu
Ondo State governor, Oluwarotimi Akeredolu, has dissociated himself from state governors alleged to be stealing local government funds, even as he confirmed the receipt of 13 per cent oil derivation, subsidy and SURE-P refunds from the Federation Account in the last two years (2021-2022).
The governor in a statement signed by his chief press secretary, Richard Olatunde, explained that the refunds received by the state were expended on capital projects and payment of accumulated salary arrears.
On the allegation that some Governors are stealing Local Government Funds, the statement noted that the

Akeredolu administration has not touched funds meant for Local Governments since its inception.
“As a matter of policy, monies meant for Local Governments are shared at their monthly Joint Account Allocation Committee (JAAC). Mr. Governor doesn’t touch local governments’ funds. The local government Chairmen can attest to the fact that they have total freedom in the management of their funds,” the statement added
According to the statement, the refunds received from the federal government were judiciously expended on some key capital projects across the three senatorial districts of the state.

“Recently, the Governor commenced the rehabilitation of over 35 kilometers of a network of roads in Akure, the state capital. The roads being rehabilitated are the existing ones built by past governments several years ago and which are already in bad shape with potholes and failed sections. The 9.5km Emure- Iporo Road and rehabilitation of the 15.2km Akure phase “D” road networks have all begun.

“The 10km Okitipupa-Igbokoda virgin road which will be commissioned by the Lagos State Governor, Mr.Babajide Sanwo-Olu, is another evidence of Governor Akeredolu’s commitment to infrastructural development. These intensive capital projects are financed from these refunds and Internally Generated Revenue.
“The monthly FAAC receipts are devoted to the payment of salaries and pensions as agreed by Labour Leaders at the monthly meetings presided over by the Head of Service and Chairman of the Joint Negotiating Council (JNC).’’