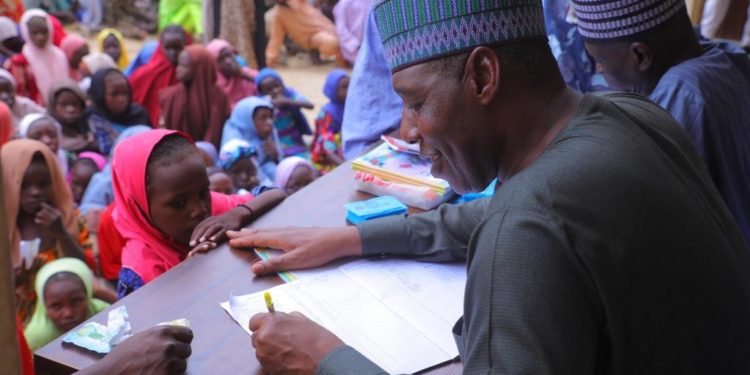 Borno State governor, Professor Babagana Umara Zulum, traveled to Monguno on Sunday, where he led the enrolment of 4,229 school-aged children, including orphans, whose parents were killed during the Boko Haram insurgency in parts of Northern Borno.

The exercise which led to the enrolment of 4,229 children on the first day, targets 7,000 children by the end of this Monday, under the first phase.

The children, aged between six and 13 years were enroled into primary and junior secondary schools, depending on their academic statuses before they were displaced by insurgents from communities in Monguno, Kukawa, Guzamala and Marte local government areas of northern Borno.

After numerous attacks on communities in the LGAs since 2014, residents including thousands of children escaped to Monguno town to live in IDP camps for years, with many children missing school as a result.

“Today we are here in Monguno for only one purpose, to enroll your wards to schools,” Zulum told guardians and parents of the children and wards enrolled.

The governor applauded parents and guardians for the large turnout to present their children and wards for the mass enrollment.

Sunday’s enrollment was the third mass enrollment in schools of displaced children in Monguno town by the Zulum administration.

Amid leading enrollment of children into basic schools, Governor Zulum took time to visit and assess ongoing construction and renovation works at a site he had approved for the Federal Polytechnic in Monguno.

The governor directed the construction of additional hostels, staff quarters and admin block at the Federal Polytechnic.

Zulum had previously approved and released N100m to enable the school to take-off soon after it was approved by President Muhammadu Buhari in January, 2021.

Meanwhile, the governor rounded up Sunday’s inspection at an ongoing construction of zonal office of a newly created monitoring and evaluation unit from which some trained officials will be monitoring government establishments such as schools and hospitals.

Monguno zonal office which is to coordinate oversights of the 10 LGAs in northern Borno senatorial district was at 95% level of completion when Zulum visited on Sunday.

Governor Zulum traveled to Monguno in company of Barrister Mohammed Tahir Monguno who is the Chief Whip of the House of Representatives and APC’s senatorial candidate for Borno North in the 2023 elections.