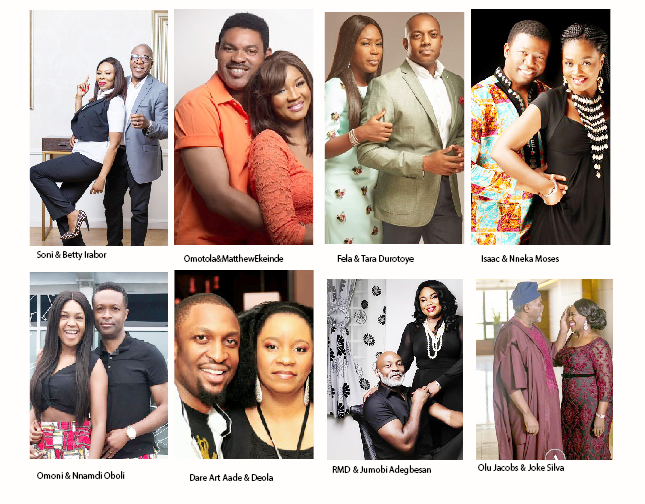 In today’s world, divorce whether quick, clean or messy and protracted – is fast becoming the order of the day, especially among celebrities. Going to court to have their marriages dissolved over infidelity or irreconcilable differences, or whatever reason-seems to have become an everyday phenomenon for stars. However, some couples have been able to stay together, against all odds.

No doubt, there seems to be an upward trend of celebrities marrying other celebrities in Nigeria. The question however is, why are more celebrities tying the knot with each other and will this trend reduce the divorce rate amongst celebs, especially entertainers? Despite the trend, a few Nigerian celebrities have managed to weather the storm. LEADERSHIP Sunday has listed some of the exemplary figures

Veteran Nollywood icons, Olu Jacobs and Joke Silva are unarguably the most successful celebrity couples. They have been married for over 30 years, with grown up children. Infact few years ago, their first child also got married, in a wedding ceremony that was graced by the ‘who is who’, in the Nigerian social scene.

Soni and Betty Irabor are one of the most adorable celebrity couples in Nigeria. They have been married for over 30 years. Soni Irabor is a broadcaster and the Chief Executive Officer (CEO) of Inspiration FM while his lovely wife Betty Irabor is a journalist, an author and a publisher. The couple have been married for over 30 years without any media scandal.

In 2000, famous Nollywood actor Richard Mofe Damijo popularly known as RMD got married to former Africa Independent Television (AIT) presenter, Jumobi Adegbesan. Of course, this marriage has had its fair share of controversies, but the marriage has continued to weather the storm, and lasted for over 20 years.The couple are still together and have grown up children.

One of Nollywood’s finest actress,Omotola Jalade Ekeinde has been married to her pilot husband Captain Matthew Ekeinde for over 20 years and blessed with four children.Inspite of rumours of infidelity on both sides some years ago,the couple have been able to navigate the murky waters of celebrity marriage.they’ve been married for over 20 years.

While Tara Durotoye is the leading pioneer make-up artist in Nigeria, her husband Fela Durotoye is one of the most sought after motivational speakers in Africa and a best-selling author. Tara never ceases to use the opportunity to share some tips on relationship and marriage principles to her fans. According to her voice; “we have committed to making each other happy and making it work as we both come from broken homes.”They have been married for over 20 years.

Since meeting on the set of a movie in 1996, the couple has been inseparable. They both present, produce and direct the award-winning culture and tourism TV show “Goge Africa.” According to her “it is easy because whatever decision we make is in the best interest of our vision and passion.

“There is no superiority contest among us. He sometimes allows me to make decisions and that really makes me feel good” Nneka Moses stated during an interview with the media.The marriage has successfully lasted for more than 20 years.

Tunde and Wunmi Obe, professionally known as T.W.O are a Nigerian showbiz couple, entertainers, television personalities and entrepreneurs. They met and began their music career as undergraduates in the University of Lagos in the early 90s.

In a few months time the couple will be celebrating their 25th wedding anniversary. Tunde Obe via his Twitter platform educated couples and other single individuals on the success of his marriage.He wrote: “2023 will make it 35 years of friendship 25 years of marriage.. People always ask “how did you do it”? I think the easiest way to answer this question is that people stay together because they want to! If you really want to separate from someone, you will find a reason to.. No relationship is perfect#TWO.”The couple are blessed with three children, Modesayo, Ricardo and Andre

Norbert and Gloria Young are top Nollywood actors and pioneers in the Nigerian movie industry The couple have been married for over 15 years. In a chat with the media on the secret to their marriage,he said “love holds us together. There is no special thing that we do to be together.

“There is no special thing we do to keep our marriage. We lead normal lives and do not pretend about it. We do not live above or below our means.The union is blessed with three beautiful kids.

Nigerian singer and songwriter, Darey Art Alade, and his wife, Deola, have been married for 16 years.Despite the 8 years difference between Deola and Art Alade,the marriage has been devoid of media scandals and controversies associated with some celebrity marriages. Darey runs a creative agency, ‘Livespot 360’ with his wife Deola.Their marriage is blessed with two children: Femi and Tinuke Alade.

Nollywood actress and screen goddess Omoni Oboli and her lovely husband Nnamdi Oboli have been married for over fifteen years with three handsome boys.The couple who could be seen as siblings are very much into each other that they do literally everything together. They wear the same clothes all the time, and always love playing together.One seeing them for the first time will mistake them as twins and siblings.

2023: Northwest Will Give Buhari’s 12m Bloc Votes To Tinubu – Musawa

2023: Northwest Will Give Buhari’s 12m Bloc Votes To Tinubu – Musawa