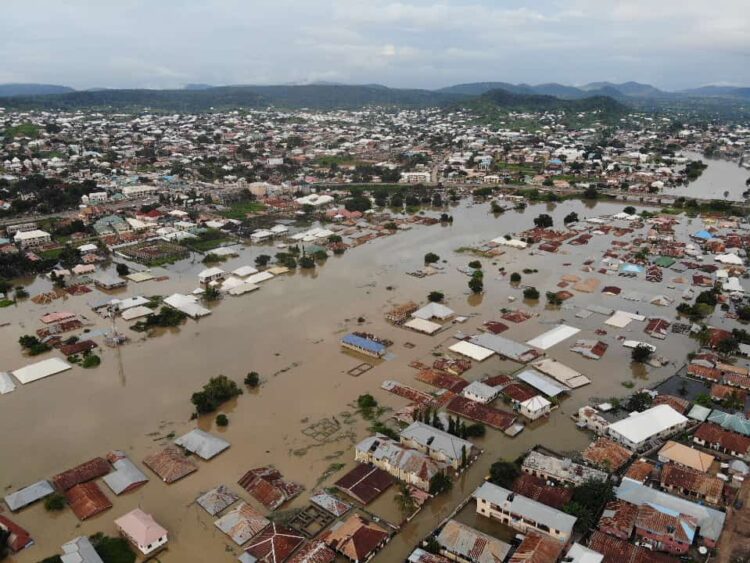 The federal government has said at least 603 people have been killed in floods across Nigeria with 1.3 million persons displaced from their communities.

Some of the states where deaths from floods have been reported include Kogi, Anambra, Kebbi, Delta, Bayelsa, and Jigawa with about 31 states said to have experienced flooding in 2022.

This is even as the hellish condition of those impacted by the flood in several states is intensifying even as the minister of Humanitarian Affairs, Disaster Management and Social Development, Sadiya Umar Farouq, revealed that about 82,053 houses had been totally decimated, 2,504,095 million persons affected, while 332, 327 hectares of land were completely damaged.

Reeling out the figures yesterday in Abuja during a press conference, the minister said though Nigerians could express concerns over the devastating floods across the country, there should be no panic over threats to food security.

Other statistics indicated that the number of injuries is 2,407, while houses that were partially destroyed totals 121,318, and farmland partially decimated is 108,392.

Umaru Farouq said several warnings were issued to all the state governments, but they failed to advance necessary measures to prevent the depth of the devastation.

She stressed that the government must initiate a bilateral discussion with authorities in Cameroon by November 2022 on the periodic opening of the Lagdo dam.

She said: “Although flood has become an annual disaster with devastating consequences and the effect of climate change makes it difficult to prevent in Nigeria, it can be mitigated and managed;

“There was enough warning and information about the 2022 flood but states, local governments, and communities appear not to take heed; thus the meeting agreed to form a high-powered delegation to state governors to advocate for more commitment to strengthen state response mechanisms as stipulated in the National Flood Emergency Preparedness and Response Plan.

“Stakeholders will work within their respective mandates to prevent deaths due to flood or other health-related diseases that are in the aftermath.

“We must initiate a bilateral discussion with authorities in Cameroon next month (November 2022) on the periodic opening of the Lagdo dam. The delegation to Cameroon is to be led by the PS and the Ministry of Foreign Affairs will be requested to facilitate it;

“For a coordinated flood response protocol, the meeting agreed to implement the National Flood Emergency Preparedness and Response Plan; accordingly, the sectoral approach to flood management at the national and sub-national levels must be absolutely implemented.”

The humanitarian minister stated that it was agreed that it had become necessary to compel all state governments to strengthen their SEMAs and LEMCs through a legal instrument so that they could have improved access to funds and personnel for effective disaster preparedness and response.

She, therefore, harped on the need for respective state governments, local government areas, LGAs, and communities to prepare by evacuating people living on flood plains to high grounds, providing tents and relief materials, fresh water as well as medical supply for possible outbreak of waterborne disease.

She maintained that states like Anambra, Delta, Cross River, Rivers, and Bayelsa were still at risk of experiencing floods up till the end of November, urging them to take the needed preventive measures to mitigate the flood.